Couple of sad stories to end the working week. I blogged last week about the book and stationery chain British Bookshops and how it went into administration a couple of weeks back. Well I've just popped up the road to the Lewes branch and there are posters in the windows advertising a closing down sale, with a fair old scrum at the tills of queues of people grabbing discounted cards and books. Now, this may not be the end of the story – the Worthing branch has identical posters in its windows, and yet the administrator is still insisting the chain will continue to trade, and that they're only "using existing signage to ensure there is greater footfall". So it could simply be a case of misleading advertising. But you have to admit, having "closing down" signs in yer windows doesn't exactly engender faith in the future of a company – and it can't be pleasant for the poor buggers who work in the shops, either. I'll keep an eye on how this one develops.

UPDATE 1: Just got a report from a friend that the Burgess Hill branch of British Bookshops is practically stripping the walls bare as the stock goes. Not a promising sign...

UPDATE 2, 8/2/11: Well, it looks as if the Lewes branch of British Bookshops – and a further twenty-one stores – are safe: WH Smith have acquired a big chunk of the chain. The Bookseller story I linked to there has a list of all the other shops that WH Smith have bought, most of which will continue to trade under the British Bookshops name, and it reports that 200 jobs will be saved. So some good news at last, although it's tempered by the fact that there are still twenty-nine British Bookshops branches whose fate is undecided.

On an unrelated note, earlier this week I learned about the death of second hand bookseller Nigel Williams, who passed away on Christmas Eve at the terribly young age of forty-eight. I didn't know Nigel at all, but his shop in London's Cecil Court, just off Charing Cross Road, is one of my favourite places to go and browse and occasionally buy first editions (I wrote about it here). I was up there just the other weekend and was surprised to find it closed. Now I know why. I've spent many a happy half hour in the basement of Nigel Williams Rare Books, gazing at the impressive collection of modern firsts – among them a splendid selection of crime and genre titles – so it was sad to hear of his passing. Hopefully his shop will live on, because it really is a wonderful place to visit. In any case, and for what it's worth, my condolences to his family and friends.

UPDATE 3, 1/4/11: Sadly, I believe Nigel Williams Rare Books did, in the end, close for good; the link above no longer works, and the shop is no longer listed either on the The Book Guide or on Cecil Court's website. A shame, but understandable. I'll miss the place. 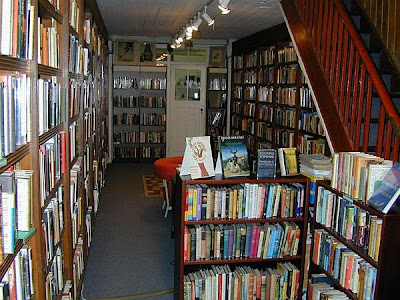