Rabe in Hardback: Anatomy of a Killer by Peter Rabe (Abelard-Schuman, John Sewell Cover), and its Influence on Richard Stark / Parker

Back at the start of this series of posts on cult crime writer Peter Rabe, I mentioned that Rabe is the uncrowned king of the pulpy paperback novel. Like John D. MacDonald and Jim Thompson, the paperback was both Rabe's natural home and a format that sidelined him unfairly. Because, also like MacDonald and Thompson and a select few others, while the paperback format seemed to suit his stories of gangsters and bad men and lowlifes, Rabe's writing was a cut above that of his fellow softback hacks.

MacDonald and Thompson both had novels published in hardback in their lifetimes, however. Only a handful in Thompson's case, mostly at the beginning of his career, but that's still more than Rabe. Peter Rabe only made it into hardback three times in his lifetime (and, I think, only once after he died, thus far anyway). The first time was in 1955, when Vanguard in the US and Frederick Muller in the UK published his little-remarked-upon non-fiction title From Here to Maternity, a humorous look at the birth of his first son, complete with line drawings by the author. The last time was in 1967, when Herbert Jenkins in the UK issued a hardback of his earlier Gold Medal paperback My Lovely Executioner; I was hoping to be able to show the Herbert Jenkins edition, but like the paperback of Time Enough to Die I mentioned yesterday, the copy I ordered has vanished in the post.

I can, however, show you the book published in-between those two, the only novel of Rabe's to be issued straight to hardback in his lifetime: 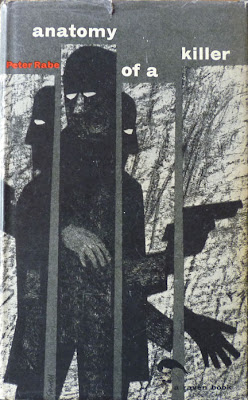 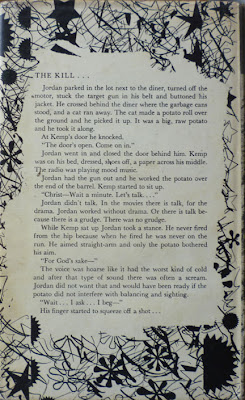 Anatomy of a Killer was published by Abelard-Schuman simultaneously in the US, the UK and Canada in 1960. According to George Tuttle's interview with Peter Rabe, the story was, like The Cut of the Whip, rejected by Gold Medal, Rabe's usual publisher, so Abelard-Schuman, who were a British publisher, picked it up instead. The plot concerns Sam Jordan, a professional killer who, as the dustjacket flap blurb has it...

...[had] honed his nerves down to a fine, taut edge and turned himself into a ruthless precision machine for killing—a cold-blooded automaton who dealt out controlled violence. He had this trick on a job of splitting himself in two—head over here, guts over there in a box—and that way everything went off smoothly and efficiently. That way there were no feelings, because Jordan couldn't afford them.

Hmm... "A ruthless precision machine... a cold-blooded automaton... no feelings..." Now who does that remind you of? Could it be Donald 'Richard Stark' Westlake's character Parker? I've written about the similarities between Rabe's work and Westlake's before, and how Rabe's writing – and in particular his Daniel Port novels – influenced Westlake enormously. But it's possible that Anatomy of a Killer exerted the biggest influence of all. It was published just a couple of years before Parker debuted in The Hunter, and Westlake himself said of the novel, "Anatomy of a Killer is as cold and clean as a knife... a terrific book." But I think the strongest evidence comes from the opening scene in the book, which begins exactly like a Parker novel, even down to starting with a "when":

When he was done in the room he stepped away quickly because the other man was falling his way. He moved fast and well and when he was out in the corridor he pulled the door shut behind him. Sam Jordan's speed had nothing to do with haste but came from perfection.

The door went so far and then held back with a slight give. It did not close. On the floor, between the door and the frame, was the arm.

He relaxed immediately but his motion was interrupted because he had to turn towards the end of the hall. The old woman had not stepped all the way out of her room. She was stretching her neck past the door jamb and looking at him. "Did you hear a noise just now?"

"Yes." He walked toward her, which was natural, because the stair well was that way. "on the street," he said. "One of those hotrods."

"Did you just come from Mister Vendo's room?"

Jordan walked by the old woman and started down the stairs. She shook her head and said, "That racket. They're just like wild animals, the way they're driving," and went back into her room.

He turned when her door shut and walked back down the hallway. This was necessary and therefore automatic. He did not feel like a wild animal. He did his job with all the job habits smooth. When he was back at the door he looked down at the arm, but then did nothing else. He stood there with his hand on the door knob and did nothing.

The terse dialogue, the short, plain, sentences: that's a Parker in all but name. Stark House Press brought Anatomy of a Killer back into print in 2008 as a double-novel with A Shroud for Jesso, so should you wish to make your own Parker comparisons, you don't have to go to the trouble of getting an expensive (anything from thirty to a hundred quid for a nice copy) first edition to do so.

The dustjacket on the Abelard-Schuman edition was designed by the late John Sewell, who was rather an interesting man in his own right. He created quite a lot of covers for Penguin, including F. Scott Fitzgerald's Tender is the Night and The Last Tycoon. He also made short films. In 1954 he became the first graphic designer to be recruited by the BBC, and headed up a whole department creating screen graphics in the 1950s, although little of his work survives. There's an appreciation of his book cover work on this blog. His jacket for Anatomy of a Killer is typical of his scratchy illustration and cut-up design style; it certainly makes a change from the more lurid efforts on the Gold Medal paperbacks of Rabe's novels.

And that's about it for this series of posts on Peter Rabe – at least until the two books I ordered that have gone AWOL turn up, anyway.
Posted by Nick Jones (Louis XIV, the Sun King) at 05:45