Would you Adam and Eve it. No sooner had I dotted the 'i's, crossed the 't's and drawn a line under my week of posts dedicated to Peter Rabe, but the two Rabe books which I had a moan about going missing in the post finally turned up, three months after I ordered them. And here they are: 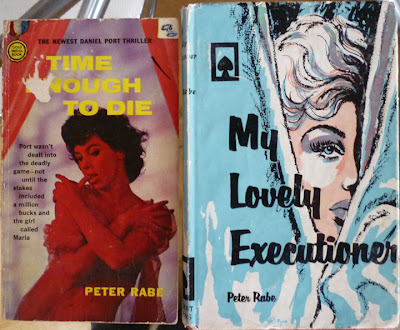 On the left is the UK 1961 printing of the 1959 US Gold Medal paperback of Time Enough to Die, the final Daniel Port novel, and on the right is the 1967 UK Herbert Jenkins hardback edition of My Lovely Executioner. I'll be posting something about that second one – which is one of only two Rabe novels to be published in hardback in his lifetime – soon enough, but in the meantime, I've now updated this Daniel Port cover gallery with the back cover for Time Enough to Die. Thrilling stuff, eh? As to why I ordered these books from New Zealand of all places, well, it was the only seller who had copies of both. There are no copies of Time Enough to Die available from UK sellers online, and as for the hardback of My Lovely Executioner, there are only three other copies for sale anywhere on the web. One of those I know has a soiled, rather poor dustjacket, and the other two are forty and fifty quid. So that's why.
Posted by Nick Jones (Louis XIV, the Sun King) at 08:30