Following on from yesterday's post on cult crime author Peter Rabe's novel The Out is Death, which, as we all know (if we've been paying attention, that is), stars Rabe's occasional antihero Daniel Port, today I'm posting a Daniel Port cover gallery, featuring the original American covers (or in some cases the British printings) for all six books in the loose series. But as is often the way with best laid plans – and I have been planning this gallery for quite a while – there's a slight drawback: I don't have all six books. I figured I would by now, but unfortunately the final book in the series, Time Enough to Die, is either lost somewhere in the various postal systems between New Zealand – from where it was ordered – and Lewes – where it was supposed to arrive well over a month ago – or in the hands of an evil wayward postal worker, who has purloined it for their own reading pleasure, the git. So basically, I'm a Port short.

UPDATE: At least, I was a Port short when I originally posted this. But as trumpeted here, that missing book arrived a couple of days later. So now we really can sally forth and get this show on the road, beginning with: 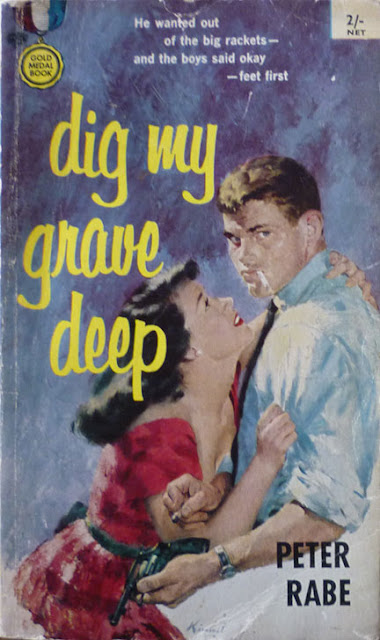 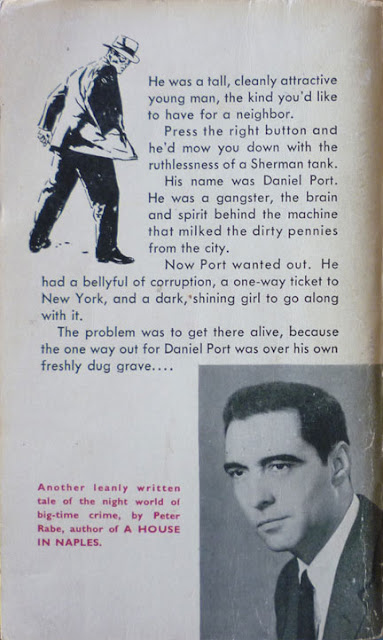 Dig My Grave Deep, published by Fawcett/Gold Medal in 1956, although seen here is the UK printing from 1957, published by Frederick Muller. Muller picked up countless Gold Medal titles for publication in Britain from the mid-'50s through to the mid-'60s, usually issuing them a year or two after their US debut with only minor changes to the covers – a British price instead of an American one – and the copyright page. Essentially, though, they're the same as the US editions. The cover artist is Lu Kimmell, whose painterly, naturalistic work graced many a Gold Medal, not to mention a good number of Signet editions of Mickey Spillane novels (I, the Jury, My Gun is Quick, etc.). I've got a wee bit more about Dig My Grave Deep here, and there's a 1001 Midnights/Mystery File review here. Next: 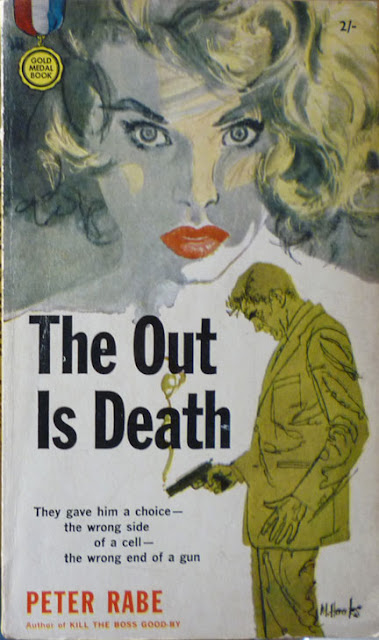 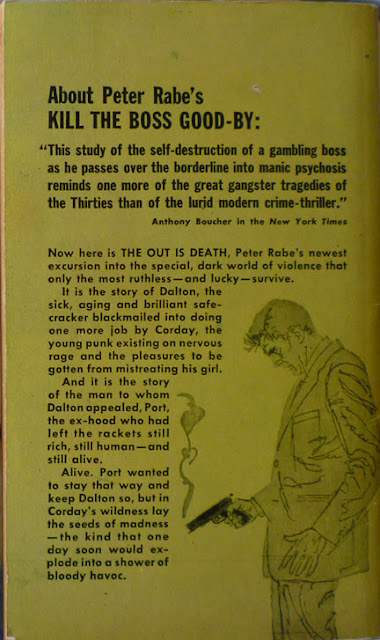 The Out is Death, as featured yesterday, although I've just noticed that the estimable Wallace Stroby has a few words on it too. This second Port story was published in the US by Gold Medal in 1957, but again, the edition seen above is the Muller one from 1959. Mitchell Hooks is the cover artist here, and there's an excellent appreciation of his work on the Today's Inspiration blog. And also published in the US in '57 and the UK in '59 was this: 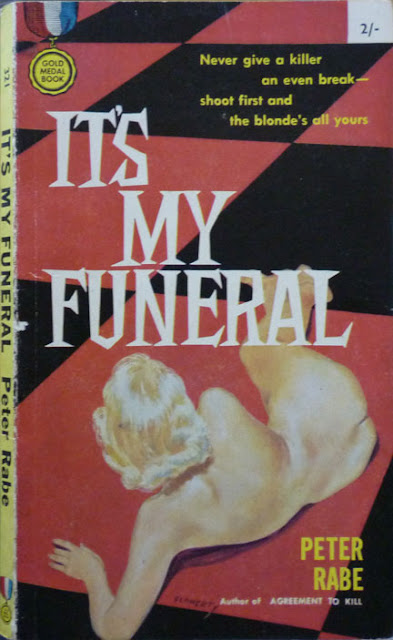 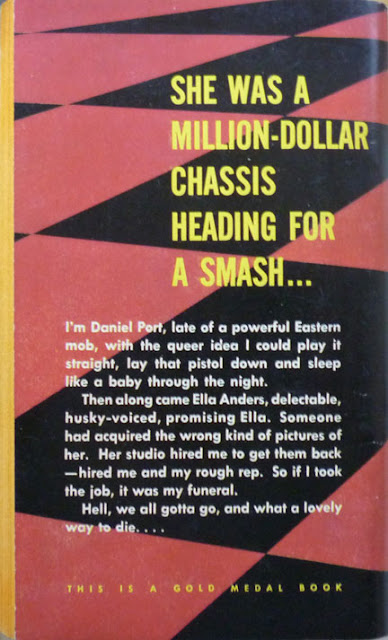 It's My Funeral, the third Port novel. This one's a fairly recent acquisition, so plot-wise all I've got to go on is the back cover copy and a page one excerpt which details Port's efforts to unhook a bra. You can see the audience the publisher was aiming at... The cover also sets its sights firmly on the sleazier end of the paperback market, but it's a striking piece, the naked blonde almost forming a cut-out negative shape on the abstract red and black floor. It's by Jack Floherty, Jr. sometimes credited as John Floherty, Jr., and bizarrely – and presumably mistakenly – credited as Jack Floberty, Jr. inside the book itself. There's a short bio for him here. I think this is my favourite of the Port covers. It's certainly snazzier than this next one: 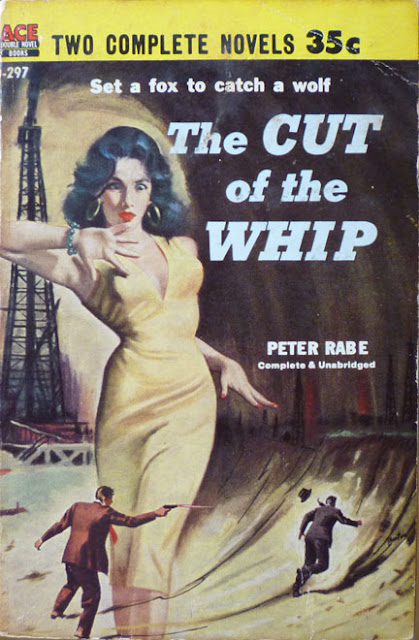 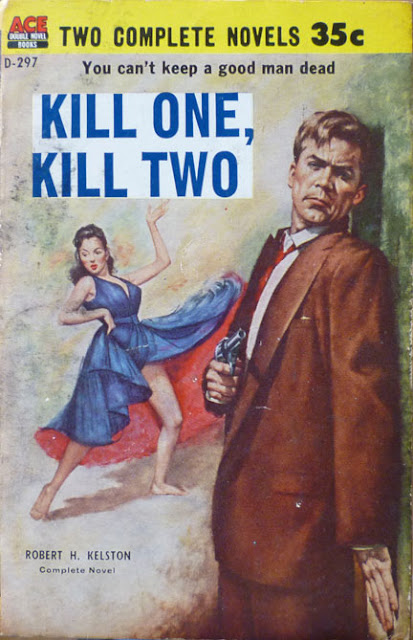 The Cut of the Whip was published in the States not by Gold Medal but by Ace in 1958. As you can see it was published as one of Ace's Double Novels, with Robert H. Kelston's Kill One, Kill Two on the flipside – I wrote a bit about Ace doubles, and about The Cut of the Whip, here. The cover art on the Rabe side is by Bernard Barton, who's a bugger to Google as there's a well known poet with the same name. But even given that, there doesn't seem to be much online about him, although he did do a number of other covers for Ace, including this Sam Dakkers tale. He may also have had a thing for really massive women. The Cut of the Whip was published by Ace because Gold Medal rejected it, but Daniel Port returned to Gold Medal for his next outing: 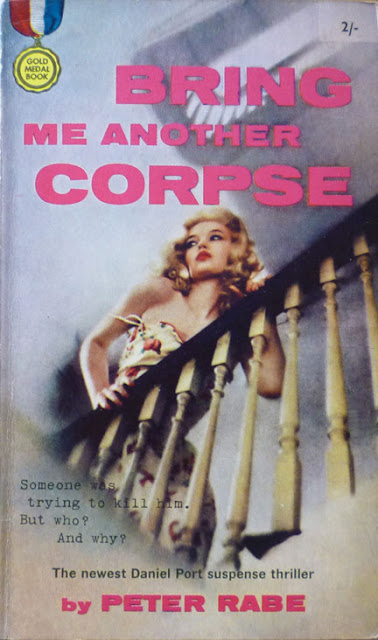 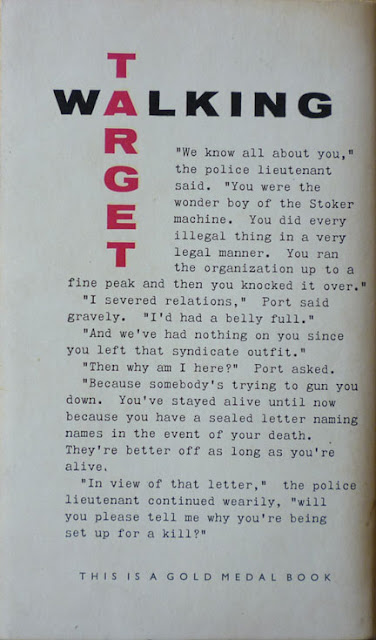 Bring Me Another Corpse, the fifth Port novel, published in the US in 1959 (1960 UK Muller printing seen above). The plot places Port front and centre as the target of a killer, but I can't tell you who the cover art is by, possibly because it's a photo, not an illustration. It does look kind of photographic, but not as photographic as the cover for Port's final appearance: 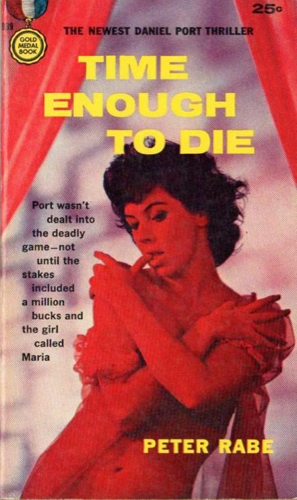 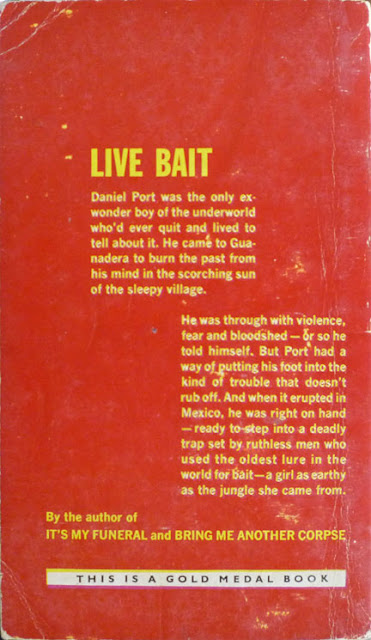 Time Enough to Die was once again published by Gold Medal in 1959 (1961 in the UK by Muller), with a cover that reminds me of a Soho peep show (not that I've ever frequented such a place). It's set in Mexico, and Peter Rabe intended it as a new beginning for Port. As it turned out, it was quite the opposite, and the series ended here, leaving Port south of the border, perhaps living out the rest of his life drinking cold coffee and whistling Mexican ditties to himself.
Posted by Nick Jones (Louis XIV, the Sun King) at 04:18