I mentioned on Friday that the Lewes Book Fair was on this weekend – Saturday to be exact – and that I might end up with a book or two to blog about as a result. But as it turned out I came away with a bulging bag full of the buggers (and as a consequence slightly did me back in, pathetic weakling that I am)... and then bought another one down the road in one of Lewes's antique shops – where, incidentally, an episode of Bargain Hunt was being filmed at the same time, two teams of blue and red sweatshirt-wearing fogies and attendant camera crews/ producers/assistants periodically trapping us in the establishment's labyrinthine crannies. And not only that, but local thesp/comic Mark Williams was in Bill's Produce Store/Cafe buying some oranges. It's all go in Lewes...

Anyway, run by the Paws & Claws Animal Rescue Service (n'awww), the Lewes Book Fair takes place five times a year in Lewes's Town Hall, and it's always busy, both with hardcore bibliophiles hunting for elusive volumes and chewing the fat with dealers (or indeed, as was the case with one conversation I gatecrashed, discussing the relative merits of Vampire Weekend and Fleet Foxes), and with the more casual browser and curious passerby. There's usually a good selection of everything from local history to military and naval tomes, children's books, art books, ephemera and fiction, but prices range all over the shop, from the ridiculously overpriced to the ridiculously cheap. Keep your wits about you and you can certainly pick up a bargain; get too overexcited and you can end up spending way too much on something you'll find a lot cheaper online.

By way of example, here's one book wot I bought at the Fair (I'll be blogging about the others over the course of the coming week, you lucky people you): 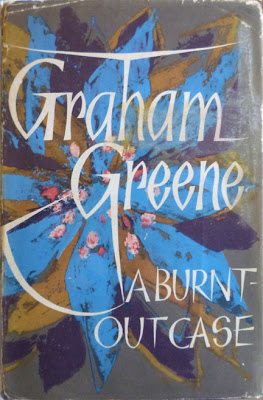 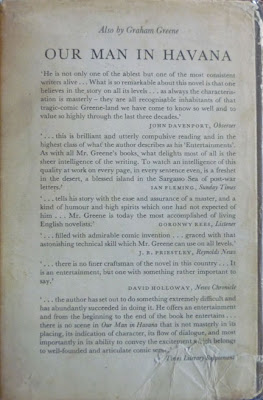 That is the UK hardback first English edition of Graham Greene's A Burnt-Out Case, published by Heinemann in 1961 (it was originally published – in Swedish – by Norstedt and Soner in 1960). According to the blurb on the dustjacket flap:

The background of Mr. Greene's new novel is Africa – not the Africa of The Heart of the Matter but the Belgian Congo. A stranger arrives at a leper village there. He has come from Europe, out of a past that no one knows, with what object no one knows. The river boat goes no further is his only explanation. As the story progresses the reader begins to feel a relationship between the stranger and the lepers. A leper who is cured has sometimes gone first through the stage of mutilation – he is known then as a 'burnt-out case'; the stranger too has gone through the stage of mutilation: of the mind in his case, not of the body. His sickness is approaching a cure when the small white world of the Congo province discovers his identity...

There's a contemporaneous New York Times review here, a more recent blog review here, and you can read Greene himself on the novel here.

The rather lovely dustjacket – which is by Lacey Everett, whose decorative designs also adorned novels by Aldous Huxley (the 1964 Penguin edition of Island) and John Steinbeck (the 1961 Heinemann edition of The Winter of Our Discontent) – isn't, as you can see, in the best condition, but it's virtually complete, still fairly bright, and not price-clipped. The case and book, meanwhile, are both very good, with just the slightest hint of foxing on the edges of the otherwise cream pages. I paid £7.50 for this one, which I reckon was a good price, even given the condition of the wrapper. But just yards away, on another stall, a very similar copy was on sale for the rather more eye-watering sum of £180. So you see how a person can get stung if they're not careful...

A last aside: I remember Book Glutton left a comment on a post ages ago about how Greene used to divide his canon into 'novels' – i.e. what he considered to be his more serious and worthy efforts – and 'entertainments'. What I didn't realise was that his works were categorised as such even in his own books, as the page on the left here demonstrates: 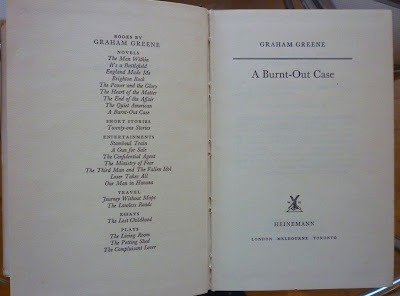 I was thinking of introducing a similar system on Existential Ennui, but then I remembered that virtually nothing I write is ever serious, or worthy, or indeed terribly entertaining, so that was that.
Posted by Nick Jones (Louis XIV, the Sun King) at 05:53