Notes from the Small Press 7: The Comix Reader #1 – A Review

Actually, in fairness, this latest instalment in this series of posts about small press comics should really be titled Notes from the Rather Large Press. Because The Comix Reader, the first issue of which landed in shops at the tail end of 2010, had a print run of 9,000. And not only that, it's a good fifteen inches tall and nearly twelve wide. That's pretty big in my book. 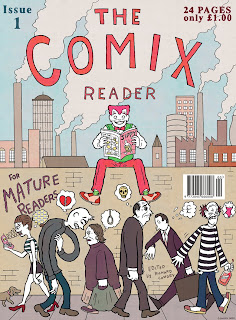 The brainchild of Richard Cowdry, the man behind intermittent anthology The Bedsit Journal, The Comix Reader is a bold attempt to bring the kinds of left field, underground comics found in small press titles to a wider audience. As such, and without even addressing whether it's any good or not, it's to be applauded, standing, perhaps even with some cheering mixed in. Cowdry and co. have taken a big punt here – he and the other comics creators herein financed The Comix Reader out of their own pockets – and I hope it pays off for them, all the more so because not only is it a brave thing to be doing in The Current Climate – indeed Any Climate so far as the notoriously cautious and conservative comics audience goes – but the stuff between the covers – and on the cover – is really rather good.

Cowdry's editorial approach is to give each artist a page on which to do whatever they please, in full colour – or black and white if they so choose – so the comic strips vary wildly. Even so, there are themes and styles that can be identified.

Some of the cartoonists demonstrate a familiarity and an affinity with British boys' comics, specifically humour titles like The Beano and The Dandy. (I'm sure the fact that The Comix Reader is printed on newsprint enhances that perception.) Cowdry himself is very much in that school, except he warps that British tradition through his observational approach and psychological and emotional quirks and preoccupations – his two pages of four-panel strips runs the gamut from self-obsession to social faux pas. Alongside him stand the likes of Lawrence Elwick and Paul O'Connell (with a nice bit of Harold Lloyd-style slapstick), Hurk, Alex Potts, and Paul Brown. Saban Kazim's "Just Go Straight" on the back cover may owe something to that tradition too, but either way his extended slice-of-life gag, starring a maniacal kebab shop owner, made me smile. 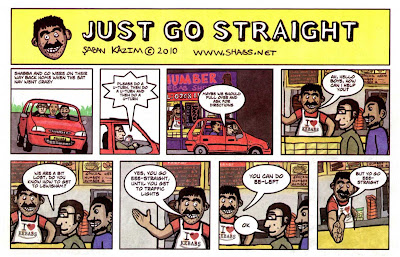 More recognizable as art comix are Tobias Tak, Kat Kon, Gareth Brookes – whose beautiful illustrative page features poetry-spouting dickiebirds, done in a style that reminded me of Anders Nilsen – and alt. comix queen Ellen Lindner, whose sublime, spot-on "Festival Fashion Throwdown" pits cosplay nerdfest MCM Expo attendees against uber-cool indie types from seaside holiday camp festival All Tomorrow's Parties. Alongside, or perhaps outside(r), those, are Tim Levin, Jimi Gherkin and Peter Lally, all of whom, either in approach or temperament, wander far enough away from the norm to make themselves notable. 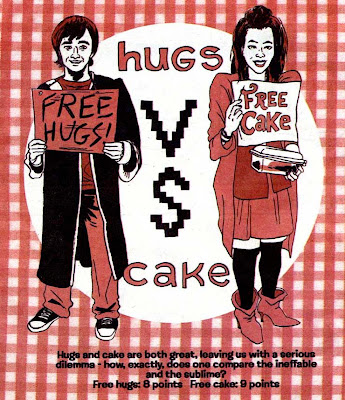 And there's still more besides. I really liked Bird's comic about impending death by comet, a beguiling mixture of Mr Ben/children's storybook-style drawing and unexpected introspection. I also liked Steve Tillotsen's elliptical trip to the zoo, as undertaken by a Neon Genesis Evangelion Angel and a man-cat – shades of Trondheim in that one, I reckon. 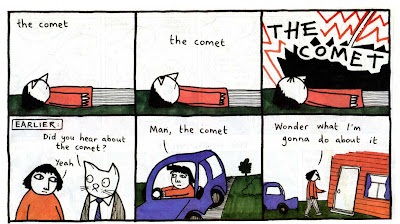 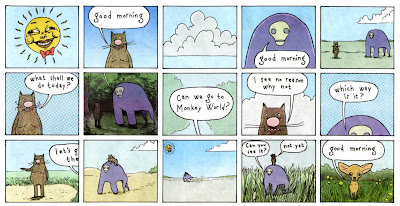 Quite honestly, there wasn't much I didn't like in The Comix Reader. It is, at £1, bloody good value for money. And as well as being, as I said near the beginning of this post, an experiment well worth supporting, it's also, like Fast Fiction Presents: The Elephant of Surprise and Small Pets before it, a useful snapshot of the UK small press scene at the moment. There really is no reason not to pick it up next time you're in a comic shop. So do. 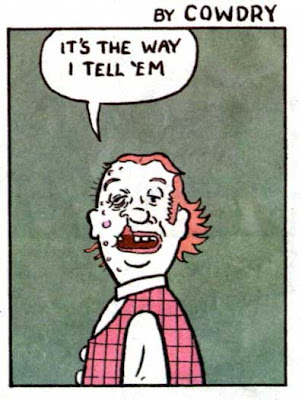