From the Lewes Book Fair: The Prisoner in the Mask by Dennis Wheatley (Hutchinson First Edition)

Next in this series of posts on the books that I did buy at Saturday's Lewes Book Fair, we have this: 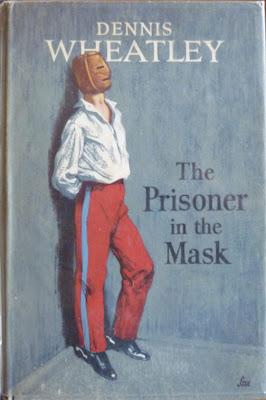 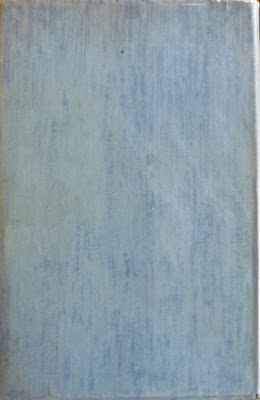 A 1957 UK hardback first edition of The Prisoner in the Mask by Dennis Wheatley, published by Hutchinson. I picked this up for a few reasons. For one, I really liked the dustjacket, which is by an artist called Sax, about whom I know next to nothing, other than he painted a number of covers for Wheatley's novels and that he did a lot of work for Hammond; there's a partial list of his covers here. Sax also created the rather smashing endpapers for The Prisoner in the Mask – the kind of elaborate ends you just don't get on novels anymore: 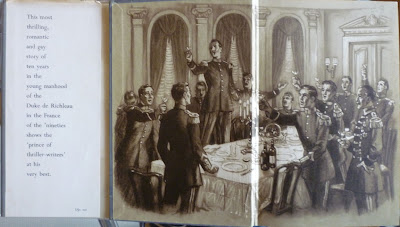 For another, Wheatley is one of those thriller writers who's fallen out of fashion but whose novels you see everywhere if you're any kind of second hand book hound. He was phenomenally successful in his day, selling in the multiples of millions, his novels ranging from historical thrillers to contemporary suspense and the occult (his most famous books is probably The Devil Rides Out). The press blurbs on the back flap of The Prisoner in the Mask – which is part of his historical series starring the Duc de Richleau; it's actually a prequel featuring the young Duke – are a testament to the high regard he was held in:

"The prince of thriller-writers" – Times Literary Supplement
"Public thriller-writer No. 1" – Observer
"The most successful adventure-writer of our time" – Daily Mail

He was also a fascinating man, as this profile on the Dennis Wheatley Website reveals (that site also has an extensive bibliography). Apart from anything else he was responsible for introducing the population of Britain to many aspects of the occult – or at least his interpretation of them: the Fortean Times has a lengthy article about his influence.

And my final reason for buying the book was, it was so bloody cheap. Two quid for a first edition was, frankly, irresistible – that's less than you'd pay for postage on a book ordered off the internet. The Lewes Book Fair (indeed all book fairs) always has a selection of stalls selling dead cheap books, which is yet another reason why book fairs are worth popping along to. Often the books are jumbled up on shelves, so you have to sift through a lot of crap to find the gold, but it can be worth it; I found a similarly-priced Ross Thomas first edition at the previous Lewes Book Fair. And the next book I'll be blogging about from Saturday's Fair was just as much of a bargain...
Posted by Nick Jones (Louis XIV, the Sun King) at 06:40