From the Lewes Book Fair: The John Wyndham Omnibus feat. The Day of the Triffids, The Kraken Wakes, The Chrysalids (Michael Joseph, 1964)

Are we bored of these posts about the books I bought at the recent Lewes Book Fair yet? Well, tough. And anyway, we're nearly done now: there's only one more to come after this one. And anyway, er, again, I've been saving the best till last. Or maybe second-to-last, because I think this next one is my favourite Fair find: 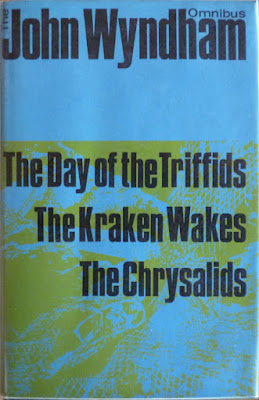 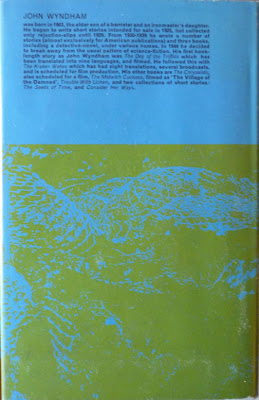 It's a UK hardback first edition/first impression of the very first (that's a lot of firsts; ooh, look, there's another one) John Wyndham Omnibus, published in 1964 by Michael Joseph. As you can see from the front cover, it comprises Wyndham's first (oh enough with the firsts already) three novels – or rather, the first (sigh) three under that particular name; he had four novels published variously under the names John Beynon and John Beynon Harris before that (Wyndham's full name was John Wyndham Parkes Lucas Beynon Harris – there's an excellent piece on his early writing here). The copyright line inside the Omnibus has the dates 1951 (which would be The Day of the Triffids), 1953 (The Kraken Wakes), 1955 (The Chrysalids) and 1964 (the Omnibus itself).

I have read The Day of the Triffids, and the later The Midwich Cuckoos, both of which are darn fine novels. I also have a fondness for the 1981 BBC Television adaptation of The Day of the Triffids – although the 2009 version should be avoided at all costs. But I've always wanted to read The Kraken Wakes in particular, and first (now, come on, let's not start that nonsense again) editions of that being a little pricey, this Omnibus, which cost me fifteen quid at the Fair (less than half what you'd pay online), and which is in cracking condition, will do just fine. Not least because I really like the dustjacket on it, which was designed by Eric Ayers, who also designed covers for the Weidenfeld & Nicolson first (gah!) UK edition of Nabokov's Lolita (scroll down in that link to see the correct cover) and for Buster Lloyd-Jones's The Animals Came in One by One. And not only that, but he designed the typography for the 1970 David Hockney-illustrated edition of Six Fairy Tales from the Brothers Grimm.

So there you go. That leaves just one more post to come in this Lewes Book Fair series. Although that post will actually feature two books...
Posted by Nick Jones (Louis XIV, the Sun King) at 06:53