Ross Thomas Week: The Fools in Town Are on Our Side (Hodder First Edition)

Right then, as promised on Friday, let's get going on Ross Thomas Week – a week's worth of posts devoted to the American author of a diverse list of thrillers, spy novels, crime fiction and all manner of other types of book besides. Why Ross Thomas and not, say, Gavin Lyall, or Peter Rabe, or any of the other writers I'm interested in? Well, frankly, why the hell not. Thomas is exactly the kind of author I like to celebrate on Existential Ennui: an underappreciated, increasingly overlooked writer possessed of an understated, elegant style and a flair for naturalistic dialogue who could turn his hand to pretty much any kind of novel.

In his thirty year career, Thomas penned twenty novels under his own name and a further five under the nom de plume Oliver Bleeck. I've read two-and-a-half Ross Thomas novels (I'm midway through one at the moment) since Book Glutton tipped me off about him, and I've been surprised and delighted by each one. I'm sure I'll get round to devoting a week's blogging to some of the other authors I admire – in fact I'm positive I will with one of them, and pretty soon too – but Thomas has been on my mind and in my collecting sights recently, and there isn't nearly enough current interest in him on the 'net for my liking, so this week, Ross Thomas Week it is.

I blogged about Thomas initially here, and then had a run of posts on his quartet of espionage novels centring on the bar Mac's Place here, here, here and here; if you don't know Thomas' work, do yourself a favour and go and follow some of the links in that first post, which were kindly provided by Book Glutton (there's not a great amount of info on the author online; like a lot of 20th century writers who died before the internet really got going, he seems to have fallen through the cracks slightly). There's also a fine appreciation here. Over the next few days I'll have lots of little-seen UK Ross Thomas book covers – including two featuring some quintessentially 1970s photography by Beverley le Barrow – a review or two, a very interesting (to me, anyway) behind-the-scenes peek at how publishers used to go about making changes to different editions of books, and whatever else I can come up with besides.

And I'll be taking the books I have to show in order of publication, beginning with this: 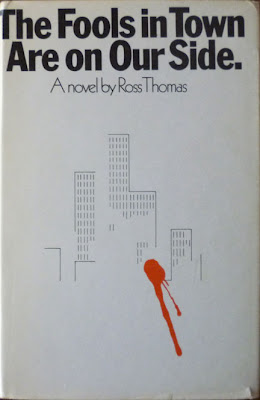 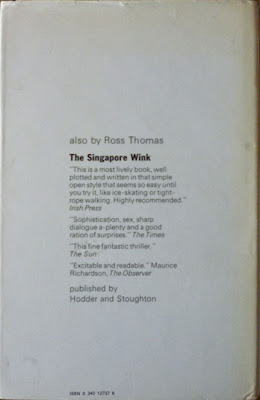 The UK hardback first edition of The Fools in Town Are on Our Side, published by Hodder & Stoughton in 1970 (published by Morrow in the States). This was Thomas' fifth novel under his own name – sixth including his 1969 Oliver Bleeck book The Brass Go-Between – and it's one of his best-regarded. Written in the first person, it follows blown US intelligence agent Lucifer C. Dye's attempt to corrupt an entire city.

There aren't that many copies of this Hodder edition for sale online, and those that are for sale average thirty or forty quid. Luckily, I seem to be the only person in the UK hunting for Ross Thomas first editions at the moment – although that may change after this week – so I managed to find a fairly cheap copy. I much prefer the design of the UK first edition dustjacket to the American one, which looks like this: 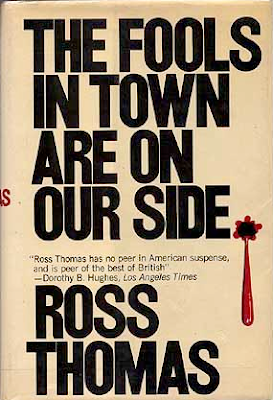 The British cover design is credited to Wilson Buchanan, about whom I've been able to discover practically nothing, except he also designed these two covers: 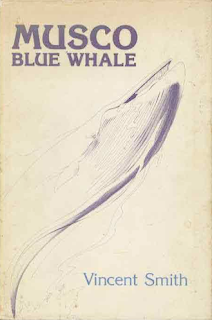 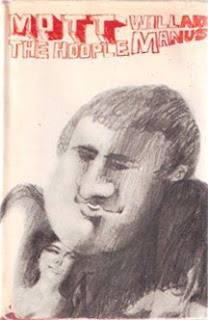 Both of which are also rather good, in a restrained sort of way. There is, however, a cracking typo in the prelims of the Hodder edition of The Fools in Town Are on Our Side. As I detailed in this post, Thomas' first novel, 1966's The Cold War Swap, was initially published in the UK in 1967 under the title Spy in the Vodka, also by Hodder. 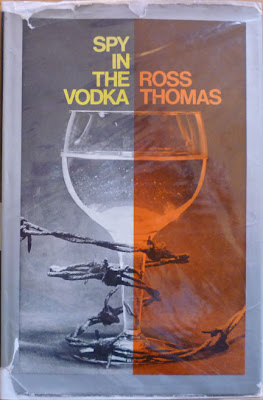 However, when it came to creating the prelims for The Fools..., someone in Hodder's editorial department was evidently afflicted by a slight brain freeze, because what's actually listed under "Also by Ross Thomas" opposite the title page is this: 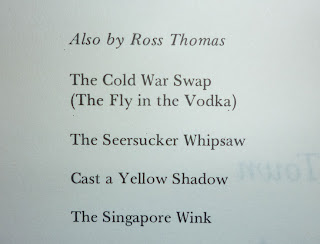