Final post about the Lewes Book Fair (first and second parts, if you're a particular glutton for punishment), which took place at its regular venue of Lewes Town Hall on Saturday. If you're curious as to what it looks like, Book and Magazine Collector ran a feature on it this month; the article and some of the photos can be found here.

Existential Ennui seems to have a sizable US audience these days (not to mention Canadian, Australian, French, German, Dutch, South Korean... I could go on; hello, wherever you are), and I'm not sure how au fait our American cousins are with the concept of book fairs (not that there's much of a concept there). So for any passing Yanks, or indeed anyone else who's never been to one, book fairs are essentially one-day (for the most part) marketplaces for bibliophiles, held in town halls, community centres and the like, with a selection of book dealers flogging their wares. They range in size from small, provincial affairs with ten or twenty dealers (I blogged about one of these, the Pevensey Book Fair, a year ago) to big city, weekend-long events like those held in London's Chelsea and Bloomsbury. Book fairs burgeoned in the 1980s, and while bricks and mortar bookshops are on the wane, book fairs are still going strong, with up to forty or fifty taking place in a single month in the UK.

I've only really started going to book fairs in the last couple of years, but I did spend many years prior to that going to comic marts, which are the comics equivalent. The best way to approach both, I find, is with an open mind; by all means take along 'wants lists' of particular books or comics (and Lord knows that's exactly what I did, many, many times, in that increasingly strange and distant era before the advent of internet shopping), but you'll get more out of a book fair (or comic mart) if you simply browse each dealer's stock carefully and have a look at anything that seems interesting. You might not find something you've been actively searching for at a book fair, but you're guaranteed to find something you didn't know you wanted.

Case in point, the Lewes Book Fair on Saturday, which seemed stronger on my area of interest – modern firsts – than usual. There were a fair few James Bond firsts on display, as well as early firsts from Raymond Chandler and Graham Greene, all of which were well out of my price range. I did see a copy of Our Man in Havana that I could've afforded, but the dustjacket was a little tatty, and anyway I've still got The Honorary Consul to read. I also manhandled a first edition of Robert M. Pirsig's Zen and the Art of Motorcycle Maintenance – a book I loved years ago, recommended to me by a tutor on my art foundation course at Ravensbourne – which seemed remarkably cheap, before I realised it was a fourth impression and put it back.

But apart from the Ross Thomas and John le Carre firsts I blogged about over the weekend, I also bought two books I wouldn't ordinarily have gone out of my way to purchase. First up: 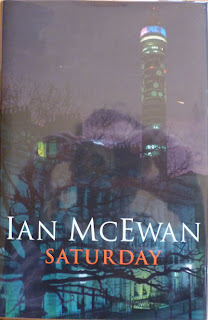 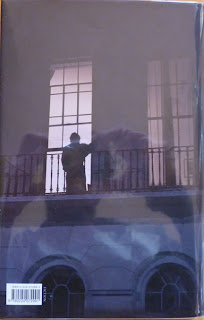 A UK hardback first edition/first impression of Ian McEwan's Saturday, published by Jonathan Cape in 2005 (with, once again, me reflected in the protective dustjacket sleeve... I really must get a scanner at home). This is one of those books that falls into the category marked 'always wanted to read but never quite got around to getting', so it's perhaps not quite a completely out-of-the-blue buy. But it was in fine condition for a good price, so I figured, why not? It's a very well known novel, set during the February 2003 anti-war marches, which is part of the reason I wanted to read it.

And the other book I got was this: 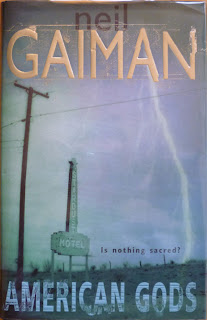 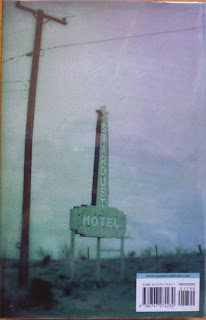 A UK hardback first edition/printing of Neil Gaiman's American Gods, published by Headline in 2001. This really was an unexpected purchase; I've read and liked lots of Gaiman's comics work (The Books of Magic, parts of The Sandman, his underrated and still unfinished Miracleman run, the Death miniseries, and more besides) and the thoroughly amusing novel he wrote with Terry Pratchett, Good Omens, but I've never tried any of his other novels. This copy of American Gods was pristine and only a tenner (bought from the same guy who sold me Saturday and A Perfect Spy), which is a damn sight cheaper than firsts go for on AbeBooks, where, ex-library copies aside, there are very few UK first editions listed, and the couple that are listed are at least thirty quid. I liked the sound of the myths 'n' Americana story, so I bagged it.

And yes, I know more recent UK paperback printings boast the Gaiman-preferred expanded text, which was originally only available in the 2003 Hill House limited edition, but this hardback looks plenty big enough to me. I've got quite enough books to read as it is; a potential additional 12,000 words in American Gods is, like, half a Richard Stark novel, near enough. Gotta get yer priorities straight, innit?
Posted by Nick Jones (Louis XIV, the Sun King) at 06:31