First up, an admission: this is the second version of this post I've had to write. That's because Blogger, as is sometimes its wont, went off the deep end just as I was putting the finishing touches to the original version and deleted the entire draft. Consequently, and despite much furious keyboard bashing and fruitless back-searching, I lost the lot, which was, and continues to be, really, really annoying, particularly as I was rather pleased with that version. Although, now I come to think of it, there might be a proverb about that; something about pride and falling over. I dunno; I'm too furious to contemplate it right now. Anyway, I can only apologise if this post is a bit sub-par – I mean, more sub-par than normal. If it's any consolation, it was written with steam coming out of my fucking ears.

So then. Where were we? Ah yes. As that mouthful of a post title suggests, continuing this somewhat random week of round-ups, catch-ups, and comics archaeology, today I've got three books with absolutely nothing in common other than they were all bought at various venues around Lewes, the East Sussex town in which I live (previous Lewes Book Bargains can be found 'ere, 'ere, 'ere, and 'ere). However, as with yesterday's post about Kate Atkinson, today, along with my by-now traditional and incredibly informative ramblings about novels and authors and the like, I'll also be looking at these three books with my design head on – which is similar to my regular head, except slightly better proportioned and with a more stylish haircut – and formulating a number of highly speculative, shapeless, badly though out points about their covers. Oh you lucky, lucky people, you.

And let's begin with the most recent book bargain: 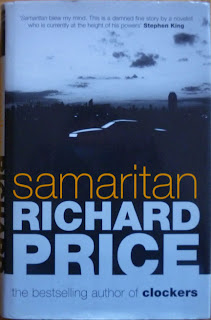 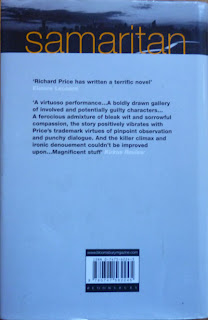 A UK hardback first edition of Richard Price's Samaritan, published by Bloomsbury in 2003. Price, for those who don't know, is a writer's writer, i.e. the kind of writer other writers admire and aspire to be as good as, or at least approach. David Simon made use of his talents on a number of episodes of The Wire, while the likes of George Pelecanos and Dennis Lehane (both also, not entirely coincidentally, former Wire writers: Pelecanos actually got Price involved in the show) owe him a debt. Price's novels are few and far between, just eight stretching across a thirty-five-plus year career, mostly dwelling on the underbelly of urban America, the best known of which probably those that were turned into films – Clockers (1992) and Freedomland (1998). In August this year Price signed a deal with Henry Holt to write a series of straight-up detective novels under a pen name, Jay Morris. I read an article at the time to the effect that Price got so sick of slaving and sweating over worthy and difficult-to-write (but not to read) books that he figured he might as well try something a bit easier instead (and maybe make some crazy bank in the process). And why the hell not.

I have a first edition of his debut novel, The Wanderers (1974), sitting on my shelf waiting to be read, but the fact that I haven't yet read anything by him didn't stop me from snapping up this copy of Samaritan when I came across it hiding on one of the stalls in the Lewes Antique Centre, not least because it was only a quid. The cover design on this one is by former Bloomsbury design director William Webb and it's perfectly fine, as these things go: moody, clean, simple. But it does conform to that image-library/font school of design I was talking about yesterday. Not only that, but its combination of sans-serif typeface and lowering urban scene is also pretty much what you'd expect from a contemporary crime novel cover, although I suspect that may well be intentional. What do I mean by that? Well let's mull that one over, shall we, while we look at the second of today's bargain books: 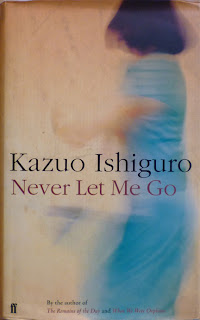 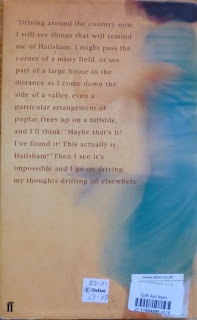 A UK hardback first edition/first impression of Kazuo Ishiguro's Never Let Me Go, published in 2005 by Faber. Now, this isn't the kind of novel I'd normally buy – not that it's any particular kind of novel, as in, it's not, say, a crime novel, or a science fiction novel – rather, it couldn't really be called a genre novel, and as I think we've established by now, it's genre novels – crime, science fiction, etc. – that I tend to go for. Although, having said all that (rather tortuously), Never Let Me Go does actually possess genre elements – in particular SF – concerned, as it is, with clones being bred to act as organ donors. In any case, that aside, Ishiguro is still an author I'm interested in, so when I saw this in the Lewes branch of charity shop Oxfam for less than three quid – ooh, look: I've left the price sticker on the back – I grabbed it, sharpish like.

The cover design here is by London firm Two Associates, and as with the Richard Price book and the way its cover resembles those adorning other contemporary crime novels, the cover of Never Let Me Go is very much what we expect a literary novel to look like. Which is to say, it conforms to our current expectations – formed by countless other books and indeed films, film posters, adverts, and so on – of what a literary novel should look like: a blurry image, an elegant font. And like the Price novel, it almost certainly plays to those expectations. After all, one of the purposes of a book cover is to be attractive to, and therefore to attract, the sort of person who might be interested in that book; to get you, the book-buyer, to pick up and buy that book. So in that sense, playing to the gallery is perfectly understandable: Samaritan looks like a crime novel – looks like novels by the aforementioned Pelecanos, Lehane, and even, say, Ian Rankin, and consequently might well attract anyone interested in crime novels or the works of messers Pelecanos et al; and the Ishiguro conforms to the stereotype of what a so-called literary novel should look like, right down to the faux staining and distressing (this isn't a notably scruffy copy; those scuffs and marks you can see on the jacket are a design choice), and would therefore quite conceivably attract a bookworm of a literary bent. 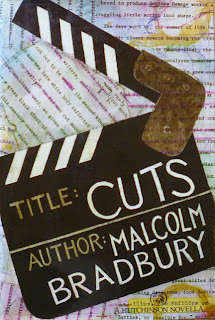 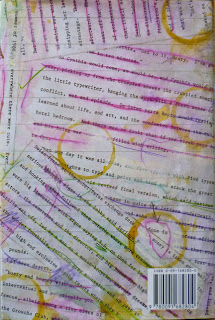 This is a UK hardback first edition of Cuts by Malcolm Bradbury, published by Hutchinson in 1987. Bradbury is one of those authors who seems to have been with me all my life and yet whose novels I've never read a one of (there's a theme developing here...). I think my mum might have had a copy of The History Man – his best known book – at one point, and I distinctly recall seeing his works in Beckenham library when I used to haunt those unhallowed halls in the '70s and '80s. He was an academic as well as a novelist, an authority on modern fiction, penning books on Evelyn Waugh and E. M. Forster. Cuts is a novella rather than a longer work, and is particularly pertinent at the moment, as it's about budgetary cutbacks, specifically those at a provincial university.

I bought it in the Lewes Flea Market, which isn't usually a terribly rewarding venue books-wise, mostly housing shonky book club editions in amongst its random selection of furniture and knick-knacks. Cuts stood out by dint of its distinctive jacket; the cover painting – and therefore the dustjacket, as the painting virtually is the jacket, and vice versa – is by Tom Phillips, a very well known artist and Royal Academician, so it's necessarily a different kind of jacket to the previous two books. On top of that, it dates from an era before Quark XPress and InDesign and Photoshop and online image libraries and indeed computers being used in the design process at all, really. Which seems strange, I know, but once upon a time that's how things were: when I was on my art foundation course at Ravensboune in 1988, the design students were still focused on quaint things like pens, paper and rulers. Computers just didn't figure in the equation.

So can we make a meaningful comparison between the cover of Cuts and the covers of Never Let Me Go and Samaritan? Of course we bally well can. Technology and methodology march on, but cover design is still cover design. And on a purely window-dressing level, it has to be said that the Price and the Ishiguro are rather prettier than the Bradbury, which is notably awkward, even ugly in comparison. But that is, I'd propose, the only category they do categorically triumph in.

Aesthetically, there's a lot more going on in the Bradbury, which is a cavalcade of textures and colours and types of type and angles and planes and just areas of interest. Furthermore, as we've established, to a greater or lesser degree the Price and the Ishiguro pander to and play to the stereotypical cover expectations befitting their particular sought-after audience. That's potentially an effective marketing device, but it's also a very boring one. The Bradbury, on the other hand, isn't trying to be like anything else (although it does perhaps owe a debt to, for example, Kurt Schwitters), and as a result seems so much fresher than the other two, despite having a good number of years on them. It also does a better job of reflecting the thing that's the most important thing of all: the words inside the book (almost too literally, one might argue). That clapperboard on the cover, for instance, is a direct reference to an element of the plot of Cuts, concerning the editing of a television programme. That, to me, says more about the novel than a photo of a city says about Samaritan or another, blurrier photo of a girl says about Never Let Me Go. (Although, as I say, I haven't read any of these books yet. I could, as ever, and as is often the case, be wrong.)

Of course, there's room for subtlety and suggestion on a book cover, although less so these days. But there's really nothing subtle about conforming to stereotypes or playing to them either. So which of these covers is the better? Honestly, I'm not really sure. I don't actively dislike any of them, and they could all be said to be valiant efforts, one way or another, at getting people to recognise and hopefully buy each book. But I do kind of wish there were a few more book covers being created these days that were as willfully individual as that Cuts dustjacket. There is, after all, more to life than InDesign and image libraries.
Posted by Nick Jones (Louis XIV, the Sun King) at 02:22