There's no rhyme nor reason to this week's posts (one could make a similar case for most weeks' posts...); I'm still trying to catch up on the backlog of books that's been building up, so, much like yesterday and the day before, the next few days will essentially consist of a random series of posts on whatever takes my fancy. And today, we have two books, starting with this: 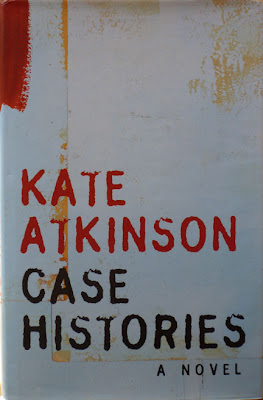 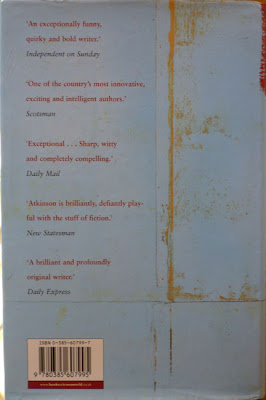 A UK hardback first edition/first impression of Kate Atkinson's Case Histories, published by Doubleday in 2004, with an intriguingly abstract dustjacket illustration by Michelle Thompson. I've only just started reading it, and am enjoying it thus far (character and digression seem to be watchwords), but I've never read any other of Atkinson's books. So why, if I'm not familiar with her oeuvre, did I track down a first edition of this particular novel, I hear you cry? Excellent question. Well, as I say, I'd never read any of Atkinson's work, but I saw her new book, Started Early, Took My Dog, was out (published by Doubleday), and getting good notices. And of course Started Early is the fourth of Atkinson's novels to feature private investigator Jackson Brodie, and I couldn't very well buy the fourth book in a series without at least getting the first book in the series, now could I? I mean, that would be sheer madness.

So I bought Started Early, Took My Dog, ostensibly so Rachel (a.k.a. The Bird) could read it, as she's read a couple of the other Brodie books, and I found an inexpensive first edition of Case Histories so that I could start reading the series too. But I'm not very far into it yet, and I get the feeling Atkinson deserves more than my customary one-line largely-sight-unseen plot summary (Book Glutton, I know you're an Atkinson fan, so feel free to enlighten/elaborate in the comments). So... yeah. Really, this post is even more pointless than usual.

Ah, but of course I do have a point to make (there's a shock) and that's concerning the cover design on Started Early, Took My Dog. Now, as a rule, I'm not overly keen on contemporary cover design, at least not that which graces (disgraces?) novel dustjackets. The form for designers seems to be: find a nice font; alight on a vaguely relevant/failing-that-moody image of a person/house/if-all-else-fails-tree from an image library (which can lead to amusing duplication; The Rap Sheet has lots of examples of the same pics popping up on different covers); bung on a texture; job done. (The jacket for Case Histories is all about that unusual illustration, although I guess it at least displays a mind at work in the picking of that illo.) Truly distinctive or memorable jackets are few and far between, and cases are an afterthought, if that.

I'll hopefully be returning to this subject tomorrow (what was that about there being no rhyme or reason to this week's posts? Yeah, I might've lied there; there's always a plan, no matter how half-arsed), but there's usually an exception to every rule, however rambling that rule may be, and the UK hardback of Started Early, Took My Dog is such an exception: 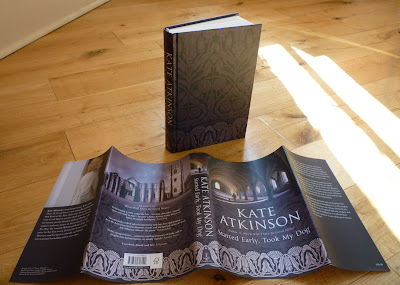 That's a lovely piece of cover design, one of the best I've seen this year. What I like about it is there's evidently a lot of thought gone into it, not least because there are so many names listed on the jacket back flap it almost reads like the closing credits of a movie, or maybe a particularly elaborate band intro. We've got Tracey Paterson credited for the front cover image; Mauritius/Alamy credited for the back cover image (those pesky image libraries are never far away...); Petra Borner/Dutch Uncle on the patterns; and Claire Ward/TW on overall design (and John Bonham on the drums – good evening Norwich, we are here to rock you).

But let's not get too glib (...), because the end result is definitely worth the many cooks that brewed this particular broth. There's a great balance to the jacket, and a nice link between the jacket and the case, with that purple colour and Petra Borner's patterning present on both. The picture on the front continues to intrigue me; I think it's a painting, but I'm not completely certain, and I'm struggling to find anything on Tracey Paterson beyond this list of artists (if that even is her). In any case, the choice of the photo of the abbey on the back is a nice counterpoint to Tracey's front cover image, which I guess is down to Claire Ward, who I believe is creative director at Transworld, Doubleday's parent publisher. 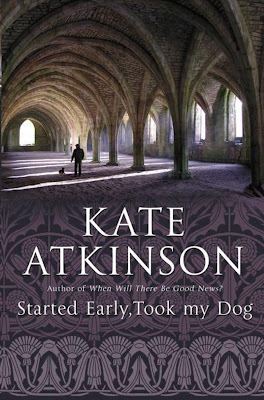 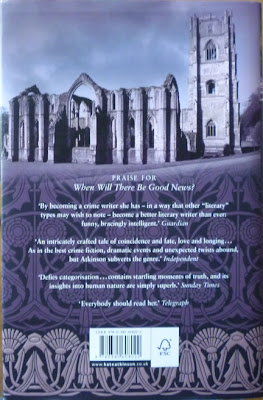 There's clearly a lot of care and attention gone into the book as an object, something you hold in your hands, something tactile, something you'll want to keep and look after. The detailing extends to a subtle bit of embossing on the author's name on the front of the jacket, and even to the endpapers, where there's a nice stone effect instead of the standard flat colour: 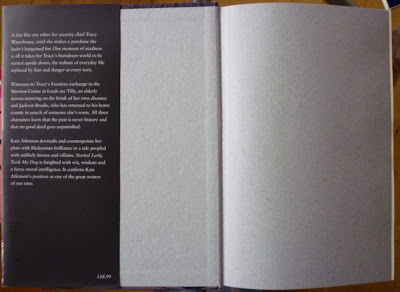 It's a good example of how book design can still be beautiful and interesting, even in this age of InDesign, Photoshop, image libraries and all the rest. And the publisher has even seen fit to extend the design across Atkinson's backlist, repackaging the whole line: