I've still got a couple of recently bought Book Bargains to blog about, both of which, as the title of this first of two posts suggests, were bought in Lewes, the East Sussex town in which I oh you know the drill. So let's see if we can't get 'em squared away by the end of the week. And look! Here's one now: 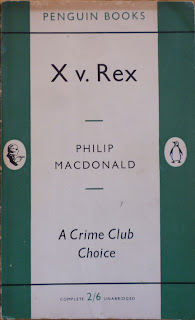 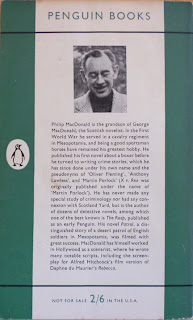 A 1955 first Penguin paperback edition of X v. Rex by Philp Macdonald. I found this in the cheapo paperback dump bins outside second hand bookshop A & Y Cumming up Lewes High Street (the Bow Windows Bookshop has similar dump bins, as do a few other Lewes book emporiums). Really, I just liked the sound of the story: a policeman is killed in a country town near London, and then another, and another, until panic spreads and the government becomes involved (the "X" of the title is the killer; not sure who "Rex" is though... Rex Stout? Rex Harrison? T.Rex? Rex-N-Effect?). In fact, according to the ever-reliable (ahem) Wikipedia, it's a very early example of a serial killer novel, before the term 'serial killer' had even been invented.

X v. Rex has a somewhat convoluted publishing history; I think it was originally published by Collins in 1933, under the pseudonym Martin Porlock. It then gained the title The Mystery of Mr. X for a Literary Press printing, possibly around 1934, again under the Porlock pseudonym, before finally being published once again as X v. Rex under Philip Macdonald's own name in this Penguin edition. To add to the confusion, it was also published as The Mystery of the Dead Police, again under Macdonald's own name, certainly by Dell in the US in 1955, possibly by Collins in the UK earlier. What I do know for sure is that Macdonald largely wrote whodunnits or locked room mysteries, which makes X v. Rex even more unusual. Leafing through it outside the shop, though, two things grabbed me more than the serial killer angle: the political intrigue, with the Prime Minister growing increasingly alarmed at the situation with the murdered policemen; and that the descriptive prose is intermingled with diary entries by the killer himself.

This edition of X v. Rex was one of ten books issued as a Penguin paperback to celebrate the twenty-fifth anniversary of Collins' famed Crime Club, along with the likes of Agatha Christie's Murder in Mesopotamia and Nicholas Blake's A Question of Proof; all ten books were published on the same day in 1955. Which is quite a neat little idea, and just goes to show that even back then publishers weren't above the odd publicity stunt...
Posted by Nick Jones (Louis XIV, the Sun King) at 04:12