Something a little different for this second instalment of Notes from the Small Press – which, if you've just joined us, is, or at least is intended to become, a series of posts about small press comics; first instalment here (and indeed third instalment here). Usually on this blog I babble on about stuff and either show book covers or comic book covers or a few sample pages to illustrate whatever point I'm trying (and often failing) to make. Today, however, I'm reproducing an entire comics story. 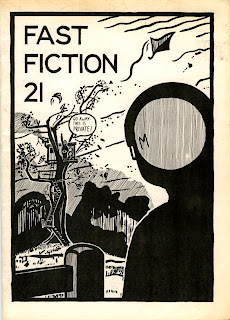 The story is called Monitor's Human Reward, written and drawn by Chris Reynolds, and it is quite simply my favourite short comics story, ever. I first read it in the December 1986 issue of Fast Fiction, the small press anthology I wrote about in the previous Notes from the Small Press (I think it also made an appearance in Paul Gravett's brilliant Escape magazine, and it may well have been in Reynolds' own Mauretania series too). Something about it really connected with me; I knew nothing about the title character, Monitor – for some reason he wore a helmet with his initial on the side of it, but other than that he was unremarkable. In fact I still know virtually nothing about Monitor, who has featured in many of Chris' comics over the years, and in a way that only enhances the effectiveness of this story. It's a part of its mysterious allure; in Monitor's Human Reward, what's unsaid is as important, if not more important, than what's plainly stated.

Reynolds was an important part of the 1980s UK Fast Fiction small press scene, publishing his own Mauretania Comics periodical and contributing to many anthologies. His oddly awkward, blocky, somehow cinematic renderings are instantly recognisable, while his stories are a beguiling mixture of the ordinary and the otherworldly – a kind of everyday extraordinariness. There've been a number of collections of the Mauretania material and also Chris' more recent comics, including a 1990 Penguin Mauretania paperback (now available from Chris' website), 2004's The Dial and Other Stories (ditto), and 2005's Adventures from Mauretania (ditto again). There are some brilliant, strange and strangely affecting comics contained in those books, all of which are well worth a look.

I'm still not sure why Monitor's Human Reward left such an impression on me. I think I'm slightly afraid to examine why it means so much to me in case deconstructing it somehow causes it to lose its power, like taking a much-loved mechanical toy apart and then not being able to make it work again. But I recognise the emotions it evokes: an unspecified longing; a sense of not knowing what it is you want until it's right in front of you; how it feels to arrive home. I like the way it's as if the story is being made up as it goes along, and you can see that happening; I don't know if that's how it was created, but it could have been, and that makes it more real, because in real life all our stories are being made up as they go along. It lends it a freshness to go with its innate timelessness. It moves in unexpected directions, with little moments along the way that appear to have come as as much of a surprise to the tale's creator as they do to us. Like the scene where Monitor reads the letter on the doorstep and discovers... well. You'll just have to read the story yourself.

Monitor's Human Reward is presented here exactly as I originally read it, scanned from my copy of Fast Fiction #21 – click on each image to see a larger version. A huge thank you to Chris Reynolds for granting permission to republish it; please go visit his website, take a gander at the Mauretania links and his wonderful paintings (I'd definitely recommend clicking on the 'more paintings' link; some of Chris' landscapes are fantastic), and perhaps buy some stuff. And enjoy the story. 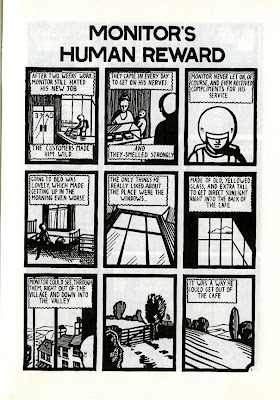 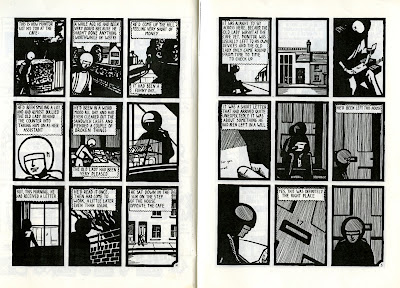 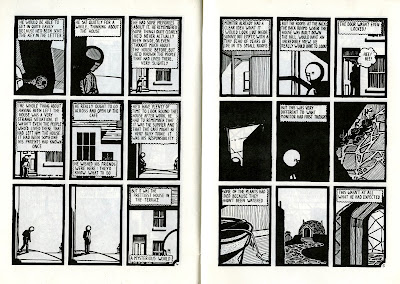 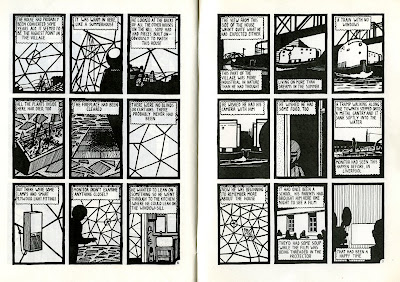 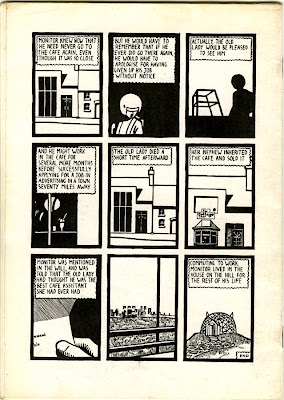