Westlake Score: What's the Worst That Could Happen? by Donald E. Westlake

It's Wednesday, which means we're now halfway through Westlake Week Mark II. And what better way to celebrate than with yet another Westlake Score: 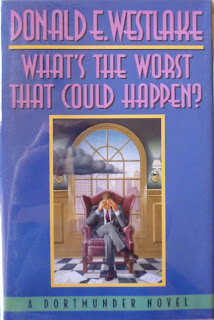 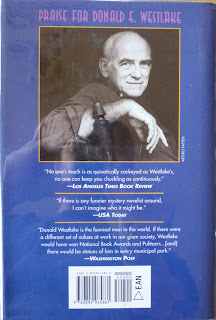 This, folks, is the US hardback first edition/first printing of Donald E. Westlake's What's the Worst That Could Happen?, published by Mysterious Press in 1996, with a dustjacket illustration by Jeff Fitz Maurice and jacket design Jackie Merri Meyer. It's the ninth Westlake novel to feature hard luck career criminal John Dortmunder, following 1993's Don't Ask. This particular copy came from the same dealer I got my copy of the last-Dortmunder-but-one, Drowned Hopes (1990), and like that book it again comes from the collection of A-Team producer Frank Lupo. But it hasn't only passed through Mr. Lupo's hands. Oh no. It's also passed through Mr. Westlake's hands. Regardez-vous: 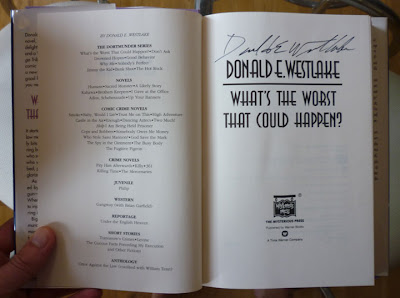 Like the copy of Don't Ask I showcased yesterday, this copy of What's the Worst That Could Happen? is also signed, although not dedicated in this instance. But it does mean I now have five books bearing Westlake's John Hancock, so now's probably a good juncture for me to post some ill-informed thoughts on Westlake's autograph, n'est ce pas?
Posted by Nick Jones (Louis XIV, the Sun King) at 07:46