What's this? Blogging on a Saturday? This is unheard of! Whatever is the world coming to?

Well, I figured I'd round off Westlake Week Mark II with one last Donald E. Westlake Score, in the shape of this: 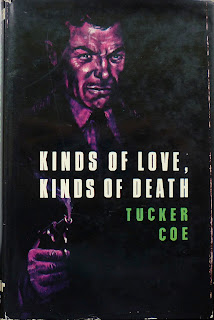 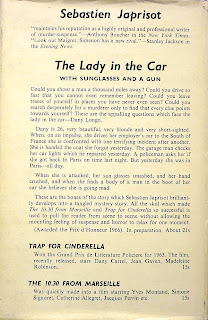 It's a UK hardback first edition of the first of Westlake's series of five novels written under the pseudonym Tucker Coe, Kinds of Love, Kinds of Death, published by Souvenir Press in 1967 (originally published in the States by Random House in 1966). All five of the Coe novels star disgraced ex-cop Mitchell Tobin, and are more serious in tone than many of the books Westlake wrote under his own name. The dustjacket on this one is by S. R. Boldero, who illustrated a number of dustjackets for Souvenir Press, including a Modesty Blaise novel, as well as loads of paperback cover for Pan, Arrow, and more besides. As ever, the redoubtable Steve Holland has the most comprehensive guide to Boldero's work at his Bear Alley blog.

I had to go all the way to Australia for this one. Not literally, obviously: I mean I bought it off a dealer in Australia; the only copy listed for sale in the UK should have been de-listed, as it sold a while ago. No matter though; even with the postage it was still pretty inexpensive, and it's a nice addition to the collection.