And we return to Westlake Week Mark II after those short messages, with this: 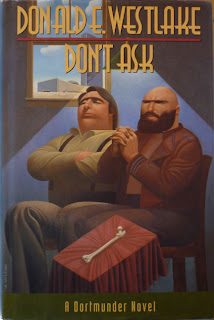 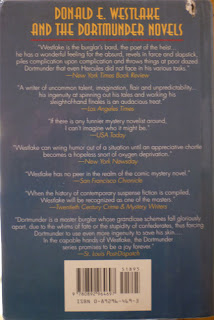 A US hardback first edition/first printing of Donald E. Westlake's Don't Ask, published by Mysterious Press in 1993, with a slightly ugly dustjacket illustration by Wilson McLean and jacket design by Jackie Merri Meyer. This is the eighth of Westlake's Dortmunder novels, following 1990's Drowned Hopes, and as with that book I had to go for an American first edition here, as there was no British hardback edition, or indeed any British edition at all until the 2008 Quercus paperback. There are plenty of copies of Don't Ask for sale online – at least from the States – but it's a bit of a minefield. Many of those are print-on-demand editions, so finding a proper first printing was kind of tricky, with a few blind alleys along the way. I got there in the end though, and for not much more than a fiver (excluding shipping from the US, so more like fifteen quid in all). Which is all the more remarkable when you consider this: 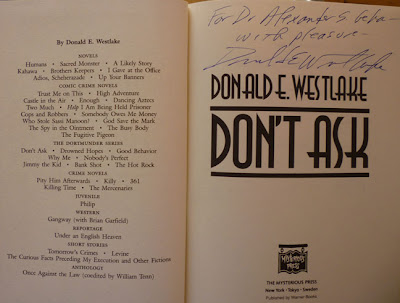 Yep, it's signed, and dedicated too. A lot of book collectors really don't like dedications, much preferring a simple signature, but I rather like them. They're a bit more personal than a straight signature, and they're less likely to be forgeries too. And it's kind of nice to know a book you own has at one point been in the hands of the author him- or herself, signed and dedicated in person to a fan of that author's work, and then no doubt treasured by said fan... right up until the point it's flogged to an uncaring, money-grubbing, heartless dealer. (Dealers: I josh. Possibly.) But then it finds its way into my hands, and ends up being treasured all over again, not to mention written about at tedious length on a tiresome blog. So thank you for selling it, Dr. Alexander Whatever-the-hell-your-surname-is. Your loss is my and my dwindling readership's, er, gain.
Posted by Nick Jones (Louis XIV, the Sun King) at 12:36