Sign Your Name Across My Book: Those Donald E. Westlake and Richard Stark Signed Editions in Full

There's an awful lot of discussion, debate and argument about eBooks at the moment, which are variously described as a publishing revolution or the end of publishing as we know it (or indeed both). It's still too early to determine what they mean for publishing in general and book collecting in particular (although I doubt that'll stop me posting something really boring on the subject in the near future), but it strikes me there's one thing an eBook will be able never replace, and that's a signed copy of a book.

Lots of people love signed books. Book signings by popular authors can see queues stretch out the door and round the block, while signed copies of books often fetch a premium online. But for a lot of book collectors, signed editions can be a mixed blessing. For one thing, as with all autographed memorabilia, there's the question of authenticity: if you haven't had a book signed for you in person, what guarantee do you have that the signature isn't a fake? Then there's the issue of dedications: the fact that a book's been dedicated to a particular person can be offputting for some collectors (although not for me) – unless, of course, it's dedicated to another author, say. And then there are those collectors who would simply rather have their books as pristine as possible, with nothing, not even the author's own script, sullying the condition.

Personally, I'm more interested in whether a book is a genuine first edition rather than whether it's signed or not. An author signature on a book is a nice bonus for me, but if it's an author signature on a second – or later – impression of a first edition, or even – heaven forfend – a second edition, I wouldn't want the book in the first place, signature or no. But every now and then, in my ridiculous clambers across the irresistible but dangerous face of the internet for first editions by particular authors, I end up with a signed book into the bargain, usually because it's no more expensive to buy a signed edition than an unsigned one. And so it is with Donald E. Westlake.

As I mentioned in the previous post, I've got five signed Westlake novels now, four of which were bought online. I guess it's entirely feasible that all of these autographs are fake (although the one book I bought in a shop does have a "Signed by the author" sticker on it, so that's a bit more certain), but I don't think they are, for these reason:

1) Not to be unkind, but in the grand scheme of things, i.e. the wider world outside the Westlake-obsessed nexus this blog intersects with, the name Donald E. Westlake isn't that big a deal. There's a cult following for the Richard Stark books, sure, and to a lesser degree for other Westlake works, but Westlake isn't, and never was, a huge best-seller. Therefore, any forgers aren't gonna make much money off his signature. Related to this point is:

2) Westlake signed a hell of a lot of books in his time. A cursory search on AbeBooks will show that Westlake-signed books aren't exactly thin on the ground, and he was well known for doing store signings. With so many signed editions out there, particularly Westlake books that aren't that valuable or scarce anyway, there's little point in faking up a signature.

3) Three of the five signed editions I own are also dedicated. As I reasoned in this post, if you're going to go to the trouble of faking a signature in order to add value to a book, it's unlikely you'd fake a dedication too, as that will often as not put off any potential buyer. And finally:

4) If you look at the signatures themselves, they're either the work of a highly skilled forger with access to a variety of different Westlake signatures upon which to base his or her brilliant facsimiles, or, much more likely, the work of the same bloke, i.e., Don. So let's have a look at 'em, shall we?

Now, I'm going to show these in order of book publication, but of course that's no guarantee that that's the same order in which the books were signed. I can be certain that Bad News is the most recent signature, as that book – the Robert Hale edition anyway – was only published in 2002, but there's no way of knowing for sure when any of the others were signed. However, I think we can make a few assumptions, starting with: 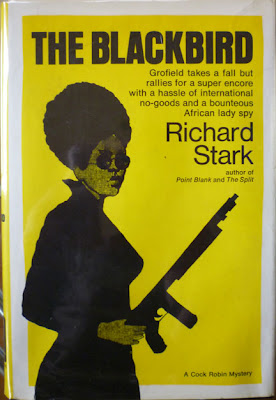 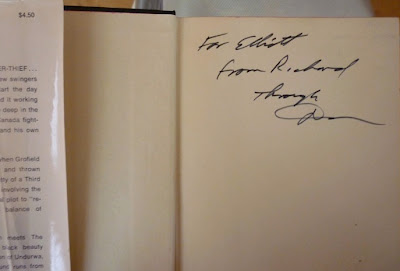 This is the US first edition of the Richard Stark novel The Blackbird, published in 1969. Note that Westlake has signed (and dedicated) this as Stark ("through DW"), which would lead one to suspect it was signed around its initial publication, as at that point Westlake hadn't been outed as Stark (I think that happened in the early 1970s, prior to 1974's Jimmy the Kid). All supposition of course, but it kinda makes sense. Of all the signatures I'll be showing, this is possibly the most disputable, as it's trickier to compare a Stark signature to a Westlake signature than it is a Westlake one to a Westlake one. But even so, if you compare, say, the "For" at the start of the inscription to the "For" in the inscription in Don't Ask (see next book but one), I think you can ascertain it's the same man.

Next, we have this: 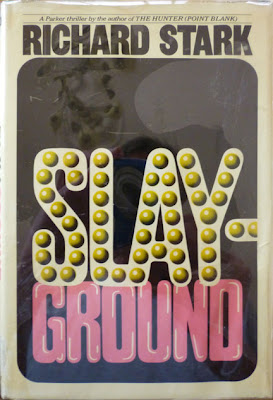 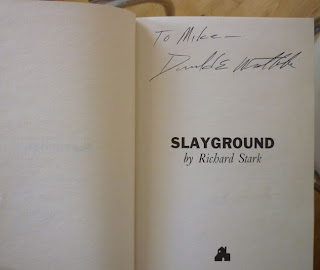 This dedication is in my 1971 US first edition of the Stark novel Slayground, but in this case, the book is signed using Westlake's real name, which leads me to suspect it was signed some time after publication. I could be wrong, but it makes sense. This inscription is written with a biro rather than the marker used for The Blackbird, and of course Westlake's signed his own name rather than Stark's, so it's not straightforward comparing it with the Blackbird one, but if you look at the way the letters lean and join (or not, as the case may be), it's fairly evident they're from the same hand. But as I say, it's actually more instructive comparing the Blackbird inscription with our next one: 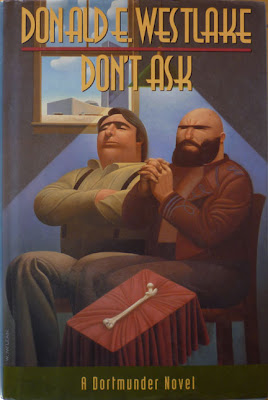 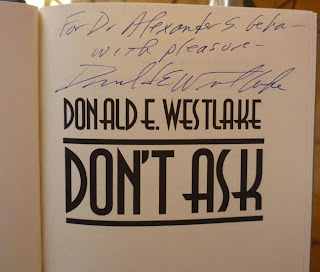 This, as evidenced by the title, is in my 1993 first edition of Don't Ask. I think from this point on it's fairly safe to assume the signatures date from around the time of publication; that's the most likely time for a book to be signed, when an author is doing the rounds as part of their publicity and promotional chores. As already mentioned, you can compare aspects of this dedication with the one in The Blackbird, but you can also compare Westlake's name with his name in Slayground: this signature is slightly looser that one, but it's the same middle "E", the same elongated stroke off the "W"... The same man, in other words. I quite like this dedication too; that "with pleasure" suggests Westlake was somehow impressed by the good doctor.

Our final two examples are both straight signatures, so let's look at them together: 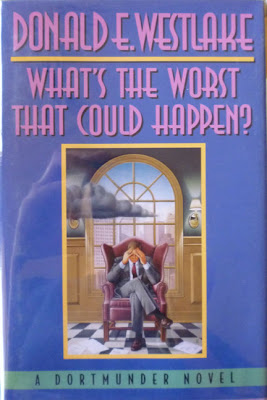 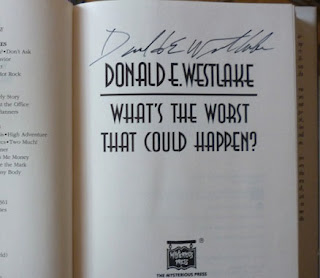 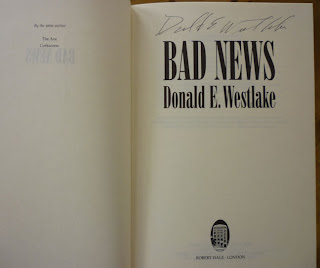 That's my 1996 first of What's the Worst That Could Happen? up top and my 2002 first of Bad News underneath. The only thing really to note here – and you'll have to click on the picture to see this properly – is the way Westlake has actually joined the "D" in his first name to the "o" in the Bad News signature. He doesn't seem to have done that in any of the other signatures I own. Are there any conclusions we can draw from this? Er, well, no, not really... unless... unless that means the Bad News signature is a fake?! But look! It's got an official sticker on the cover and everything! 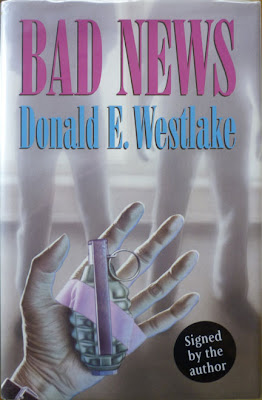 Aaaand I think that's quite enough of that, don't you?
Posted by Nick Jones (Louis XIV, the Sun King) at 13:11