Westlake Score: Watch Your Back! by Donald E. Westlake

Even I'm getting slightly bored of these Dortmunder new arrivals now, so you'll be glad to know this is the last one I have to show (for a while anyway). And we're back to the US first editions with this one, after our brief sojourn with the UK Robert Hale editions of Bad News and The Road to Ruin: 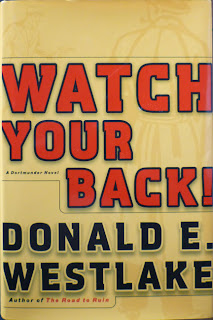 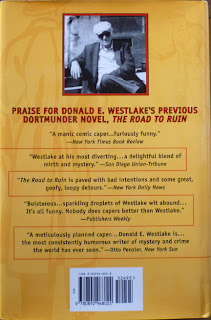 It's a US hardback first edition/printing of Westlake's Watch Your Back!, published by Mysterious Press in 2005, with a rather bold dustjacket designed by Bradford Foltz. This is the twelfth novel to feature John Dortmunder and crew, and its arrival means I now have numbers one to twelve of the series, with only the final two, What's So Funny? (2007) and Get Real (2009), still to get. No rush for those though; I have, after all, ten Dortmunder books to read before I get to those.

Traditionally, at this point I'd post a first edition cover gallery of Dortmunder novels, to follow on from this one last month. But to be honest, you've already seen most of the covers that would be in said gallery earlier this week (Good Behaviour and US editions of Bad News and The Road to Ruin excepted), so it'd be a bit of a waste of everyone's time. Maybe I can do something else instead though. I'll have a ponder.
Posted by Nick Jones (Louis XIV, the Sun King) at 09:41