Bought at Brighton Marina: The Old Devils by Kingsley Amis

The afternoon that I was discharged from hospital the second time – I'd returned to the Royal Sussex for a day of tests to check on my wellbeing, following the events of That Night and its consequent, longer hospital stay – we stopped at Brighton Marina on the way home to grab something to eat (I'd been on 'nil by mouth' since the preceding evening). We were walking past the RNLI hut when I noticed a box of books for sale – or rather for the price of a donation – outside it. Of course I had to have a quick rummage, and I came up with this: 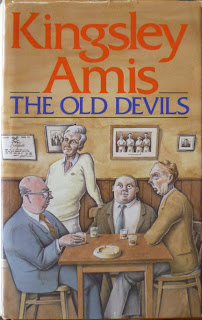 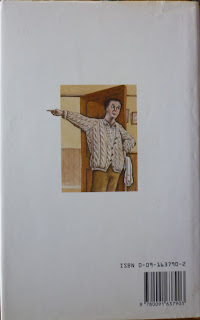 A 1986 UK Hutchinson first edition hardback of Kingsley Amis's The Old Devils. This is one of those books you tend to see everywhere, although almost invariably what you'll see are book club editions or reprints of the hardback. Which is what I figured this copy was, until I check the front flap – price present and correct – and examined the indicia, where there was no trace of the dreaded words "reprinted twice". So it's a true first edition/impression, and therefore a small result. A glance on AbeBooks confirms there are a fair few firsts available online, but you'd have to negotiate the inexpert knowledge of many so-called booksellers in order to get hold of a true first – i.e. not a reprint – and who can be fagged with that? Well, I can sometimes – and I'll be blogging about a couple of cases soon – but not in this instance. There are just too many copies out there, and evidently it's just too much to ask of some booksellers to, y'know, check if there's a price on the front flap or if it says "reprinted" in the indicia.

As for the reason there are so many reprints of the hardback of The Old Devils, famously it won the 1986 Booker Prize for Amis. At the time it was kind of assumed he was awarded the prize not so much because The Old Devils was particularly great but because it was widely accepted Amis was well past his best and if he didn't win the Booker soon he'd be dead anyway. But as this Guardian Book Blog post reasons, it's more likely The Old Devils won that year because it was a better book than any other on the shortlist – a list which included Margaret Atwood's The Handmaid's Tale and Kazuo Ishiguro's An Artist of the Floating World.

In fact, as anyone who's read further into Amis's body of work than Lucky Jim can attest, contemporaneously Amis was a better writer than almost anyone you care to name, his mid- to later novels included, so it's nice that opinion is finally catching up with fact. I for one am certainly looking forward to reading this one. The illustration on the front cover, by the way, is by Alastair Taylor, who I think is this Alastair Taylor.
Posted by Nick Jones (Louis XIV, the Sun King) at 07:01