So, with the addition of The Rare Coin Score, I'm pretty much able to draw a line under my collection of the UK Allison & Busby editions of Donald 'Richard Stark' Westlake's Parker novels. As I mentioned in that previous post, I've got all eight of the original A&B editions (which were published out of sequence) from the mid-'80s: 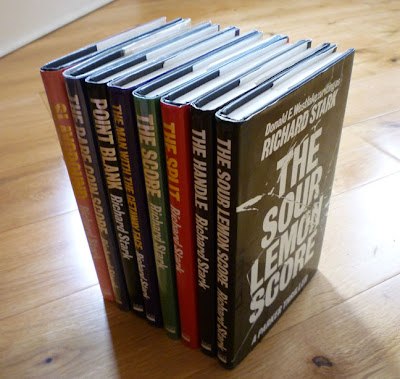 and all I'm missing from the later waves of A&B editions are a couple of hardbacks where all I currently have are paperbacks. I'm not about to go out of my way to get those though; if I see 'em cheap at any point I'll pick them up, but otherwise the paperbacks I have will suffice. This, then (drum roll, please), is my Richard Stark Allison & Busby Parker Collection, in Parker series order (not A&B publication order, which was all over the shop, although I have included A&B pub dates in brackets): 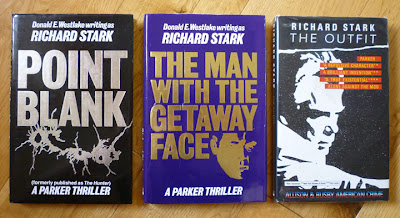 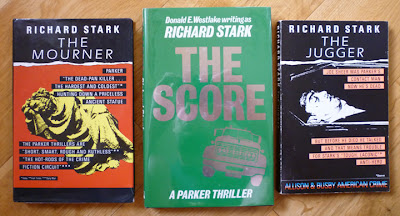 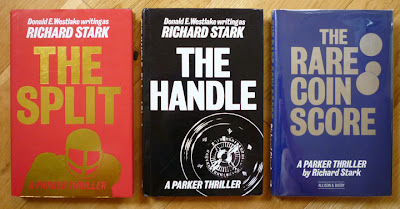 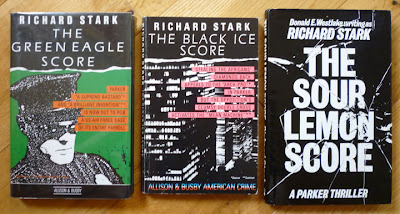 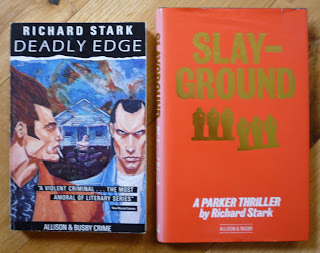 And that's it as far as Allison & Busby went; far as I can work out, they never published the other two Parker novels in the original run – Plunder Squad and Butcher's Moon – and only issued Deadly Edge in a paperback, not a hardcover. Incidentally, I was chatting with the proprietor of one of the bookshops I visited during my tour of London bookshops, and when I mentioned I'd found an Allison & Busby edition of The Rare Coin Score earlier that day, he made a remark to the effect that he considered A&B a bit of a cowboy outfit, with awful paper stock and production values. That's certainly born out by some of the copies I own, where browning paper is evident – not to mention the dreadful proofing on the A&B Parkers (they're littered with errors that aren't in other editions). A little second hand bookseller gossip there. Still, nice to have hardbacks of most of the Parkers.
Posted by Nick Jones (Louis XIV, the Sun King) at 12:05