Right then. As I've been promising for a week now, it's time to get cracking on the various Donald Westlake/Richard Stark books I've managed to bag recently. From here on out (for a wee while at least) it's Westlake all the way. I'll be blogging about my various Westlake Scores, interspersed with some equally nerdy galleries and showcases. Most of these posts will probably only be of interest to me, Book Glutton, Olman and maybe Trent, so fair warning to anyone else foolish enough to be reading this blog: it's now officially Westlake Week. Er, except starting on a Wednesday.

And we begin with the first of two scores from the London segment of my recent bookshop splurge:

A UK hardback first edition of Donald E. Westlake's Bad News, published by Robert Hale in 2002 (first published in the US by Mysterious Press in 2001). I bought this in Nigel Williams Rare Books on Cecil Court, which is far and away the most comprehensive shop for modern first editions on that famed street. Like most of the shops on Cecil Court, it's not cheap, but the breadth of their stock, which is housed in the basement (the ground floor is given over to children's books, also a strong selection), has to be seen to be believed. In fact, we can have a look, courtesy of their website: 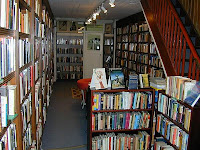 Look at that. That's all fiction, modern firsts the lot. I love poring over their shelves, but I rarely buy anything there. However, I made an exception for this copy of Bad News, which is the tenth of Westlake's novels featuring John Dortmunder and crew. I only have the first four Dortmunders at the moment, so I was skipping ahead slightly by buying Bad News, but in fact getting a decent copy of this Robert Hale edition isn't as easy as you might suppose, even though it's only eight years old. Most, if not all, of the ones for sale online are ex-library, which this copy isn't, and it wasn't expensive either. Plus, it has an added appeal, which that sticker on the cover has almost certainly given the game away on, but I'll come to that a moment.

The jacket painting is by Derek Colligan, who also painted the jackets for the six Stark/Parker novels Hale published in the 2000s (Comeback, Backflash, Flashfire, Firebreak, Breakout, and Nobody Runs Forever). Hale only published one other Dortmunder novel, the subsequent one, The Road to Ruin, but they did, as I say, publish a run of the later Parker novels, plus whatever else Westlake wrote during that period, including The Axe, all with covers by Colligan I believe. Presumabaly Hale simply signed up Westlake's entire output to publish in the UK market under a five-year deal that came to an end in 2005.

As for that added appeal I mentioned... here it is: 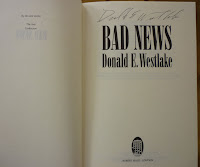 Yup, as the sticker on the cover claimed, it is indeed a signed edition. And don't be surprised if we happen to see that signature again very soon as we work our way through these Westlake Scores... Note that there are only two 'By the same author' titles listed on the half title verso, so this is the third Westlake novel Robert Hale published. Bit mean of Hale not to list some of the other hundred or so books Westlake had written prior to this though...

And while we're on a Dortmunder tip, having now read the second Dortmunder novel, Bank Shot, and liked it a lot more than the first, The Hot Rock (I'll be posting a review at some point), it looks as if I'll be collecting the rest of the books in the series. Which, seeing as I only have first editions of the initial four and now the tenth, and that there are fourteen books in the series altogether, means I've got a fair bit of collecting to do. Here we go again...
Posted by Nick Jones (Louis XIV, the Sun King) at 04:14