And we're back with our regular if slightly pissed off guide to the comics I might be getting this week. Why pissed off? Nothing to do with the comics: Royal Mail have managed to lose a package of mine, somewhere between trying to deliver it and sending it back to the delivery office because it was too big for the letterbox. Which is an impressive feat, even by their standards. Useless bastards.

Dunno if it's my general foul mood or the uninspired nature of the comics themselves, but out of all these so-called 'definites', there's only one that's really that interesting to me, which is Marvel Universe vs. Punisher #1. I'll come back to that, but Red Hood: Lost Days #3 (top left) is Judd Winick's continuing exploration of ex-Robin Jason Todd's movements after he returned from the dead, scratching a Jason Todd fanboy itch that I suspect no one other than me even has, and one I'm not sure I even have. So maybe not quite so 'definite' after all...

Avengers Prime #2 (top right) is, like Red Hood, another miniseries filling in continuity gaps, this time from the end of Marvel's Siege event to the new world order of their current Heroic Age status quo. Essentially, Brian Michael Bendis and Alan Davis have sent the three main Avengers – Steve Rogers, Thor and Iron Man – off to another dimension so they can hit things and bond, thus healing the wounds from their previous relationship woes. Marriage counselling for musclebound he-men, in other words. Do we really need to witness every little character moment from the already-unwieldy massive patchwork quilt that is the Marvel Universe (and, for that matter, the DC Universe)? Bendis clearly believes we do, and since I'll probably be buying it, I evidently do too, even though I kind of... don't. Still, purty artwork from Mr. Davis, no doubt.

Captain America #608 (bottom left) continues Ed Brubaker and Butch Guice's current storyline about Baron Zemo, not a single moment of which I can currently recall. Remind me, these are the 'definite buys', aren't they? Hmm. Well, I have previously loved what Brubaker's done with Cap, so maybe it'll improve soon. Fingers crossed, eh? And finally there's the aforementioned Marvel Universe vs. Punisher, which might be a kind of homage to Garth Ennis' fun Punisher Kills the Marvel Universe, except this time it's Punisher fighting zombified versions of Marvel's characters. I think. But it's written by horror writer Jonathan Maberry, so it could be a good'un.

Ooh, I just had a call from Royal Mail – looks like they found my package. I take it all back.

Meanwhile – and speaking of Garth Ennis – over in the 'Of Some Interest But Probably Not Enough to Buy Them' corner, we have this: 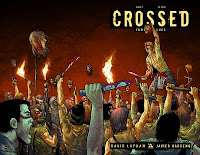 Crossed Family Values #3. I read the first two issues of this, which is David 'Stray Bullets' Lapham's miniseries set in the same world as Ennis' original Crossed series, and it's pretty nasty stuff, even by the standards of Crossed. It's also Just Not Garth: the writing's nowhere near as affecting as Ennis', and it was Ennis' black, bleak take on an end-of-the-world scenario (er, as if an end-of-the-world scenario could be anything but bleak) that made Crossed so compelling. So I might not bother with the rest of it. But, Avatar have announced there'll be a new Crossed ongoing series next year, the first arc of which will be written by Garth. So there's some good news at least.

And finally, we have this:

Amazing Spider-Man #639. When I previewed the previous issue, I figured it might be Marvel Editor-in-Chief Joe Quesada's attempt to put wrong all the things he effed up with that One More Day story. Having now read that last issue, which largely consisted of Peter and MJ talking about their relationship (gah!), I'm not sure that is what's happening... and I'm not sure I can be arsed to read anymore to find out where it's all going. So, it's probably sayonara Spidey for me once more. C'est la vie.
Posted by Nick Jones (Louis XIV, the Sun King) at 12:55