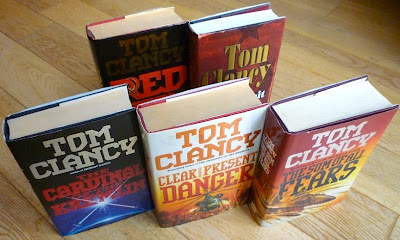 Events, I'm afraid, have rather overtaken me here. I've been promising – myself as much as anyone else – that I'd do a series of blog posts on Tom Clancy for bloody ages, so it was a bugger to learn on Wednesday that he'd gone and died (at the not overly ripe age of sixty-six), thus denying me the opportunity to do so while he was still with us (the swine). Not that Clancy would have cared or even noticed, I'm sure – as, say, Elmore Leonard probably didn't notice anything I wrote about him before he carked it a couple of months back – but even so, it would have been nice, as I managed with Leonard, to post something while he was still alive, given that so few of the authors I blog about are, and also given that I've been reading Clancy for longer than most of them. 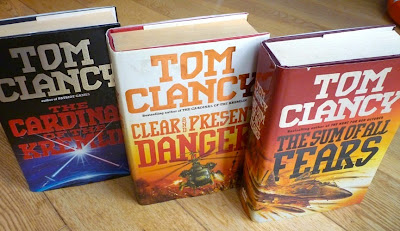 There was a period in the 1990s when it felt like the only fiction I was reading was Clancy's. It was, I think, the movies wot did it. As an admirer of well-crafted action flicks and thrillers, I had a lot of time for two of the three Clancy film adaptations that had been released by the mid-'90s: John McTiernan's The Hunt for Red October (1990) and, especially, Phillip Noyce's Clear and Present Danger (1994). (I was much less keen on Noyce's earlier Patriot Games, which lacked the light and shade of his later effort.) Naturally, those two films led me to the source texts: the Jack Ryan (no relation) series of novels, of which Clancy penned eight instalments proper, plus a bunch of spin-offs starring CIA agent John Clark, his partner Domingo Chavez and, latterly, Ryan's son, Jack Jr.

The Ryan books are mostly great big bricks of things, even in paperback, which was how I originally read them. (More recently I've been picking up UK Collins hardback first editions in Lewes charity shops, with that aforementioned, now likely abandoned, series of Clancy posts in mind; you can see them, with their David Scutt-illustrated dust jackets, scattered about this post; they're more akin to breeze-blocks than bricks.) Even so, I tore through them in the late-1990s and early 2000s, from The Hunt for Red October (1984) to The Bear and the Dragon (2000). (I haven't yet read the 2002 Ryan prequel Red Rabbit, which you can spy lurking in the background in the top photo, again bought in a Lewes charity shop.)

That they became, in one respect, increasingly far-fetched – the machinations necessary to elevate Ryan from CIA analyst (Patriot Games, 1987), to Deputy Director of the agency (Clear and Present Danger, 1989), then National Security Advisor, Vice President (Debt of Honor, 1994) and finally, outrageously, President of the United States (Executive Orders, 1996), left Clancy's authorial strings ever more visible – almost didn't matter: they were efficient, dense but incredibly pacey thrillers, turning on plots – Soviet defections, the war on drugs in South America, conflict between Russia and China – with more than a passing nod to real world tensions (and with an eerie prescience in the case of Debt of Honor), and narratives that were never weighed down by the technobabble Clancy loved to lace his thrillers with. 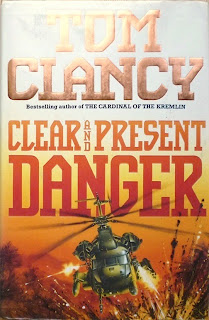 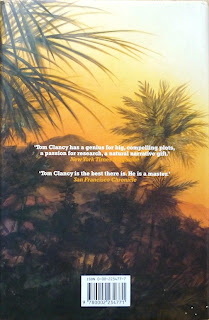 It's for the Ryan novels that Clancy will chiefly be remembered – there's a Kenneth Branagh-directed rebooted Ryan movie on the way which will doubtless help to cement that rep – but for me, Clancy's best book is one of the very few not set in the Ryanverse – his second novel: 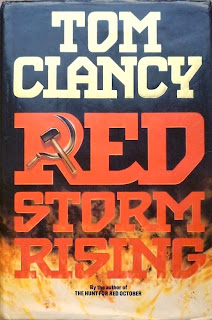 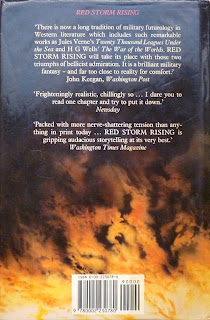 Red Storm Rising, co-written with war gamer Larry Bond and published in the States in 1986 by Putnam's and in the UK the following year by Collins (the edition seen here). A plausible account of a hypothetical shooting war between Russia and NATO over oil reserves, its power resides in its breathless, irresistible sweep, in the way the narrative affords a swooping, God's eye view of the theatre of conflict. The action leaps from locale to locale with brazen abandon: Iceland, the north Atlantic, Europe, West Germany, back and forth, surging from one nerve-shredding military encounter to the next, and with the threat of nuclear escalation ever-present. 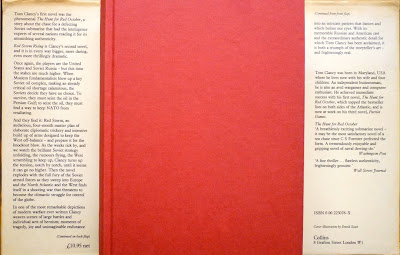 Admittedly the characterisation is tissue thin – the protagonists are little more than cyphers, and years later I struggle to recall a single thing about any of them (whereas I can still just about conjure up the odd bit about Jack Ryan and John Clark and Ding Chavez) – but that's a relatively minor quibble: for sheer scope and scale, the book can't be beat. Certainly it deserves not to be overlooked in the torrent of Clancy eulogies and obituaries that are sure to ensue, which is why I'm commending it (a day early, as is my wont, but also so that this post doesn't appear too far behind the news of Clancy's demise) to this week's edition of Patti Nase Abbott's Friday's Forgotten Books, in order that it should, I hope, escape that eponymous fate.
Posted by Nick Jones (Louis XIV, the Sun King) at 11:00