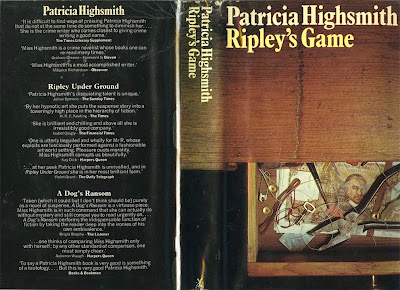 Well, I surprised myself with this one. I sort of figured that if I ever got round to setting up a new permanent page, a la Beautiful British Book Jacket Design of the 1950s and 1960s, it would be focused on one or other of the artists featured in Beautiful Book Jacket Design – Val Biro, say, or Denis McLoughlin; either that, or I'd set up a paperback cover page. Instead, Existential Ennui's second permanent page has ended up being devoted not to an artist or a format, but an author.

In a way, that's rather fitting. I've been collecting Patricia Highsmith in first edition longer than any other writer – longer than Donald Westlake, or Kingsley Amis, or any other of the literary reprobates wot litter Existential Ennui. The 1974 Heinemann first of Ripley's Game at the top of this post was, I think, the first first edition I ever bought – purchased on London's Cecil Court, no less, from a secondhand bookshop the name of which escapes me and which has since vanished anyway – while my inaugural visit to the Lewes Book Fair upon moving down to Lewes in 2008 netted me Heinemann firsts of The Cry of the Owl and The Two Faces of January. Highsmith, then, is in large part responsible for all that's followed – my book collecting habit and consequently this 'ere blog, basically – so it's entirely apt, I feel, and given that I now own first editions of all sixteen of the Highsmith novels initially published in the UK by Heinemann, that she should get her own permanent page:

The gallery can be accessed by clicking the link above, or via the permanent link in Existential Ennui's sidebar, just below the link to Beautiful British Book Jacket Design of the 1950s and 1960s. Note that I've titled it simply a first edition gallery, not a British first edition one, or indeed a Heinemann first edition one (which was what I originally thought of assembling – as a post, not a page – when the notion occurred to me last week). For while the page does currently consist of British editions, and the vast majority of those were published by Heinemann, I reserve the right to add in American – or even foreign – first editions should I come into possession of them – and I certainly reserve the right to include Cresset Press firsts of Strangers on a Train, The Blunderer and The Talented Mr. Ripley, in the unlikely event that I ever find affordable copies of them.

If you're a fan of Highsmith's work, you'll find all manner of stuff to look at – not just jackets and cases but uncorrected proofs and a few intriguing, little seen editions of her novels – but even if you're not a fan, the gallery is interesting as a demonstration of how dust jacket design changed over the course of five decades, from the kind of hand-lettered, illustrated wrappers that were prevalent in the '50s and '60s (and which are also featured on the aforementioned Beautiful British Book Jacket Design page), to photographic and typographic treatments and, finally, back to illustrations again. 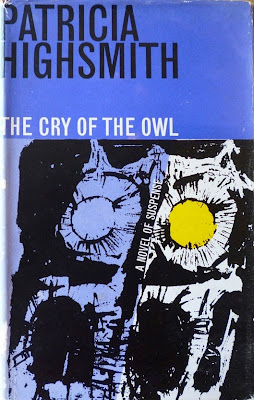 Incidentally, in the course of researching my own Highsmith archive I stumbled upon another Highsmith archive – one I dimly recall having encountered before, actually, but which I don't believe I've ever blogged about: the Patricia Highsmith Papers at the Swiss Literary Archives (part of the Swiss National Library, where a Highsmith exhibition was held in 2006). The site is essentially a catalogue of material that's archived elsewhere – manuscripts and notebooks and scrapbooks and the like, which Highsmith's biographers, Andrew Wilson and Joan Schenkar, must have drawn on heavily – but it's still well worth a rummage, especially Highsmith's photo albums, pages from which can be viewed online.
Posted by Nick Jones (Louis XIV, the Sun King) at 07:50