Compared to the previous two books in this short run of posts on thriller writer Raymond Sawkins, better known under the nom de plume of Colin Forbes, this third and final tome isn't, on the surface, that special. It doesn't, like the copies of Tramp in Armour and A Wreath for America (written under one of Sawkins's other pseudonyms, Richard Raine), boast a signed inscription to his wife, and it dates from much later in his career, when Forbes was writing longer novels that weren't to everyone's taste (although they sold by the bucketload). But it does contain a unique piece of paraphernalia related to the book... 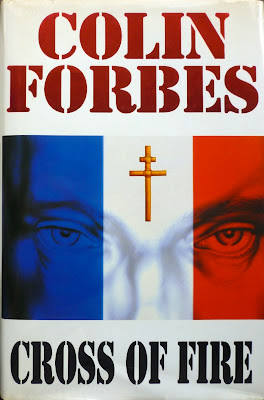 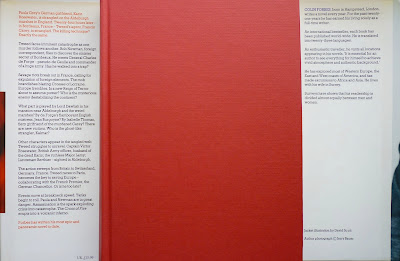 Published in hardback in the UK by Pan in 1992, with a dust jacket illustration by David Scutt (who would go on to illustrate the jackets of Philip Pullman's His Dark Materials trilogy), Cross of Fire is one of Sawkins/Forbes's twenty-four novels featuring Tweed of the British Secret Intelligence Service and his colleagues. It's a beast of a book, clocking in at over 500 pages, and if its Amazon reviews are anything to go by, it's either "dreadful", "dire" or an "excellent thriller" (although the review that last quote was taken from is suspiciously PR-like). However, its relative merits are by the by in this instance, because the really interesting thing about the book is what was secreted inside it: 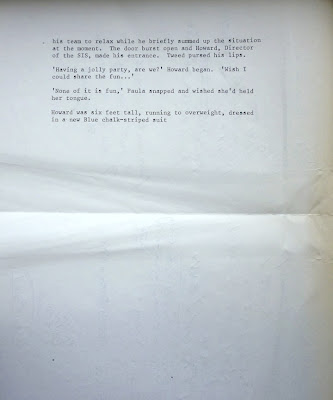 An incomplete typewritten manuscript page. Far as I've been able to establish this is from an early draft of the novel, as the scene doesn't seem to appear in the book itself (although there is a scene that's quite close). Which might lead one to conjecture that perhaps it wasn't written by Forbes at all – that it's an unfinished piece of fan fiction or something. Except for what's on the reverse side: 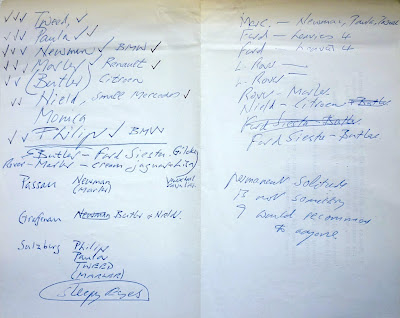 Forbes's handwritten notes for the novel. If you compare the handwriting here (click on the image to enlarge) to that of the inscriptions in A Wreath for America and Tramp in Armour: 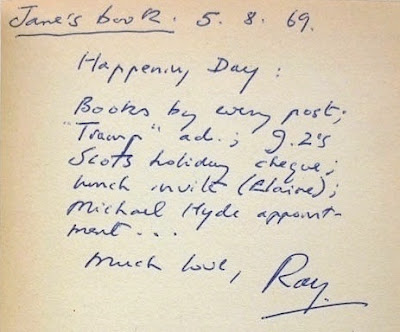 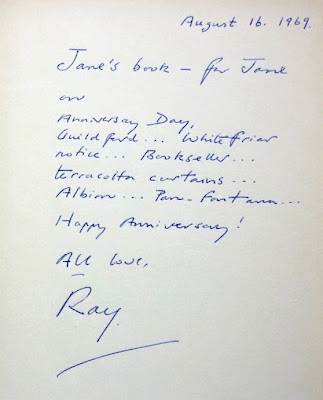 It's does appear to be the same hand, albeit looser, as befits scrawled notes as opposed to a heartfelt inscription. All three of the Forbes books I've showcased came from the same batch acquired by book dealer Jamie Sturgeon – and then acquired from Jamie by me – so it's a fairly safe bet that the manuscript page and notes in Cross of Fire are indeed Forbes's.

Of course, quite what the notes mean is another matter entirely. It looks as if it's mostly a way for Forbes to keep track of who drives what in either the story or a particular scene – BMW, Renault and so forth – but what the ticks next to Tweed and some of the other characters' names signify I've no idea. There's also what may be a scrawled line of dialogue on the right hand side about "permanent solitude", which, when I shared the notes with spy novelist Jeremy Duns on Twitter, prompted Jeremy to recall that according to the late Iwan Morelius – who had a cameo in one Forbes novel – Forbes reportedly never let his wife, Jane, enter his study. (There's an interesting piece by Morelius on his friendship with Forbes over on Mystery*File.) As ever, if anyone has read Cross of Fire and can shed further light on the notes, do please leave a comment or drop me a line via the email address in the right-hand sidebar. 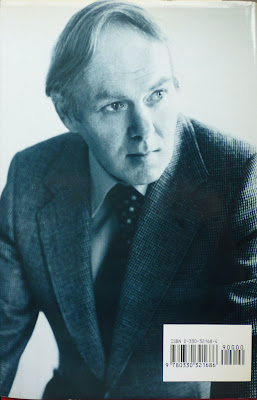 That's yer lot from Colin Forbes for the moment, but seeing as this series of posts on signed books has now veered into the realm of ephemera, let's take a look at an extraordinary letter next, one written by a British thriller novelist – a firm favourite of mine – to another author, on the ins and outs of publishing in the 1980s...
Posted by Nick Jones (Louis XIV, the Sun King) at 05:58