On to the second of three very special books by thriller writer Raymond Sawkins, alias Colin Forbes, all of which I acquired from noted book dealer Jamie Sturgeon. And like yesterday's paperback edition of A Wreath for America – written under one of Forbes's other pseudonyms, Richard Raine – today's book also boasts a highly personal inscription from Sawkins/Forbes to his wife. 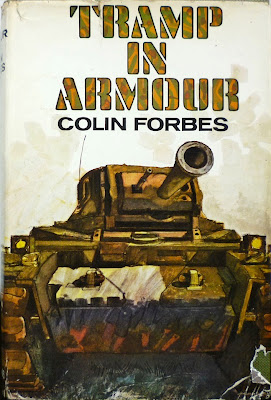 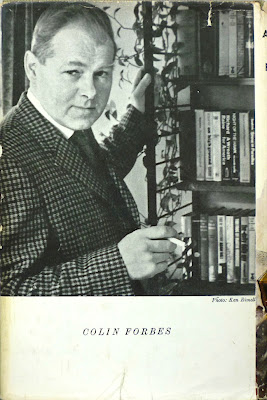 Published in hardback in the UK by Collins in 1969, under a dust jacket designed by Brand 4, Tramp in Armour was Sawkins's first book using the Colin Forbes moniker. (As noted yesterday, Sawkins would later distance himself from his earlier novels, preferring to name Tramp in Armour as his overall debut – although, as spy novelist Jeremy Duns just pointed out to me on Twitter, if you zoom in on the author photo above, you can see some of the other novels he wrote as Sawkins and Richard Raine on his bookshelves – which, Jeremy believes, is how Forbes's fans later discovered he was the author of those works.) It's an action-packed World War II-set tale of a British tank crew who find themselves stranded behind German lines, and is widely regarded as one of Forbes's best novels – Steve Holland at Bear Alley, for example, cites it as one of his favourites, and there's a positive Kirkus review here. 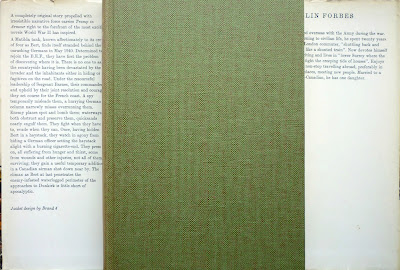 This copy of the Collins first edition is almost certainly one of the advances Sawkins mentioned in the inscription in A Wreath for America, but Sawkins had an additional reason to celebrate around the time the advances arrived, besides the publication of Tramp in Armour, born out by the inscription on the front free endpaper of the book: 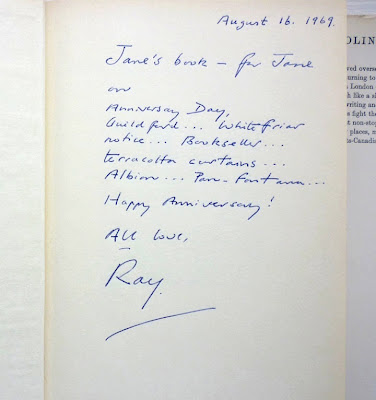 Dated 16 August, 1969 – a week on from the inscription in A Wreath for America – Sawkins begins with "Jane's book – for Jane", then proceeds to list the cryptic events of this "Anniversary Day": "Guildford... Whitefriar notice... Bookseller... terracotta curtains... Albion..." The mention of "Pan-Fontana" is possibly a reference to the paperback rights of Tramp in Armour, which were indeed picked up by Pan, in 1971; thereafter Pan would publish all of the Forbes novels in paperback. Finally, Sawkins signs off with "Happy Anniversary!", confirming that 16 August was his and Jane's wedding anniversary. And as in A Wreath for America, and more understandably given that the Forbes novels were the works Sawkins liked to be known for, he's dedicated the book to his wife too: 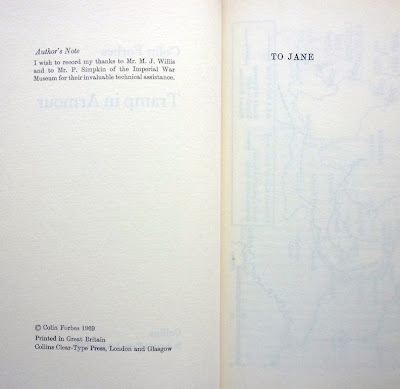 Both this inscription and the one in A Wreath for America offer fleeting but remarkable glimpses into a writer's daily life, but the final Colin Forbes book I'll be showcasing, while not signed or inscribed, contains a piece of paraphernalia which grants an insight into the writing of that particular novel... 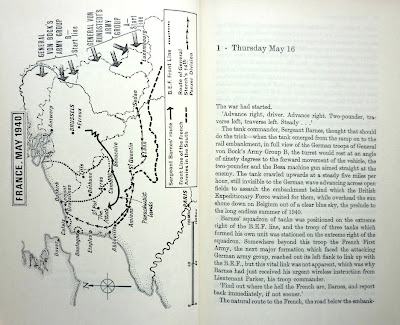