The next three books I'll be showcasing in this series of posts on signed editions all came from renowned book dealer Jamie Sturgeon, who brought them along especially to the most recent Lewes Book Fair (along with some other unsigned books, which I'll unveil down the line). All three are by British thriller writer Raymond Sawkins, who published around forty novels under a variety of monikers over a forty-year period from 1966 to 2006. Sawkins's best-known alias was Colin Forbes, under which appellation he wrote the bulk of his books (a number of which are still in print and available as ebooks), later distancing himself from the early novels he wrote in the 1960s under his own name and under the nom de plumes Richard Raine and Jay Bernard. As is often the case with authors in the wake their deaths, Sawkins/Forbes is increasingly overlooked these days, but he does still have his admirers – Steve Holland at Bear Alley, for one, is a fan of Forbes's early work.

Two of the three Sawkins books I'll be blogging about over the next few days boast unusual inscriptions – certainly more unusual than any of the twenty or so signed Colin Forbes titles currently listed on AbeBooks (most of which date from later in his career) – and while the third isn't signed, it does contain a remarkable piece of related paraphernalia. Let's begin, though, with the earliest novel in the triumvirate: 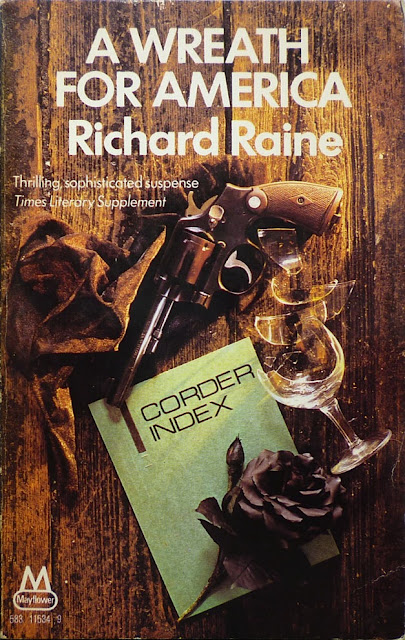 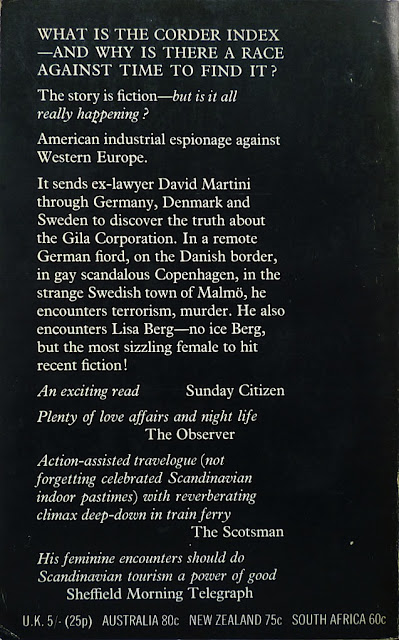 Published in paperback by Mayflower in 1969 (originally published in hardback by Heinemann in 1967), A Wreath for America was the first of three thrillers written under the alias Richard Raine. The Raines have become quite uncommon in any edition, probably because Sawkins effectively disowned them – he preferred to point to the first Colin Forbes novel, 1969's Tramp in Armour, as his debut – and they all fell out of print. But there are a few battered Mayflower paperbacks of A Wreath for America on Amazon Marketplace, and a single Italian edition on AbeBooks. None of those are signed, however, whereas my copy is – although "signed" doesn't really do justice to the inscription on the first page: 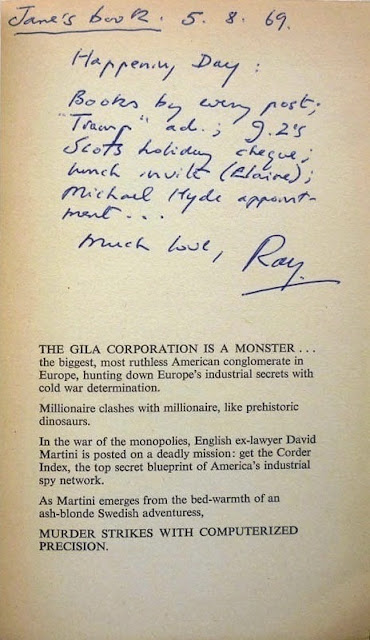 It's a highly personal dedication to Sawkins's wife, Jane, dated 5 August, 1969, and listing the events of that "Happening Day": the arrival of "books by every post"; "'Tramp' ad.", which I think is a reference to the advances of the aforementioned Tramp in Armour, which was due to be published the following month; "9.2º", which, if it's a reference to the day's temperature, sounds pretty chilly for August; something to do with a "Scots holiday cheque"; a lunch invite (from Elaine); and an appointment with Michael Hyde. I haven't been able to determine who Hyde is, but it's possible he was either an editor or publisher, or a fellow writer: a Michael Hyde had a book published by Andre Deutsch in 1968 – Nootka: The Adventures of John Jewitt Among the Red Indians. As ever, if anyone can shed any light on either who Hyde was or any of the other titbits in the inscription, leave a comment or drop me a line via the email address in the right-hand sidebar.

The disparity between Sawkins inscribing a paperback of A Wreath for America to his wife in 1969, only to later rewrite history and remove the Richard Raine books from his own canon, is, to me, quite interesting, and even more so given that the author dedication on the copyright page is also to Jane, which here Sawkins has ringed: 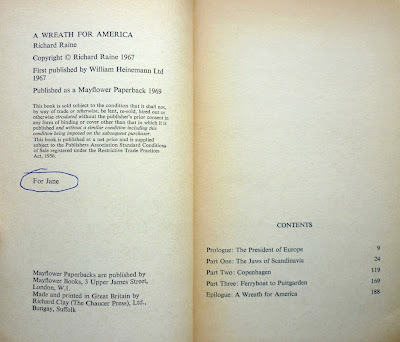 There's a similar dedication in the next book I'll be blogging about, but in that case it's more in keeping with Sawkins's feelings about his various pseudonyms. And once again, the copy of the book in question has been inscribed by Sawkins to his wife, in this instance to mark the occasion of a special anniversary...
Posted by Nick Jones (Louis XIV, the Sun King) at 04:12