Slight change of plan here: I had intended to blog about the final book which begat a perhaps more famous film to start the working week, but unfortunately I haven't finished reading the bloody thing yet; you'll have to hang on another day or so for that. Instead, while we wait, I thought I'd veer off-topic and take a look at a novel that I showcased as a Westlake Score all the way back in September 2010 – in its 1967 UK Souvenir Press first edition – but never got round to reviewing – or indeed showing off properly, as the photographs I took of the book back then were fairly awful. And having since established my Beautiful British Book Jacket Design of the 1950s and 1960s gallery, and the jacket of this particular edition having been designed by an artist who's already in the gallery – S. R. Boldero – it struck me I could kill two birds with one stone... well actually, three: review the novel, add to the gallery, and fill an unexpected hole in Existential Ennui's schedule... 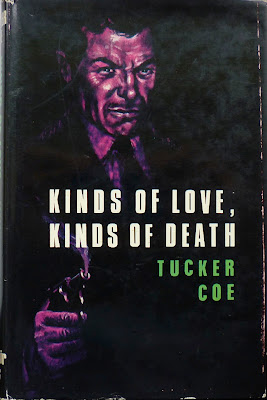 Originally published in the US in 1966, Kinds of Love, Kinds of Death was Donald E. Westlake's first novel under the alias of Tucker Coe, under which moniker he would go on to pen a further four books over the next five years or so. All star disgraced former cop Mitchell Tobin, who, as the series opens, has been off the force for six months following an illicit affair which led to the death of his partner. Mitch's wife, Kate, forgave him the affair (although he's unsure if his thirteen-year old son, Bill, has), but his former colleagues haven't forgiven him the death of his partner – and nor, for that matter has he forgiven himself, which is why he's spent six months doing virtually nothing other than, latterly, building a wall around his backyard.

So when a representative of New York mobster Ernie Rembek turns up at Mitch's house with a job offer, Mitch eventually – reluctantly – agrees – not because he has any interest in the job – which is to find out who within Rembek's organisation murdered Rembek's mistress – but because Kate thinks it will be good for him to do something other than build his wall. And so, attended by Roger Kerrigan – "an observer from the corporation", as Rembek puts it – Mitch sets about interviewing and eliminating suspects, in the process becoming a target for murder himself... 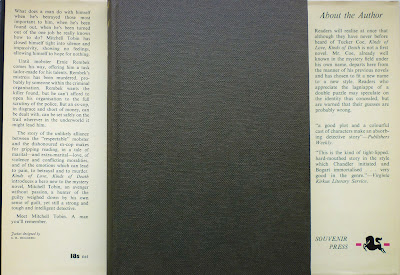 I must admit I was surprised by how good Kinds of Love, Kinds of Death is. Alongside the Parker novels – written, of course, under Westlake's rather better-known nom de plume of Richard Stark – I'd suggest that Kinds of Love is one of the best books Westlake wrote in the 1960s: a restrained yet quietly gripping murder mystery that's all the better for its sober, unshowy approach. Ordinarily my interest in mysteries is minimal – often as not I couldn't care less "whodunnit" – but Kinds of Love transcends its mystery trappings by dint of its fascinating take on mob life, which Westlake depicts as unrelentingly unglamorous. To take just one example, during an interview with one of the mobster suspects, Frank Donner, it arises that Donner and his wife have separate bedrooms, a detail that Mitch finds suspicious. But the explanation proves so mundane it becomes even more believable: Donner's wife admits with embarrassment that she snores.

For his part, Ernie Rembek is an unusual mob boss: he's intelligent and cultured, at one point referencing G. K. Chesterton in relation to overlooking background players in any investigation (a sly nod from Westlake to an influence, there). But each of the gangsters is well-drawn, Westlake-via-Tobin appraising each of them dispassionately – appraising everything dispassionately, in fact – deploying the occasional simile to add colour: noting how the glaring sun makes he and two other men lower their heads "like a trio of penitents", or describing a body, "its arms stretched out ahead of it", as "an acrobat still reaching for the trapeze".

Of course, Mitch's dispassion is a symptom of his lack of interest in pretty much everyone and everything – something that, conversely, serves to make him more interesting as a character – with the exception of his family and his wall, the latter of which he's back to building by the close of the novel. "Mitch, didn't it change anything?" Kate asks him of his investigation. "Change what?" is Tobin's blunt response, suggesting he has a long way yet to travel over the subsequent novels. 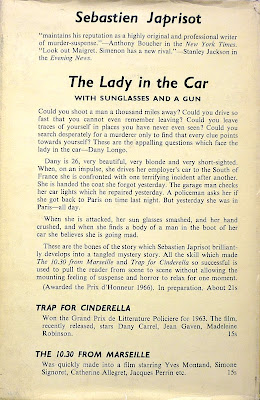 S. R. Boldero's wrapper for the Souvenir Press edition of Kinds of Love, Kinds of Death has now joined his one for Desmond Cory's Johnny Goes South in the Beautiful British Book Jacket Design gallery, taking the total number of covers up to 74. And I'll be adding another couple of Westlake dust jackets before too long, one of which, the British edition of the second Tucker Coe novel, I believe has never been seen online before. Next though: the final book which begat a perhaps more famous film...
Posted by Nick Jones (Louis XIV, the Sun King) at 07:35