I've saved the best for last in this short run of posts on Patricia Highsmith first editions; not necessarily in terms of dust jacket design – I reckon the wrapper for the 1959 Heinemann edition of A Game for the Living takes the top honours there – more that the novel in question is one of Highsmith's most powerful: a clammy study of infatuation, delusion and murder... 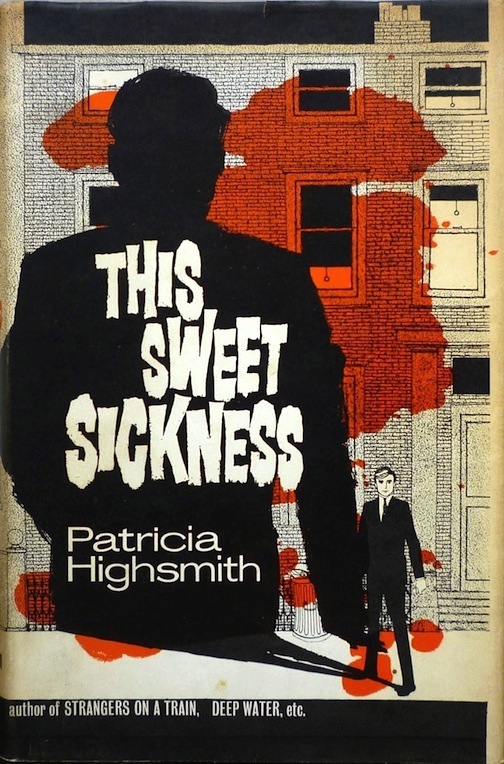 This Sweet Sickness was first published in the US – by Harper – in 1960 and in the UK – by Heinemann, which is the edition seen above – in 1961. The dust jacket of the Heinemann edition was designed by Jack Whitsett, and to my knowledge this is the first time it's been seen online; certainly there are no pictures of the jacket on AbeBooks, where a decent copy of the Heinemann first will set you back £60–£100. 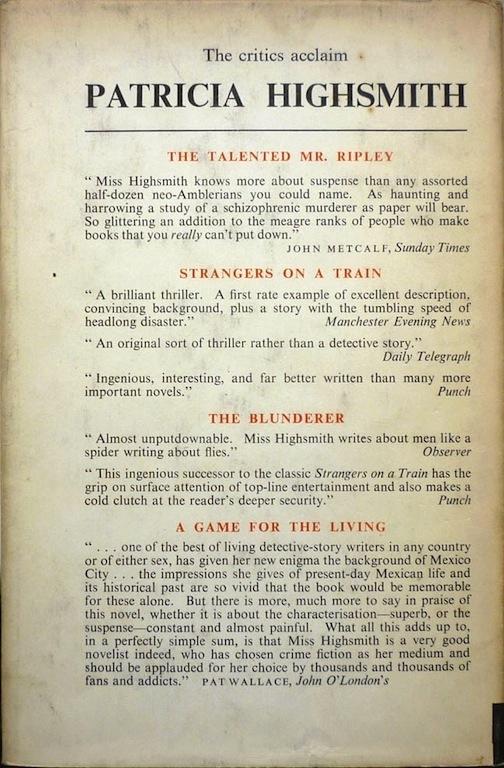 The protagonist of This Sweet Sickness is David Kelsey, a brilliant young chemist living in a boarding house in the (fictional) New York State town of Froudsburg. Every weekend David leaves Froudsburg to spend time with his ailing mother in a nursing home – or at least that's what he tells his few friends and the other residents of the boarding house. In fact David's mother has been dead for years, and David spends his weekends at a house upstate, bought under the name of William Neumeister, and decorated in what David imagines is a manner which will appeal to his one true love, Annabelle. Trouble is, Annabelle dumped David in favour of another man – a turn of events David refers to as "the Situation" – and David has become dangerously obsessed by her – an obsession which drives him to ever more twisted extremes... 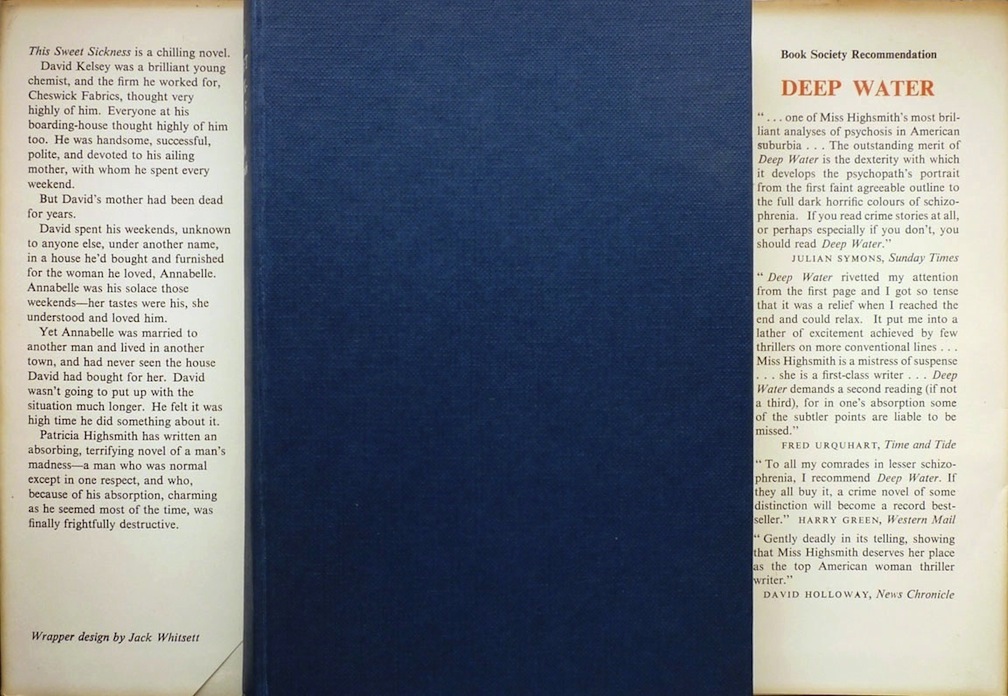 In the twin themes of dual identity and stalking, there are echoes of The Talented Mr. Ripley (1955 – and indeed Ripley Under Ground, 1970) and The Cry of the Owl (1962) in This Sweet Sickness – and the novel is certainly (at least to my mind) the equal of both of those books. Highsmith never deviates from David's viewpoint, so that his obsession with Annabelle becomes almost unbearably intense, developing from frequent letter-writing to unwanted visits to, latterly, violence and murder. Time and time again Annabelle tries to let David down gently – although in the clumsy way that she does, Highsmith suggests that she is also, to a degree, leading him on – and each time David twists her words to suit his own purpose. And once David finds himself with a body on his hands, he becomes caught in a trap of his own making, as his other life as William Neumeister – whom he comes to identify as a separate, more confident (and luckier) persona – crashes into his own, leaving him with no way out of his queasy, self-induced nightmare.

This Sweet Sickness is an unsettling, gripping, brilliant book, up there with The Tremor of Forgery (1969) and even, dare I say it, Ripley's Game (1974) in terms of accomplishment, and its Heinemann dust jacket has now joined the Beautiful British Book Jacket Design of the 1950s and 1960s gallery, along with those of A Game for the Living and The Glass Cell. That brings the total number of wrappers in the gallery up to 70, which is where I'll be leaving things for the moment, because I'm moving on to other matters – namely, in the first instance, a Westlake Score. But before we get to that, I've just been made aware of an intriguing Patricia Highsmith innovation, so look out for a Highsmith bonus post very soon...
Posted by Nick Jones (Louis XIV, the Sun King) at 07:50