A Game for the Living by Patricia Highsmith (Heinemann, 1959); Stein Dust Jacket Design

On to the second of three posts on Patricia Highsmith first editions, each of which, when I'm done, will be joining the Beautiful British Book Jacket Design of the 1950s and 1960s gallery. And this next book is certainly scarcer in British first than the 1965 Heinemann edition of The Glass Cell I blogged about yesterday, and boasts a wrapper that's as beautiful as any other in the British Book Jacket gallery. Disappointingly, however, the novel in question isn't one of the author's best – and its fiercest critic was probably Highsmith herself... 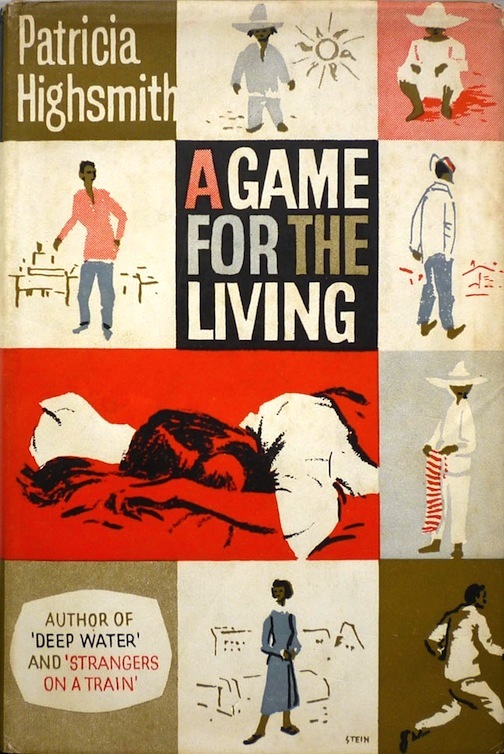 First published in hardback in the UK by Heinemann in 1959 (a year after the US Harper edition), A Game for the Living was Highsmith's sixth novel, and the last to be published in the 1950s. Copies of the Heinemann first edition are in pretty short supply: there are only five listed on AbeBooks at present, one lacking a dust jacket, and the other four ranging in price from just over £30 to £150. The lovely (and little-seen) wrapper was designed by Stein, who was quite active in British publishing in the 1940s and '50s, designing jackets for Carter Dickson, Joan Fleming, Georgette Heyer and others. 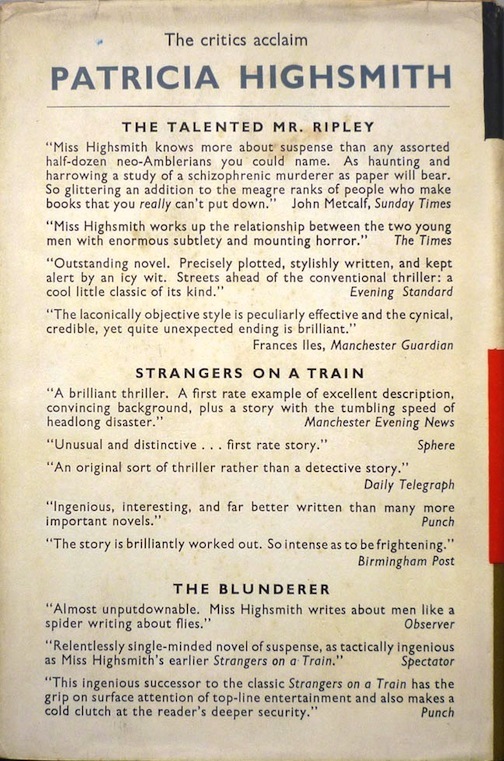 Highsmith's lead in A Game for the Living is Theodore Schiebelhut, a wealthy painter based in Mexico. The novel opens with Theo returning from a painting trip to find his lover, Lelia, brutally murdered. Theo shared Lelia's affections with Ramon Otero, a deeply Catholic, tortured individual whom Theo calls his friend but who is also possessed of a violent temper, and therefore, Theo reasons, theoretically capable of murder. His suspicions are seemingly confirmed when Ramon confesses to the crime – but after interrogation by the police, Ramon is discounted as a suspect... and then Theo starts receiving letters purporting to be from Lelia... 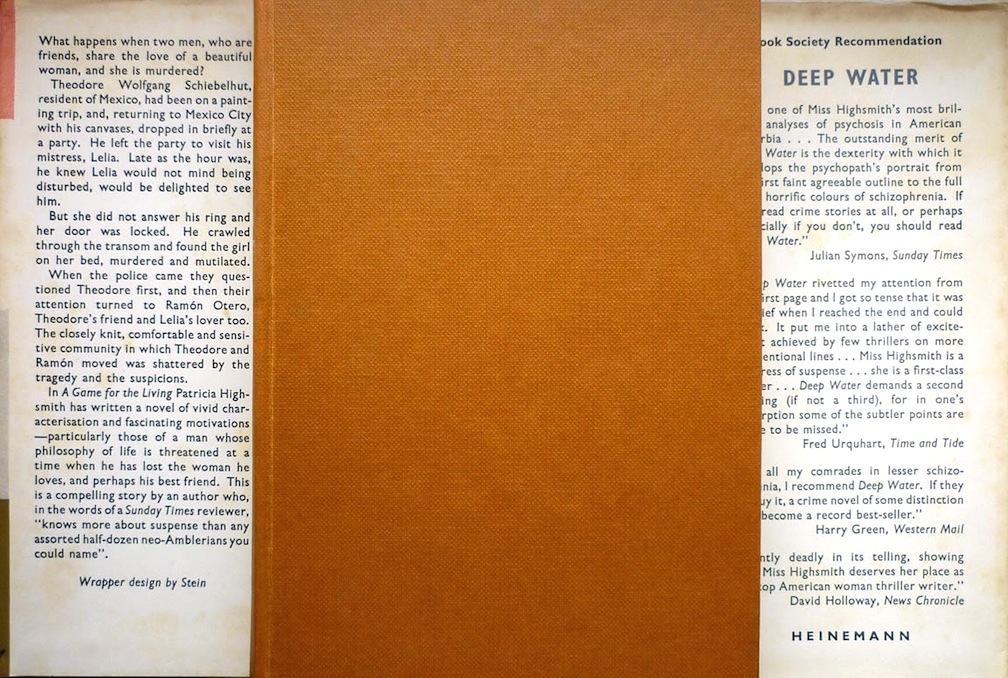 In essence, A Game for the Living is a murder mystery, which makes it an unusual book in Patricia Highsmith's canon – typically the killer in her novels (when there is a killer) is the protagonist, so there's no "whodunnit" to solve. For me, that made A Game for the Living less interesting than others of her works; Highsmith is at her best, I think, when she's concentrating on the psychology of her damaged leads rather than detailing a police investigation, as she does to a large extent here. But although I wasn't terribly keen on A Game for the Living – the relationship between Theo and Ramon is probably the best thing about the book, another exploration of her frequent theme of a strange fascination between two men (see also Strangers on a Train, The Talented Mr. Ripley, The Two Faces of January, Ripley's Game, etc.) – it seems Highsmith herself had an even lower opinion of the novel... In her 1966 non-fiction book Plotting and Writing Suspense Fiction, Highsmith devotes a long paragraph to A Game for the Living, calling it "the one really dull book I have written". She notes that whodunnits are "definitely not my forte", then continues:

I had tried to do something different from what I had been doing, but this caused me to leave out certain elements that are vital for me: surprise, speed of action, the stretching of the reader's credulity, and above all that intimacy with the murderer himself. I am not an inventor of puzzles, nor do I like secrets. The result, after rewriting the book four times in a grueling year of work, was mediocrity. I always say to foreign publishers, and to publishers who contemplate a reprint, "This is my worst book, so please think twice before you buy it." However, I believe that any story can be told properly, using some of the writer's stronger points, but the writer must first be aware of what his stronger points are. I disobeyed my natural laws in this boring book. 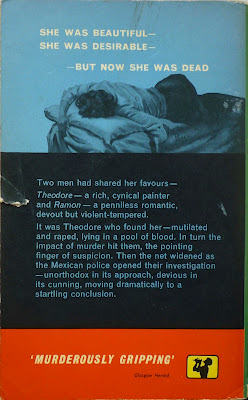 Happily, the final Patricia Highsmith novel I'll be looking at in this run of posts is among her very best, and in its Heinemann first edition boasts a striking dust jacket which, to my knowledge, has never been seen online before...
Posted by Nick Jones (Louis XIV, the Sun King) at 08:04