Remarkably – to me, if not to you – it's been a good six months since I last posted anything substantial about Anthony Price and his David Audley series of espionage novels, and almost a year since I reviewed the fourth book in the series, October Men (1973). Oh, there's been the odd mention here and there, and of course the second Audley thriller, The Alamut Ambush, grabbed the number two spot in my 2011 end-of-year chart; but a proper return to the nineteen-book series is, I think, long overdue. Therefore, presented as part of Patti Nase Abbott's weekly Friday's Forgotten Books initiative – although in truth this terrific book isn't so much forgotten as perhaps under-appreciated these days – let's turn to the fifth Audley novel... 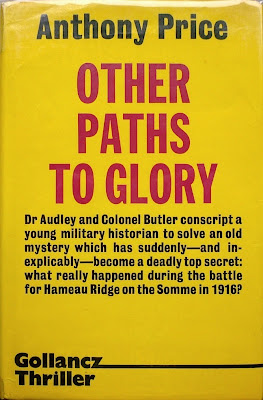 First published by Victor Gollancz in 1974, Other Paths to Glory introduces a new character to Price's series in the shape of Paul Mitchell, a World War I researcher at the British Commonwealth Institute for Military Studies. Mitchell is interrupted at work at the novel's outset by Dr. David Audley and Colonel Jack Butler of the Ministry of Defence's Research and Development Section – although Mitchell is initially unaware of their provenance – who present him with a photocopied map fragment showing German trenches in the Somme and then enquire after the whereabouts of Mitchell's boss, Professor Emerson. Later, on his way home, Mitchell is set upon by unknown assailants and thrown into a dangerous river, only escaping with his life due to becoming inadvertently wedged under a bridge. After finally extricating himself, and with no sign of his attackers, Mitchell arrives at his house to find his mother attended by a policeman and clutching a suicide note – one purporting to be from Paul himself. Furthermore, he's informed that Professor Emerson was killed earlier that day in a fire.

Before Mitchell has had much of an opportunity to digest all this, David Audley turns up again, and eventually convinces Paul to go "underground", letting everyone think he's missing (presumed dead) in order to assist Audley and Butler in their investigation into Mitchell's enforced "suicide", Emerson's apparently not-so-accidental death, and why the professor had become inordinately interested in an obscure engagement during the Battle of the Somme, and in particular a patch of French countryside known as Bouillet Wood ("Bully Wood" to the British troops)... 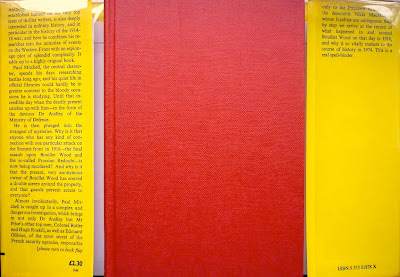 There's a telling line in Other Paths to Glory, when Audley remarks to Mitchell that "the past is always waiting to revenge itself on the present" (a line Anthony Price himself is fond of reiterating). It's a useful summation of the modus operandi of Price's novels, but it's also slightly misleading, in a couple of ways. For one thing, although Mitchell, Audley and Butler must follow the historical threads in Other Paths to Glory in order to reach the truth, that truth – and its attendant threat – is very much in the here and now – or rather, the then and now, i.e. the early 1970s. As Price explained when I met him last year, back then, for him, as for others, Communist Russia and China represented a clear and present danger (he memorably characterized himself to me as a "Cold War warrior"), and Audley and co.'s adventures were his way of addressing that menace. 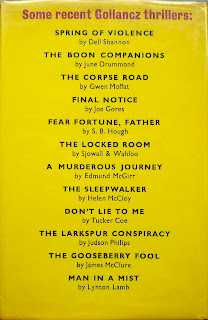 For another thing, there's a kind of reverse-engineering going on in Price's fiendish mysteries. Plot-wise, the starting point for Other Paths to Glory is the Somme of the First World War, but the story really begins – unwitnessed by the players – in France in the "present" day. Mitchell and Audley may follow the path of deduction from the past, but in fact the way is paved from the other direction – indeed from Bully Wood itself, now ringed by an electrified fence and hiding a potentially lethal secret.

As he did in the previous three novels – The Alamut Ambush (1971), Colonel Butler's Wolf (1972) and October Men (1973) – each of which was related from the perspective of a protagonist other than Audley, Price again distances Audley in Other Paths to Glory, adhering firmly to Mitchell's viewpoint and thus making Audley more inscrutable and enigmatic than he would otherwise appear. There's a good reason for this narrative choice: Audley is invariably the cleverest man in the room, and usually three paces ahead of anyone else, which was why in the first novel in the series, The Labyrinth Makers (1970) – told, remember, from Audley's point of view – the withholding of information which was necessary in order for the mystery to work became more conspicuous. In Other Paths to Glory, however, Audley only tells Mitchell – and consequently the reader – what he needs to know, so that any concealment on Price's part is less noticeable, more natural – although it must be said that Audley is himself often in the dark. 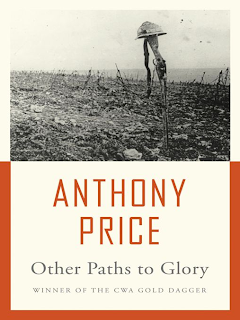 But Mitchell also inherits Audley's role from The Labyrinth Makers, in that here Paul is the neophyte field man, propelled into perilous situations beyond his control. As such, his perspective on the other characters – Audley, the irascible Butler, and even Hugh Roskill, here making only a brief appearance after the traumatic events of The Alamut Ambush – is both illuminating and frequently amusing, their conversations – those pages of puzzle-solving dialogue that are the hallmark of Price's novels – as deliciously engrossing as anything from the four prior books.

In the end, Paul's bacon is saved by, aptly, an historical artefact, and despite an explicit warning from Roskill, who knows only too well from first hand experience how getting mixed up with Audley can impact a person's life (paraphrasing Bruce Bairnsfather's famous WWI cartoon, Roskill tells Mitchell, "'If you know of a better hole, go to it.' And that's pretty damn good advice, it seems to me—as far as you're concerned"), it's evident that Audley's promise of further intrigue and mystery has him hooked. Which, it transpires, may have been the aim all along...

Other Paths to Glory is a cracking spy thriller: brainy, gripping, scholarly in its grasp of the minutiae of the Great War – witness the testimonial on the right – and a fine whodunnit to boot; it's easy to see why it claimed the Crime Writers' Association Gold Dagger for 1974 (going one better than The Labyrinth Makers, which had to settle for a Silver Dagger). Moreover, unlike many of the books I blog about, it's still in print, and readily available as both a paperback and an ebook.

I will, of course, have more on Anthony Price down the line, including a review of the next book in the David Audley series, Our Man in Camelot (1975) – said review hopefully appearing rather sooner than this one did. Next, though: all being well, another Westlake Score...
Posted by Nick Jones (Louis XIV, the Sun King) at 04:09