After a second series of posts on Desmond Cory and his Johnny Fedora spy thrillers – and a Beautiful British Book Jacket Design of the 1950s and 1960s interlude – this week I'm returning to another Existential Ennui favourite: cult British suspense novelist P. M. Hubbard. I've had two runs of posts on Hubbard thus far – the first in May 2011, the second in November 2011 – and I've two further Hubbard first editions to blog about now – both very scarce in any edition, and the never-before-seen-online wrappers of each of which will be joining the aforementioned Beautiful British Book Jackets gallery. That said, however, this first book shouldn't, strictly speaking, really qualify for the gallery, but its jacket was designed by an illustrator who, aesthetically, very much belongs to that '50s/'60s heyday of dustjacket design... 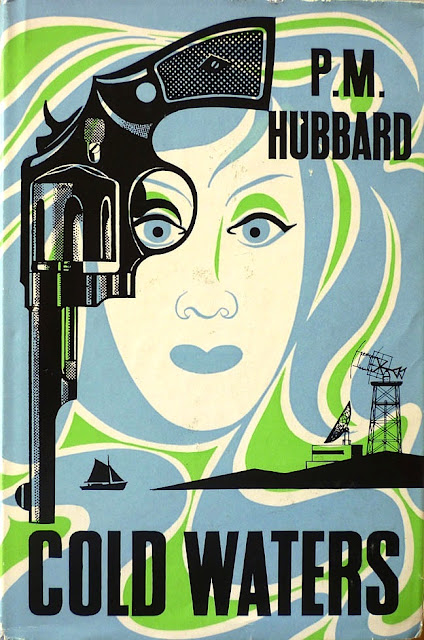 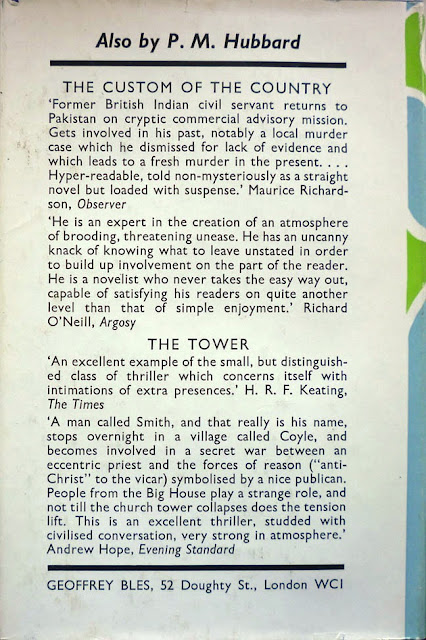 First published in the UK by Geoffrey Bles in 1970 (a year after the US Atheneum edition), Cold Waters was Hubbard's ninth novel (including his two children's novels), and is a typically, quietly menacing tale set on a remote island (shades of the earlier A Hive of Glass there) in Scotland. Wyatt James's Annotated P. M. Hubbard Bibliography notes that the narrator, a married London businessman named Giffard, "is one of those cynical, depressed, but over-curious types the author does so well", and that "being that sort of Hubbard hero" Giffard sleeps with both his employer's wife and the maid. 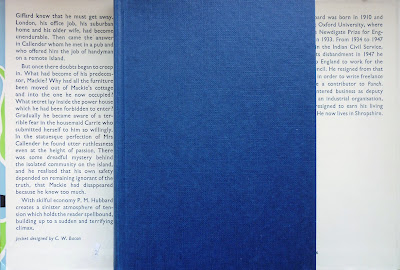 In common with many of Hubbard's novels, copies of Cold Waters are thin on the ground: there are currently only seven listed on AbeBooks, all bar one of those being the Atheneum edition – the exception being a Bles first in Australia. The terrific dustjacket on the Bles edition was designed by C. W. Bacon, who is, in fact, illustrator Cecil Walter Bacon (who also signed his work as "CWB"). The list of jackets Bacon designed from the late-1930s to the early '70s is impressive, but he's perhaps better known as a poster designer – including many for London Transport – and for his long association with the Radio Times. So while his wrapper for Cold Waters may date from 1970, stylistically it's very definitely in keeping with other jackets in Beautiful British Book Jacket Design of the 1950s and 1960, which is why I've now added it to the gallery.

The second Hubbard dustjacket I'll be showcasing, however, does fall within the established '50s/'60s remit of the gallery, and wraps around a very early – and in some ways atypical – Hubbard novel – one which is pretty hard to come by these days...
Posted by Nick Jones (Louis XIV, the Sun King) at 07:05