Let's round off this short run of George Pelecanos posts with a bunch of first editions, all of which I bought in the same London bookshop in summer of last year, and most of which feature one of the leads from Pelecanos's latest novel, What It Was. Beginning with: 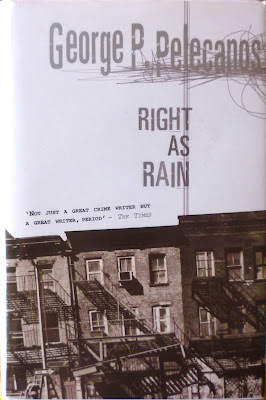 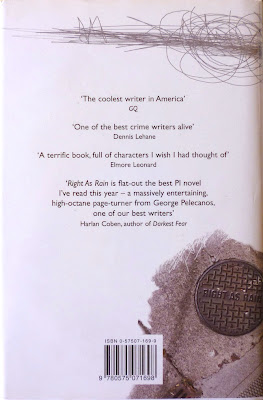 A British hardback first edition of Right as Rain, published by Orion in 2001, the same year as the US Little, Brown first edition. This, like all of the books I'll be showcasing in this post, was bought in Henry Pordes on Charing Cross Road in June 2011, during my two-week tour of England's secondhand bookshops (obviously this was during the London leg of the tour). The first editions in Henry Pordes are situated on the ground floor as you enter, but on the spur of the moment I decided to have a quick look in the basement, which is usually stocked with (not especially interesting, before you ask) paperbacks. On this occasion, however, the shop had evidently had a clear-out, because there was a stack of first editions downstairs, all priced at a few quid each, and mostly of a crime fiction bent. And even better, four of 'em were by George Pelecanos.

Naturally, I snapped those four up. None of them are especially scarce or valuable, but they are all in very fine condition, about the best state a person could ever hope to acquire them in, so I was dead chuffed to nab the whole lot for under fifteen quid, especially as each one individually would normally cost about that anyway. Right as Rain is the first in Pelecanos's series starring Washington P.I.s Derek Strange and Terry Quinn – the former of whom, as I indicated in the intro to this post, also features in What It Was (in a much younger incarnation, What It Was being set in 1972). There's a synopsis and excerpt on George Pelecanos's website, and an insightful review of the novel on Rick Kleffel's Agony Column.

And from the first Strange/Quinn outing... to the second: 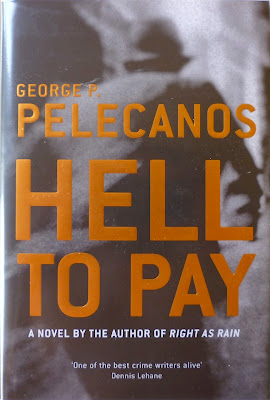 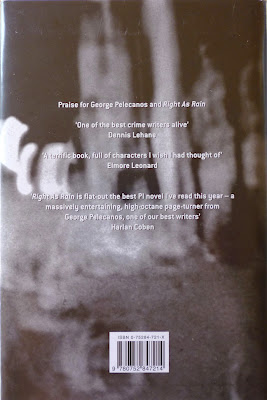 Hell to Pay, again published in hardback in the UK by Orion, this time in 2002. Not untypically for Orion, the design of the dustjacket is uncredited – Right as Rain's jacket design is similarly uncredited – but the front cover photo is by Ed Holub – and if you're wondering at this point why I didn't tell you who took the photo on the front of Right as Rain, that's because there's no credit for that, either. Hell to Pay is, as I say, the second of Pelecanos's three novels starring Derek Strange and Terry Quinn (Strange of course features in a further two – the aforementioned What It Was, and 2004's Hard Revolution); there's a synopsis and extract on the author's website, and an entertaining and personal review by Karen G. Anderson on the January Magazine site. And to complete the set: 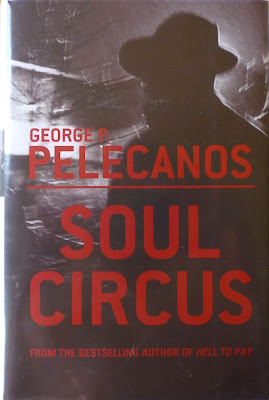 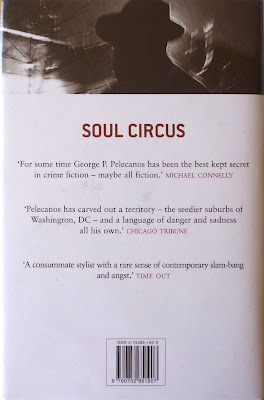 The third Strange/Quinn novel, Soul Circus, published in hardback by Orion in 2003. The cover photo is again by Ed Holub – or "Edward" as he's credited here – and as with the previous two books, you can find a synopsis and excerpt on Pelecanos's site. Reviews aplenty there are of this one online, but you could do a lot worse than the reliable Mark Lawson of The Guardian. 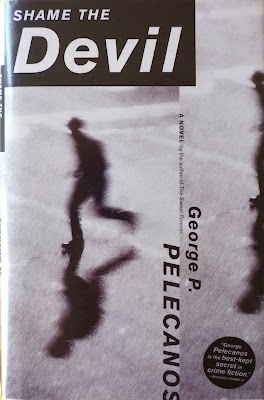 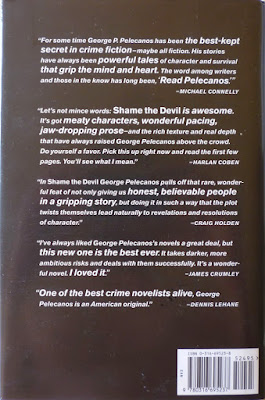 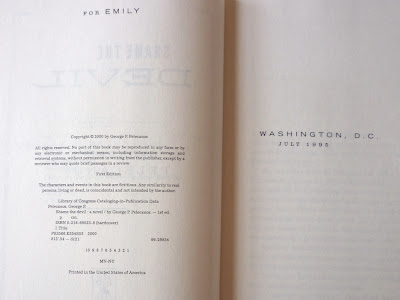 Shame the Devil, published by Little, Brown in the States in 2000. This one is the fourth entry in what's known as the D.C. Quartet – but it's also an entry in the Nick Stefanos series – see also A Firing Offense (1992), Nick's Trip (1993) and Down by the River Where the Dead Men Go (1995) (and, in briefer appearances, Soul Circus and What It Was) – as Nick features in this one, too. George Pelecanos's website has a synopsis (no extract in this instance, though), but allow me to direct you towards my esteemed friend Olman for a fuller review, including links to reviews of the three prior D.C. Quartet novels. Unlike Orion, Little, Brown are perfectly happy to credit cover designers, and the jacket on this US edition was designed by Tom Brown, utilising a photograph by Joshua Sheldon. And also unlike Orion – and most other British publishers for that matter – Little, Brown have chosen to finish the book with lovely deckled edges – on which nerdily bibliophiliac note it's probably best to draw a line under the Pelecanos posts.

Next on Existential Ennui: a bit of housekeeping, and some links.
Posted by Nick Jones (Louis XIV, the Sun King) at 07:25