Book Review: What It Was, by George Pelecanos; Orion Limited Edition Signed Hardback, 2012

On to the second post in this short George Pelecanos "season" on Existential Ennui. And having reviewed Pelecanos's 2011 novel The Cut, I'm turning now to the second Pelecanos book to have been published in the past six months – in a rather splendid UK-only edition.... 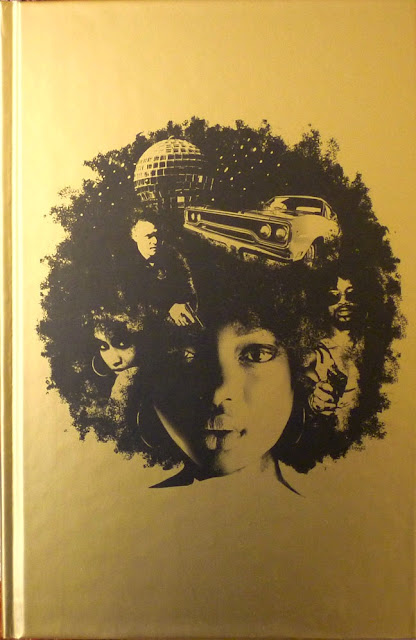 Published by Orion on 9 February, this is the British hardback of What It Was, George Pelecanos's eighteenth novel, and the fifth to star Washington, D.C. policeman-turned-P.I. Derek Strange – or rather, co-star; Strange is teamed with fellow investigator Terry Quinn in three of those books, and shares this latest one with two other leads. Before we get into the plot, though, I just wanted to spend a moment on this particular edition of What It Was, because it's a little unusual. For one thing, the format isn't the standard hardback arlin-covered case with dustjacket; there's no jacket, and the case is finished as metallic gold, with that striking blaxploitation-style image (different to the US edition) printed directly onto it. For another, the UK hardback is limited to just a thousand, numbered copies. And finally, each of those thousand, numbered copies is signed by Mr. Pelecanos himself: 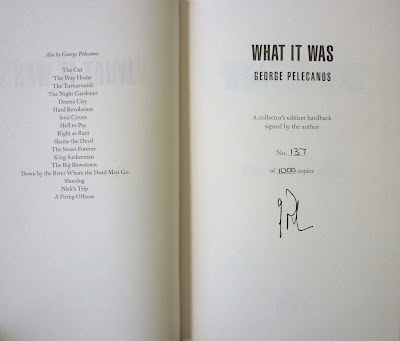 Mine's number 137, as you can see. It's an interesting strategy on Orion's part, reflecting recent news of ebook sales apparently eating into hardcover sales, as a result of which many publishers are now seeking to make their hardbacks more desirable as objects. And it certainly did the trick here: ordinarily I tend to hold off buying brand new hardbacks, waiting until I chance across cheaper copies, but in this instance I snapped one up from Amazon as soon as it became available. 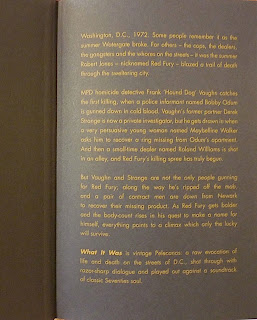 I'm glad I did, too, because What It Was is at least the equal of The Cut, and in some respects even better. Set in Washington during the summer of 1972 – also, not entirely coincidentally, when the Watergate scandal broke – it's the story of Robert Lee Jones, a.k.a. Red Fury, a small-time crook who suddenly steps up a league and starts robbing and murdering his way across the city in an attempt to secure his legend. But it's also the story of Derek Strange, not long departed from the D.C. police force following his experiences during the 1968 race riots (as related in 2004's Hard Revolution), now beginning to establish himself as a private investigator and on the hunt for a missing ring; and of Frank Vaughn, alias Hound Dog, the veteran cop on the trail of Red. And over the course of the summer the fates of all three men become intertwined, leading towards a bloody showdown in a forgotten part of the capitol.

I hesitate to use the word "fun" to describe a novel in which lots of people are shot and killed, but in comparison to the gloomy likes of The Way Home (2009) and, to an extent, The Cut, What It Was is practically a knockabout farce. Pelecanos seems to be enjoying himself immensely – he wrote the book fast, in three months – detailing a period of American history when black music and cinema and fashion were all reaching a colourful, superfly crescendo (almost obsessively detailing, in fact: much in the way that The Cut seemed preoccupied with geography and street names, What It Was compulsively catalogues clobber; barely a character is introduced without reference to their "stacks" and "bells"). In a note at the start of the book Pelecanos reveals that What It Was began life as a much more weighty Watergate novel – one the author "had no great desire to write" – and elements of that intended work do make it over to What It Was, notably a fleeting appearance from a real life, key (but ultimately tragic) player in the scandal. Thankfully, however, What It Was wears its history – its own and the era it documents – lightly; it's the characters that matter here. 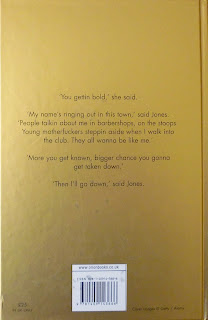 And those characters all feel so alive, both in the sense of being rounded and believable, and in that they're open to the possibilities and opportunities of the epoch they're living through: Strange striking out on his own as a P.I.; Vaughn revelling in the job he loves (and is damn good at, despite what the suits believe); Red violently carving out his place in history. Unlike the bad guys in other Pelecanos books, though, Jones isn't a completely monstrous creation (a visiting mobster – with imbecilic partner in tow – fills that role this time): he's merciless, sure, but also charismatic, engendering unquestioning loyalty in both his girlfriend, Coco, and his right-hand man, Alfonzo Jefferson. Certainly Vaughn, for one, understands and even respects Red's motives; as the detective tells Strange: "The clock ticks. You get toward the finish line, you realize that what's important is the name you leave behind... Red Jones gets it."

That notion of leaving a mark on history is reinforced by the novel's framing device, which features Derek Strange in a bar in the here and now telling the tale of Red Jones and Frank Vaughn (and himself) to a character from a different Pelecanos series: Nick Stefanos, star of A Firing Offense (1992), Nick's Trip (1993) and Down by the River Where the Dead Men Go (1995). Strange and Stefanos have known each other for a while – Nick made a guest appearance in the last "contemporary" Strange novel, 2003's Soul Circus – but in the closing moments of this latest drinking session, Pelecanos seems to be suggesting that not only has their legend yet to be written... but that it'll be a legend shared.

And speaking of Soul Circus, that novel and its two fellow Derek Strange/Terry Quinn outings will form the basis of my third and final Pelecanos post, in which I'll be looking at first editions of all three books...
Posted by Nick Jones (Louis XIV, the Sun King) at 16:20