It's been a while since I blogged about American author George Pelecanos; the last time I did so at any length was back in November 2010, although I did mention him in passing in this review of Richard Price's The Wanderers last year. But it just so happens that I've recently read two of Pelecanos's novels in quick succession – and since I also have a bunch of others of his books still waiting to be blogged about, I thought I'd gather all of that together for a short run of Pelecanos posts, beginning with a review of a novel which made it to the number 9 spot in my 10 Best Books I Read in 2011 chart: 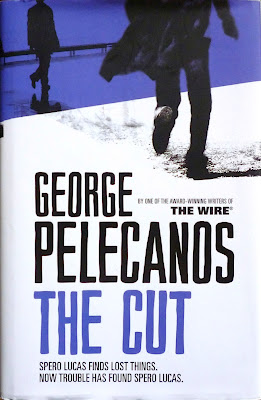 The Cut, first published in 2011 by Reagan Arthur in the US and Orion in the UK (which is the edition you can see above). Now, I've a particular reason for cross-posting this review on The Violent World of Parker, as well as on Existential Ennui. I mean, George Pelecanos being ostensibly a crime novelist, and Donald E. Westlake/Richard Stark being an acknowledged influence on Pelecanos, obviously there's a certain amount of crossover anyway. But on top of that there's an explicit nod to Westlake's work in The Cut, one which will bring a smile to every Parker appreciator's face.

I'll return to that shortly, but first, the novel itself. The initial offering in a projected new series from Pelecanos, The Cut stars Spero Lucas, a young private investigator based in Washington, D.C. Except Spero isn't, in the strictest sense, an investigator; he's actually more of a finder. For a percentage of whatever it is he's recovering, Spero will track down lost or stolen property, whether that property be legit or otherwise. Spero's latest case sees him tasked with retrieving a package of marijuana, which was delivered via FedEx to a suburban address (a popular way of importing drugs, apparently) and then promptly stolen before the lieutenants working for the owner of the weed, Anwan Hawkins (who is currently languishing in jail), could get to it. In the course of the ensuing investigation, Spero finds himself tangling with a gang of ruthless killers and a corrupt cop, in the process unwittingly causing the kidnapping of a schoolboy...

I mentioned above that George Pelecanos is (ostensibly) a crime writer, but in truth his books are really only crime fiction in the way that, say, The Wire is crime fiction. Like that groundbreaking TV show – for which Pelecanos wrote, of course (and continues to do so for Treme, The Wire creator David Simon's follow-up) – while there is lawlessness in Pelecanos's books, that's only one strand of their genetic make-up. At root, Pelecanos is a chronicler of contemporary urban America – especially Washington, his home town – with all that that entails: criminal activity, obviously, but also the city's bars, restaurants, parks, police, neighbourhoods and people – working class, middle class, underclass, and all points in-between.

I've never been to Washington, but so effectively does Pelecanos convey the sights and sounds, smells and tastes of the place that, should I ever find myself there, I'll probably experience an overwhelming sense of déjà vu. (I'll certainly be seeking out one of the delicious-sounding breakfasts Spero indulges in.) Indeed, so detailed are Pelecanos's descriptions of Washington's streets, blocks and corners in the novel that occasionally the experience is akin to reading an A-Z. Curiously, though, despite this seemingly slavish attention to detail, the geography isn't always accurate: my good and learned friend Book Glutton – a resident of D.C. – reports that some of the boundaries, bars and street numbers in The Cut are a little off – and also that some aspects of the police work depicted are inaccurate.

These are minor quibbles, however, to be chalked up to either artistic license or possibly deliberate obfuscation in order to protect real people and places: more importantly, Book Glutton reckons that The Cut brilliantly captures what it's like to live in Washington, and to me it felt utterly convincing: a vivid picture of a city largely recovered from the years of gang violence which blighted it, but still with its problems. It's also, I'd venture, a better book than Pelecanos's previous novel, The Way Home, which, though good, featured a pair of villains who'd apparently wandered in from a completely different story. By contrast, the bad guys in The Cut are integrated in a much more organic fashion, and in Spero Lucas, Pelecanos has the kind of intriguing protagonist that The Way Home lacked. Adopted and raised by a Greek family, an Iraq War veteran who's pretty handy in a fight (look out for a brutal, desperate hand-to-hand struggle in a vacant lot), Spero isn't without his flaws – he has a tendency to follow his dick around, for one thing – but he's an engaging lead, and having learned some hard lessons by the close of the novel he emerges as a character who should easily sustain a series. 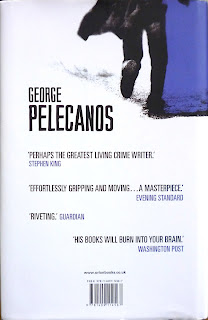 As for that Westlake/Stark connection, that comes three-quarters of the way into the novel, in scene in which Spero's adoptive brother, Leo, is teaching a public high school English lesson. The book Leo has chosen for his class is the debut Parker outing, The Hunter (in an '80s Avon edition, no less), and the discussion around the novel is lively and entertaining, the unruly kids finding Parker a compelling creation. But there's one kid in class, Ernest, who's a real movie buff, and in Ernest's thoughts on which is the best Parker movie, the guiding hand of Pelecanos the Westlake fan can be clearly seen.

Pelecanos seems to be on something of a roll at the moment: The Cut only arrived in August of last year, and yet the author has already had another novel published in the interim. And in the next Pelecanos post, I'll be reviewing that novel, in a highly collectible British edition... 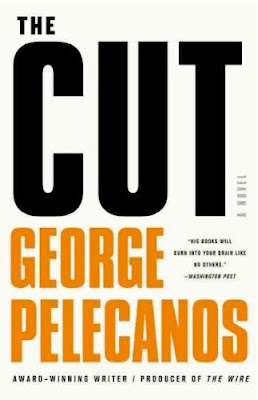