As you'll no doubt already be aware if you've read Violent World of Parker supremo Trent's earlier post, today is Donald E. Westlake Day. Instigated by Patti Abbott to mark the imminent publication by Hard Case Crime/Titan Books of the "lost" Westlake novel The Comedy is Finished (imminent in the States, anyway; I don't think it's out in the UK till April, so I'll be reviewing it on Existential Ennui nearer that pub date), all over the web today fine folk are posting reviews of an array of Westlake works. Trent's already reviewed Westlake's 2004 standalone novel Money for Nothing, and for my part, I'm pressing on with my ongoing reviews of Westlake's two best-known series: the serious novels starring taciturn crime automaton Parker (written, of course, under the alias Richard Stark), and the not-so-serious ones starring hard-luck heister John Dortmunder (written, of course, as, er, well, Donald E. Westlake). And it just so happens that I've serendipitously reached a juncture at which those two otherwise independent-from-one-another series intersect: Jimmy the Kid. 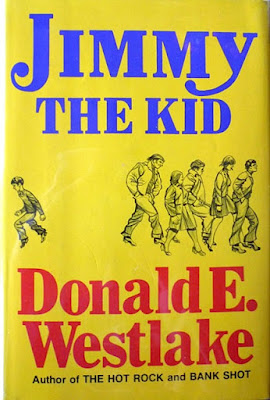 First published by Evans in the US in 1974 and Hodder in the UK in 1975, Jimmy the Kid – the third Dortmunder novel, following The Hot Rock (1970) and Bank Shot (1972) – is in many ways the culmination of the inter-book experiments Westlake had been running since he'd spun the first Alan Grofield solo novel, The Damsel (1967), out of the eighth Parker novel, The Handle (1966; and even earlier if you count Westlake's sleaze paperback collaborations with the likes of Lawrence Block) – see Plunder Squad's crossover with Joe Gores's Dead Skip, Butcher's Moon's revisiting of characters and plot threads from across the whole Parker series, and so on. Jimmy the Kid, however, goes one better. The story sees Dortmunder and his luckless crew – Andy Kelp, Stan Murch, Murch's Mom and Dortmunder's girlfriend, May – enacting an elaborate scheme to kidnap a kid for a ransom. But the plan has come from a novel place: a novel, in fact; a novel Kelp read during a brief stay inside; a novel titled Child Heist, written by an author named Richard Stark, and starring a taciturn crime automaton known as Parker...

It's a metafictional conceit worthy of James Hogg or Laurence Sterne: not merely a book-within-a-book, but a book-within-a-book written by the author's pseudonymous alter ego, in the authentically flat, pared-back style of that alter ego, and featuring that alter ego's most famous creation. Entire chapters of the Parker vehicle Child Heist are stitched into Jimmy the Kid, alongside subsequent chapters where Dortmunder and co. attempt to follow Parker and co.'s plans (and usually screw them up). Moreover, Child Heist is itself a work of fiction – i.e., it's a fictional piece of fiction. Outside of Jimmy the Kid, it doesn't exist – there's is no Parker novel called Child Heist. And to cap it all, towards the end of Jimmy the Kid, the similarly fictional author Richard Stark also puts in an appearance (as does his lawyer). 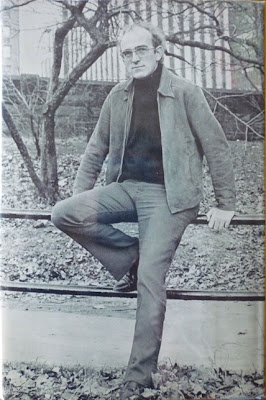 At a near-forty year remove, it's difficult to imagine what readers in 1974 would have made of all this. For sure, even if they'd heard of Richard Stark or knew his work, few would have been aware of the relationship between Stark and Westlake – after all, even today, outside of hardcore Parker nuts like us lot, to what extent is Joe Reading Public truly cognizant of Westlake's "dark half" (or indeed Stark's lighter one)? And even for those fortunate enough to have made the connection back then, with little in the way of bibliographical guidance in that pre-internet era, to be presented with the tantalising prospect of a "missing" Parker novel must have been maddening (and judging by the search terms I see in Existential Ennui's back-of-house stats, still is for some Parker neophytes).

It's a shame, then, that Jimmy the Kid the novel doesn't quite live up to the promise of Jimmy the Kid the meta-experiment. The innate absurdity of the set-up doesn't especially translate into belly laughs, although there are certainly moments that raise a smile and occasionally a chuckle. For my money (ahem), the preceding Dortmunder novel, Bank Shot, is the better book. There, the equally ludicrous scenario which plays out is matched by an expertly executed, gradually escalating climactic joke; in Jimmy the Kid, while there is a comedic twist, it's perhaps too heavily telegraphed to be completely effective.

Mind you, the way it's handled is both inventive and amusing, and does at least set Dortmunder up for one last, well-aimed kick in the teeth. And anyway, for the Dortmunder fan, the Parker completist, and for those interested in the literary games Westlake played, Jimmy the Kid is pretty much indispensable: a unique book in the Westlake canon. Which is why for many – Trent among them – it's a cause for celebration that after years spent languishing in semi-obscurity as an out-of-print curio, Jimmy the Kid is now readily available for the Kindle. Although it's perhaps less of a cause for celebration for those of us who forked out for first editions of the damn thing...

Next on Existential Ennui, kicking off a short run of George Pelecanos posts, we move from a novel featuring a metafictional guest appearance from Parker, to another, more recent novel which also boasts a meta-Parker appearance...
Posted by Nick Jones (Louis XIV, the Sun King) at 05:01