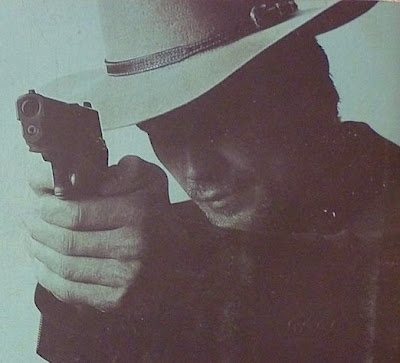 Way back in the dim and distant past – in fact around this time last year, oddly enough – I posted a series of reviews of Elmore Leonard's crime fiction stories featuring US Marshal Raylan Givens, comparing them to the TV show they inspired, Justified – my belaboured point being that Justified is the most faithful adaptation – in spirit, tone, characterization and even dialogue – of Leonard's work yet seen. Those three posts – on the novels Pronto (1993) and Riding the Rap (1995) and the short story "Fire in the Hole" (2002), plus an introductory piece – proved pretty popular, together receiving thousands of hits from fans of Justified investigating the source material. The final one in particular, on "Fire in the Hole", ended 2011 as the most viewed post of the year on Existential Ennui, and continues to attract a fair bit of traffic even now (perhaps understandably, given each episode of Justified boasts the legend "Based on the short story 'Fire in the Hole' by Elmore Leonard" in its titles).

Justified is now into its third season in the States and seemingly going from strength to strength, but an unexpected bonus of the show's creative success has been that it inspired Elmore Leonard – an executive producer on Justified – to pen further Raylan Givens stories, something I doubt he'd have done if the show hadn't existed. Indeed, according to Justified's creator and show runner, Graham Yost (quoted in this recent Reuters piece), it was the actor who plays Raylan, Timothy Olyphant, who suggested to Leonard that he write some more Raylan tales – and those tales in turn inspired aspects of Justified's second season and reportedly even its third (Leonard was showing his new stories to Yost and co. as he wrote them). 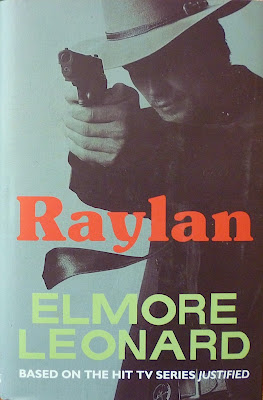 The end result of Olyphant's intervention, the prosaically titled Raylan, is published in hardback by Weidenfeld & Nicolson in the UK on Thursday (it's been out in the US for about a month already), and the first thing to note is that it isn't so much a novel as three short stories – or, more accurately, novellas – stitched together – a consequence of the way the book was written; according to Yost, Leonard wrote one story, then just kept going until he had three. But the three separate tales aren't presented as such, and so even though there are plot strands which tie them together, there's an episodic feel to the work, with noticeable changes of direction. Moreover, the relationship between Leonard's book and Justified isn't quite so clear cut this time; whereas previously the show's makers lifted Leonard's Raylan stories almost verbatim, this time they've been more selective, taking elements and scenes and altering them as they've seen fit. (Leonard's instructions to Yost regarding the novel were, "Hang it up and strip it for parts.")

The main plot in the first third of Raylan hasn't yet shown up in Justified, and centres on the illegal removing of internal organs from unwitting victims around Harlan County, Kentucky, where Raylan grew up and now lives and works (having been exiled there in "Fire in the Hole"). But it does involve Pervis Crowe and his feckless offspring Dickie and Coover – and it's these three characters, in an altered form, that Yost and his team made the focus of the second season of Justified. While in the book the Crowes are distantly related to the hapless Dewey Crowe, in the show they become the Bennetts, and Pervis changes from patriarch to matriarch, in the form of Mags Bennett. Hopefully that organ-stealing story will turn up in Justified at some point though, because it's a classic example of the way Leonard confounds expectations – the kicker is that the organ thieves are selling them back to their original "owners" – and climaxes with Raylan naked bar his boots in a bathtub filled with ice (steady, ladies). 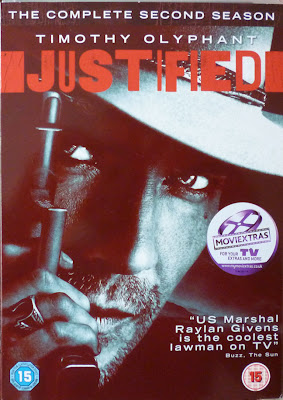 Story #2 forms the basis of Justified season two's main arc, and sees Raylan assigned to protect hard-assed operator Carol Conlan of M-T Mining, a company seeking to buy the presumed coal-rich Big Black Mountain, which, it transpires, is owned by Pervis Crowe. Here we see the return of Boyd Crowder, Raylan's former friend and now nemesis. Boyd is working for M-T, and gets mixed up in a shooting when a disgruntled local vents his frustration at the way the mining company has been polluting the area. This part of the book hinges on a town meeting to discuss M-T's plans, during the course of which Raylan fatally undermines Carol's argument, and amidst all the – admittedly enjoyable – gunplay of Raylan, to my mind it's this scene which is the highlight of the entire enterprise; it's notable that it's duly transported wholesale – along with Carol – to season two of Justified.

Now, those familiar with Leonard's original "Fire in the Hole" story might, at this point, be wondering how on earth Boyd Crowder can feature in Raylan, since, counter to the events of Justified, Boyd died at the end of Leonard's tale. Leonard offers no explanation for Boyd's miraculous resurrection, although he does slyly address it in a couple of lines from Raylan during a tense standoff: "You thinking about the time I shot you and you rose from the dead? It only happens once in your life." But it's clear throughout Raylan that Justified didn't merely reignite Leonard's interest in the character of Givens; seems the writer fell back in love with much of the cast of Harlan County, not just Boyd but also Ava (it was Leonard's idea to have those two getting together, something that again plays out in Justified season two) and especially Raylan's long-suffering boss, Art Mullen, who features repeatedly in the book.

The final section of Raylan again changes tack, setting Givens on the trail of twenty-three year old Rachel Nevada, alias Jackie Nevada. Jackie is something of a card sharp, but she may also be mixed up in a string of bank robberies, so Raylan heads over to Lexington to get to the bottom of things, in the process partnering up with Marshal Bill Nichols. Nichols has already made an earlier appearance in Raylan, in a scene which is one of the most wryly amusing in the book:

"More than one," Raylan said.

"It doesn't matter how many, does it?"

"Not a bit," Raylan said. "Once or twice I might've been lucky."

"You get to where you have to pull—"

They knew each other.

Essentially, Nichols is an older version of Raylan, and though Leonard doesn't do much with him in Raylan, one senses the author is setting him up for further appearances down the line. The same goes for Jackie Nevada, with whom Raylan really hits it off – and Graham Yost having stated that he and his fellow writers and producers will be using further bits of Raylan in season three of Justified (and season four, if there is one), I wouldn't be at all surprised if both Jackie and Nichols make it onto our TV screens at some point. 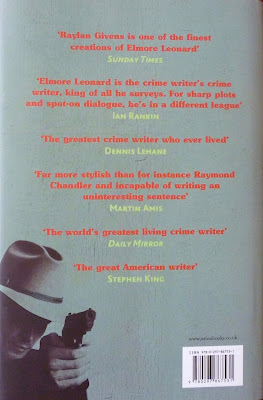 Martin Amis once said of Elmore Leonard that Leonard is "incapable of writing an uninteresting sentence" (Amis also favourably reviewed Riding the Rap, and called Get Shorty – quite correctly in my opinion – "a masterpiece"), and that's as true of Raylan as of any others of Leonard's novels and stories. Due to its origins it's not the most tightly plotted of his books, but in its charmingly meandering way it's as sublime – not to mention purely pleasurable – a reading experience as you could wish for. That's down to Leonard's by-this-juncture utterly effortless storytelling, not to mention his beautifully idiosyncratic and allusive dialogue, the way he can lightly sketch characters who nevertheless fair leap from the page, and the occasional emotional gut-punches he seeds throughout the book.

But Raylan also exerts a strange fascination for the way it came into being. It's been called an "alternate universe" version of Justified in some quarters, but that strikes me as an inadequate explanation for what it actually is: a piece of Elmore Leonard fiction inspired by a television show that was in turn inspired by another piece of Elmore Leonard fiction; art, imitating art, imitating art, the one feeding off the other, feeding off the other, and so on. And if Leonard, suitably inspired by what the makers of Justified have done with the stories he wrote having been inspired by what they'd done with the original stories he wrote, chooses to write yet more Raylan Givens stories, which the makers of Justified then base further stories on...

...well then I think my head might just explode. 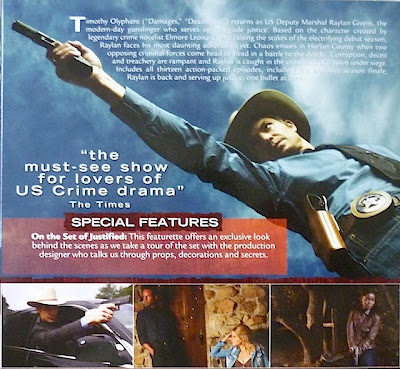