Get Shorty by Elmore Leonard: a British First Edition (Viking/Penguin, 1990)

Just a wee (er, ish) addendum to Monday's post on Elmore Leonard's new novel Raylan and its relationship to Justified, the TV show which both inspired it and was itself inspired by earlier Leonard/Raylan Givens stories – I mentioned in that post that Martin Amis once described Leonard's 1990 novel Get Shorty – which was, of course, filmed (quite successfully, although not as successfully as Justified) by Barry Sonnenfeld in 1995, with John Travolta in the role of gangster-turned-movie mogul Chili Palmer, and followed by a sequel, the not-quite-as-good Be Cool, in 1999, which was also filmed (rather less successfully), this time by F. Gary Gray in 2005 – as "a masterpiece", and that I wholeheartedly agreed with his assessment. (That Amis quote, by the way, I spotted the other weekend in this excellent Guardian essay on Leonard by Philip Hensher.) But it struck me whilst writing that post that despite Get Shorty being not only my favourite Elmore Leonard work but also one of my favourite novels, period, I didn't actually own a copy (I believe I borrowed the one I read from Beckenham Library in the early-'90s).

Naturally I immediately set about rectifying this egregious state of affairs, and went in search of a first edition of the book. A straightforward task, you might reasonably assume, since first editions of Get Shorty litter the likes of AbeBooks and Amazon Marketplace like bodies litter Leonard's backlist. Ah, but you see, the vast majority of those are the American first edition, published by Delacorte Press; the British first edition is in much shorter supply – and even shorter now that I have this: 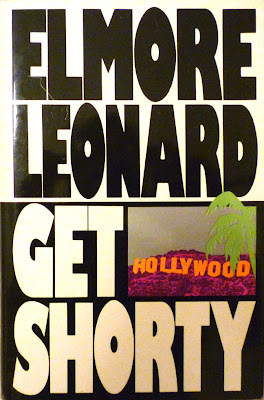 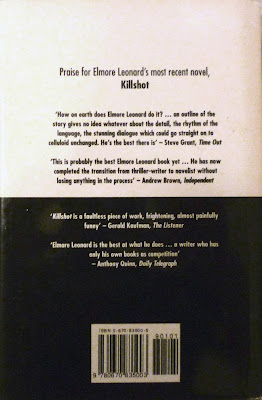 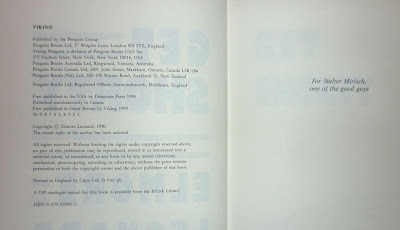 A near-fine copy of the British first edition/first impression, published by Viking/Penguin in the same year as the Delacorte first, 1990, my acquisition of which reduces the available number of British firsts on AbeBooks worldwide to, currently, eight – and two of those are ex-library. Of course, since the Viking edition and the Delacorte edition are virtually identical – same dustjacket design, same interiors (bar the copyright page) – you'd be forgiven for wondering why I'd want the British edition anyway, especially since it's probably printed, like most British editions of American books, on what's almost certainly an inferior paper stock. But I'm afraid the only explanations I can offer there are (i) because it's scarcer than the American one; (ii) because I'm British myself, and therefore guided by a misplaced pride in my homeland; and (iii) because I'm an idiot.

The jacket design is uncredited, but it's done in the same "big book look" style as the covers of all of Leonard's novels around this early-1990s period – see also Maximum Bob (1991), Rum Punch (1992) and the Raylan Givens novels Pronto (1993) and Riding the Rap (1995) – and will be very familiar to readers of a certain age (i.e., my age). I know that the illustrations on the covers of those last two are by Mark Taylor, so it's a fairly safe bet that the illo of the Hollywood sign on Get Shorty is by Mr. Taylor, too.