After yesterday's breaking news story about spy novelist Helen MacInnes's return to print, it's back to Desmond Cory's Johnny Fedora espionage series. And having thoroughly explored the series-closing Feramontov Quintet – and there are some great comments on those posts now, including some fascinating additional info on the last one, so do check those out if you haven't already – I'm heading deeper into Johnny Fedora's past now, with two first editions dating from earlier in his literary career. Let's take a gander at this one first: 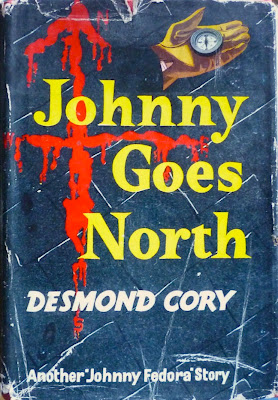 A UK hardback first edition of the seventh Johnny Fedora adventure, Johnny Goes North, published by Frederick Muller in 1956. Similar to the five-book Feramontov series-within-a-series, Johnny Goes North is the first in a loosely linked run of Fedora novels, at least titularly; it was followed by Johnny Goes East (1957), Johnny Goes West (1958) and Johnny Goes South (1959). The effect was slightly ruined, however, when three of the four were retitled for paperback publication (either by Award in the States or Four Square in the UK) as The Swastika Hunt (...North), Mountainhead (...East) and Overload (...South). 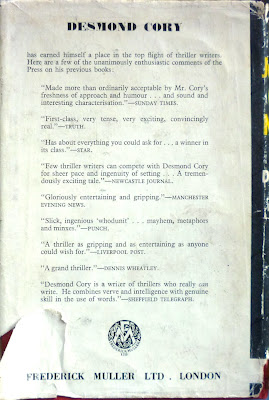 There's no credit for the dustjacket illustration on the Muller edition of Johnny Goes North... but it looks suspiciously like the work of British illustrator/comics artist Denis McLoughlin to me. Only problem is, I don't know if McLoughlin ever worked for Muller; he's primarily associated with T.V. Boardman, although he did do covers for others publishers besides. Go compare the Johnny Goes North cover to the ones in these Boardman/McLoughlin galleries and see what you think.

(UPDATE 1: Actually, scratch that; I think I can see a signature on the artwork, but I can't quite read it. Doesn't seem to be McLoughlin's, though; bear with me while I do some more digging.)

(UPDATE 2: OK, looks like the signature is "Chambers", but I've not yet been able to work out who that is/was. I'll update when I have.)

As for the story, according to the jacket flap copy that sees Johnny Fedora, freelance operative for British Intelligence, embarking on a Europe-wide chase with his pal Sebastian Trout of the Foreign Office following the death in Venice of an American writer and "the mysterious disappearance of a glamorous Swede". (I've been linking the Desmond Cory Website throughout this run of posts, but the Spy Guys & Gals website also has a pithy summary of this book and the other Fedora adventures, plus a good introductory overview.) 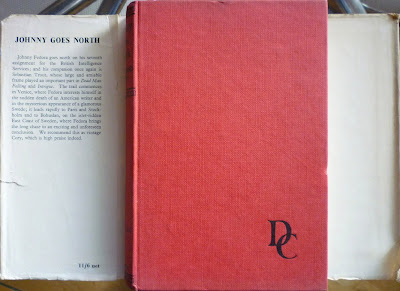 As with others of Cory's Fedora novels, Johnny Goes North is quite hard to come by, either under its original title or as The Swastika Hunt. As you can see, the jacket on my copy, which came from one of those bulk secondhand internet booksellers I usually try to avoid, is a bit battered, and although there is one other, rather nicer copy of the Muller first on AbeBooks at present, it's in Australia (the only other copy is also in Australia, and is ex-library). For any Americans interested in a cheaper alternative, there are currently two Award paperbacks of The Swastika Hunt on AbeBooks... and that's about it for available copies online.

But as uncommon as Johnny Goes North is, it's still not as scarce as the second Cory/Fedora novel I'm showcasing in this post: 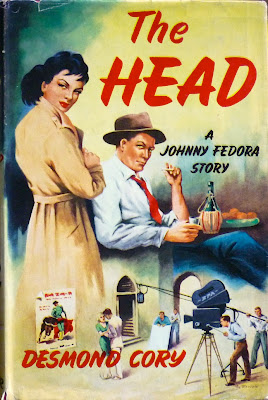 A British hardback first edition of The Head, published by Frederick Muller in 1960. The eleventh Fedora novel, this one is incredibly rare: there are, to my knowledge, currently no copies whatsoever of any edition of the book for sale online. My one was a lucky eBay win, from an auction run by the Northampton Bookshop, which, judging by the pictures on its website, looks like it'd be well worth a visit (not that I'm likely to be anywhere near Northampton in the foreseeable future, mind). Once again the dustjacket is uncredited... but there is a signature at bottom right of the illustration, which I can just make out: Ray Theobald. Theobald is perhaps better known for his science fiction art than for illustrating spy or crime fiction – there's a bibliography of his distinctive SF covers here and a short note on him here – but he did work in other genres, and there's an absolutely corking example of one of his crime covers here. 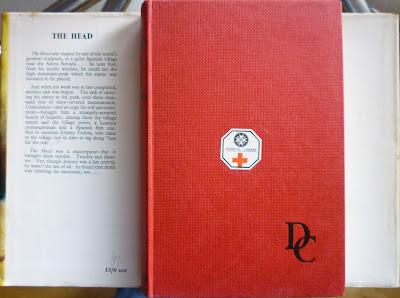 In the Johnny Fedora series The Head nestles between the North/East/West/South quartet and the Feramontov Quintet, which began with Undertow in 1962 (see the Fedora bibliography on the Desmond Cory Website). But it shares with the five Feramontov novels a common setting: Spain, a country Cory knew very well indeed. That said, it's an unusual entry in the series as a whole: it sees Johnny pitted not against a person (or persons), but a thing – a mountain, to be precise, as Fedora and a group of village locals attempt to move a statue to the mountain's peak.

There's just one final post to come now in this current Cory run, and for that one we're heading right back to the beginning of the Johnny Fedora series, with a review of a novel that's quite different in tone from the later books, in a rarely seen edition that took me on a (virtual) adventure to the continent of Africa. And therein lies a tale in itself...
Posted by Nick Jones (Louis XIV, the Sun King) at 07:04