Continuing this run of posts on British thriller writer Desmond Cory's series of spy novels starring secret agent Johnny Fedora (after a brief Len Deighton interlude), next it's the turn of the second book in the Feramontov Quintet – the five novels which close out the Fedora series, which all feature feline Russian spymaster Feramontov – Hammerhead: 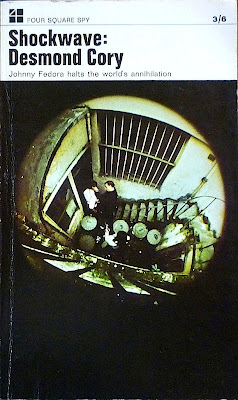 Except, as you can see, that's not the title which graces the above book cover. That's because, in common with others of Cory's novels (see the bibliographies on the Desmond Cory Website), Hammerhead was retitled for American publication, in this instance by Walker in the States, who issued the book in hardback as Shockwave in the same year (1963) as the British Frederick Muller hardback edition of Hammerhead. Indeed, the Muller edition was destined to be the book's only appearance as Hammerhead; thereafter, the novel became known as Shockwave even in the UK, where Four Square published a paperback edition under that title in 1966.

All of which is a little tiresome, I'm sure, for those with an, at most, nominal interest in publishing or collecting matters, but it does go some way towards explaining why the cover you can see above is the Four Square paperback of Shockwave – the remainder of the explanation being that I couldn't for the life of me find a readily available British or American hardback first edition (as I mentioned before, many of Cory's books have become uncommon in all editions). No matter, though. This paperback'll do me fine until I find a first – and in truth, I was slightly less taken by Hammerhead/Shockwave than I was by Undertow. 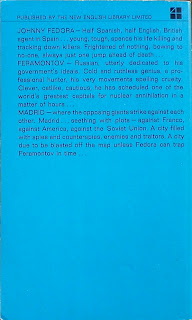 Don't get me wrong: Shockwave definitely has its merits. The story sees Johnny Fedora, freelance operative-cum-assassin for British Intelligence, back in Spain (Madrid this time) at the behest of Marisa de Camba – with whom, I believe, Johnny shared an adventure in The Head (1960), the Fedora novel prior to Undertow (1962). Marisa wants Johnny to look into the murky circumstances surrounding the death of a friend of hers, Sofia Domecq, and sends him to an investigative journalist, who explains that Sofia was the mistress of influential industrialist Chaval. It appears that Sofia was in possession of damaging information about Chaval's role in the Civil War, and about Chaval possibly running a drug ring in Madrid. And not only that, but Johnny learns separately from his British handlers that Chaval's company installed the electrics in a number of American "H-bomber" bases – and furthermore, the Brits have reason to believe Feramontov is somehow mixed up in all this.

In an effort to unravel the various strands of the case, Johnny and another friend of Marisa and Sofia's, Carlota, attend one of Chaval's parties, and here we encounter a scene which typifies Desmond Cory's unusual approach to thriller-writing. Johnny is caught snooping round Chaval's house, but rather than concoct a cover story, as, say, James Bond might do, Fedora comes right out and reveals that he's investigating whether or not Chaval murdered Sofia. After a violent struggle, Johnny is ejected from the party; when Carlota subsequently asks how his encounter with Chaval went, Fedora responds (somewhat prophetically), "Like a bomb," before adding after a pause: "...Right off in my face."

It's a neat illustration of Fedora's character. In many ways Johnny is a blunt instrument, prone to tackling a problem head-on – something Chaval experiences again before too long, when Fedora tortures him to get to the truth. Much of this interrogation takes place off-page, but it's no less horrific for that – and neither is a preceding passage, where Johnny uses two kitchen knives to dismember a dead body and then stuffs the pieces into a suitcase, afterwards telling a tied-up Chaval, who's complaining of cramp, "You'd feel even worse inside a suitcase. And you may come to that, even yet." For all Johnny's civilized trappings – his  talent on the piano, for example – Cory leaves us under no illusions that Fedora is a cold-blooded killer. 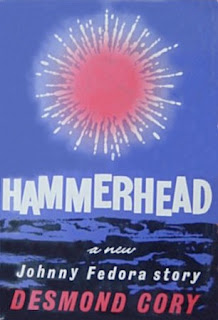 For his part, Feramontov possibly features even less in Shockwave than he did in Undertow. But whereas in Undertow, Feramontov's goal was rather low key – the retrieval of a ship's logbook – in Shockwave his scheme is both breathtaking in scope and apocalyptic in scale, with nothing less than the survival of Madrid at stake. Conversely, however, despite these high stakes, Desmond Cory's narrative is even more relaxed than in Undertow. The languorous interludes which peppered the previous Fedora outing are in evidence here, too, but although these do help to throw the explosions of violence – more extreme than before – into sharp relief, the pacing overall is perhaps a little too lackadaisical this time out, and those who complain of nothing happening in Cory's novels will find ample ammunition in Shockwave.

Even so, I still wouldn't place myself in the "Cory is boring" camp – not by a long chalk. The introspective nature of parts of Shockwave for me make the book more interesting – as do the novel's political aspects: Cory further develops here his intriguing and unconventional notion of Spain being at the centre of the struggle between East and West. That theme of Spain acting as a fulcrum in the Great Game would persist in the remaining Feramontov novels, and I'll be looking at first editions of two of those in the next Cory/Fedora/Feramontov post...
Posted by Nick Jones (Louis XIV, the Sun King) at 08:57