I had intended this to be the final post in this current series on British author Desmond Cory's Johnny Fedora spy novels... but on reflection, I've decided to extend the run slightly. I'll explain how and why at the end of this post, but first, having reviewed books one and two in what's known as the Feramontov Quintet – the five-book series-with-a-series which finishes off the Fedora thrillers, and which all pit Johnny against Soviet spymaster Feramontov – Undertow (1962) and Hammerhead (1963, alias Shockwave), let's take a look at two further Feramontov novels I've managed to find in first edition. 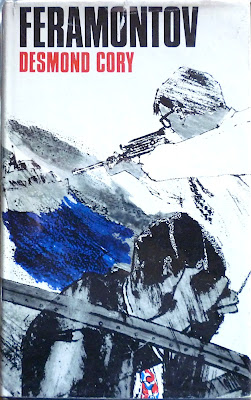 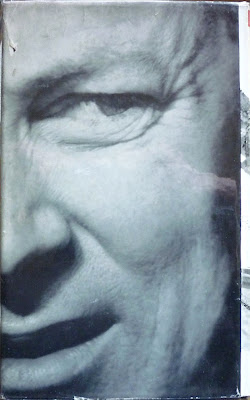 First up, a British hardback first edition of Feramontov, the third book in the Feramontov Quintet – and the fourteenth Johnny Fedora novel overall – published by Frederick Muller in 1966. The jacket design is credited to Klim Forster, about whom I've been able to determine very little, although he did illustrate the cover to the 1967 Macmillan edition of Jean Stubbs's My Grand Enemy, and a 1972 Daily Telegraph Magazine article titled "The Major and the Macaroni" by journalist and Labour MP Chris Mullin (whose excellent diaries are well worth a read). 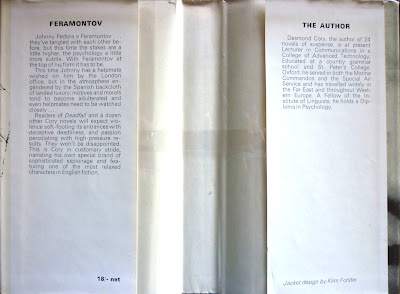 I mentioned in my introductory Desmond Cory/Johnny Fedora post that many of Cory's Fedora novels have become decidedly uncommon in first edition (or any edition in some cases), and although the Muller first of Feramontov isn't the scarcest of the Fedoras, it is still in short supply: AbeBooks currently has just three copies listed, one of those lacking a dustjacket. Set once again in Spain, the story sees Feramontov eliminating British agents; on publication in the States the novel was reviewed in the New York Times Book Review alongside Ian Fleming's James Bond novel Octopussy, the latter dismissed as "a thin and even emaciated volume", while Feramontov was hailed as being full of "colorful action, copious carnage, elaborate intrigue, frequent surprises" (see article "The Evolution of Desmond Cory" on the Desmond Cory Website).

Cory was often compared with Fleming, even though Johnny Fedora beat Bond into print by two years (the debut Fedora outing, Secret Ministry, appearing in 1951; Casino Royale wasn't published until 1953), and the second Feramontov Quintet novel I'm showcasing in this post was even more directly contrasted with Fleming's work – and just as favourably: 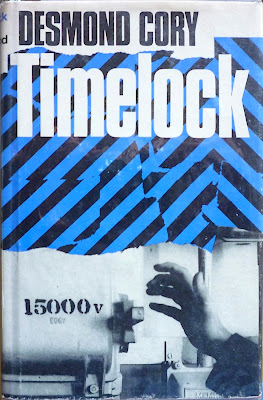 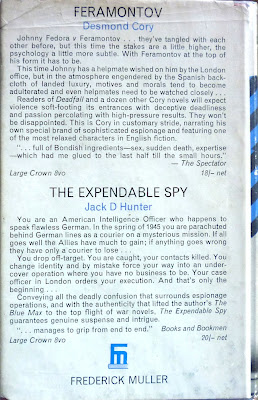 First published in hardback in the UK by Frederick Muller in 1967, Timelock is the fourth Fermaontov novel (and the fifteenth Fedora outing). The jacket design in this instance is credited to Abis Sida Stribley, a designer who was also a photographer; Stribley's photographs illustrated the original 1965 Woman's Own serialization of Agatha Christie's novel At Bertram's Hotel (I'm assuming the photo on the cover of Timelock is Stribley's, too). Set, like the other Feramontov novels, in Spain, Timelock is notable for the fact that Fedora and Feramontov actually meet this time; previously they'd only set eyes on each other from afar. 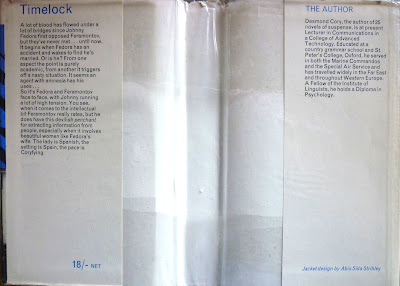 I bought this copy in Dim and Distant in Heathfield, East Sussex, but the Muller edition is practically common as muck in comparison with other Cory firsts: AbeBooks currently has a staggering five copies listed (although one of those might be sans jacket). As mentioned above, Timelock was again juxtaposed with Fleming's 007 adventures, this time by writer and critic Anthony Boucher, who wrote in his New York Times Magazine column Criminals at Large: "I must say once more that I find Cory's Johnny Fedora a much more persuasive violent, sexy and lucky agent than James Bond." (Again, see "The Evolution of Desmond Cory" on the Desmond Cory Website.)

I had, as I say, planned to leave it at that for now for the Cory/Fedora posts – I'm still on the hunt for an affordable first of the final Feramontov – and Fedora – novel, 1971's Sunburst – but I do actually have in my possession one or two other, earlier books from the series (I've been a busy little bee, as per usual), one of which is particularly exciting. So rather than save those for a later date, let's carry on with Cory a wee while longer, with another first edition showcase post... and another review.

Before that, though, look out for some breaking news regarding a different spy novelist – a contemporary of Cory's whose novels are all out of print... but not for much longer...
Posted by Nick Jones (Louis XIV, the Sun King) at 05:30