Interrupting my now-extended series of posts on Desmond Cory's Johnny Fedora spy novels, here's a rather exciting announcement for you. Regular readers may recall my having broken the news in December of Donald Hamilton's Matt Helm spy novels being brought back into print by Titan Books. Well Existential Ennui is first with the news once again, because I'm pleased to report that Titan will soon be bringing another spy novelist back into print – this time an author who was known in her day as the Queen of Spy Writers (as well as the Queen of Spy Fiction and the slightly more cumbersome Queen of International Espionage Fiction): Helen MacInnes. 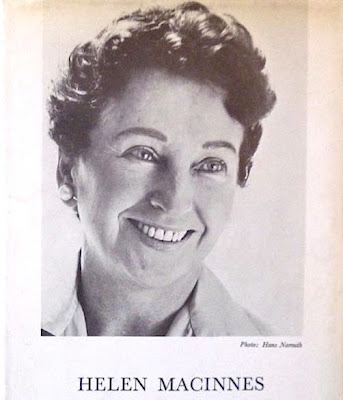 One of a select band of female espionage novelists (Sarah Gainham being another), MacInnes's career as a writer began in 1941 with the publication of her debut novel, Above Suspicion, which was turned into a Joan Crawford/Fred MacMurray film in 1943. She had a further twenty novels published over the next forty-plus years (and one play), a number of which were also filmed, including The Venetian Affair (1963, the Robert Vaughan-starring movie of which arrived in 1967) and The Salzburg Connection (1969, filmed in 1972; that's the Collins first edition you can see below). Like Gainham's protagonists, MacInnes's leads were usually amateurs rather than professional spies, and her novels were hailed by critics and fans as credible, plausible espionage thrillers. 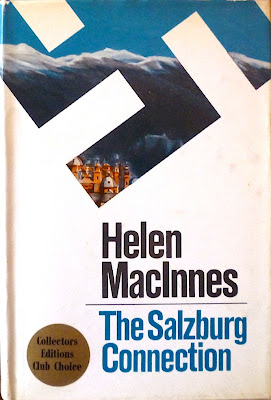 And starting this summer, MacInnes's work will once again become widely available, as Titan begins reissuing the author's novels. In a press release, Titan Books' Editorial Director, Katy Wild (who knows her onions when it comes to crime and spy fiction, believe me), explained: "I have loved Helen MacInnes's novels all my life. They are exciting stories, immaculately researched, but with immense integrity and heart. I always felt that she had been unfairly neglected in the revival of interest in the classic spy thriller genre, so I was delighted when I was able to enter into an agreement with her descendants. Our agreement with them will enable us to bring the books back into print and e-book formats and show readers what they've been missing all these years."

Quite so. There'll probably be an official announcement tomorrow (so remember where you read the news first), and as ever I expect there'll be further details down the line, so keep 'em peeled. For now, though, it's back to Desmond Cory and Johnny Fedora here on Existential Ennui, with a couple of quite scarce first editions...
Posted by Nick Jones (Louis XIV, the Sun King) at 05:35