Continuing this short run of posts tying in with Britain's party political conference season, we move on from the second volume – or, chronologically speaking, first – of Alan Clark's Diaries, to the first volume – or rather, second: 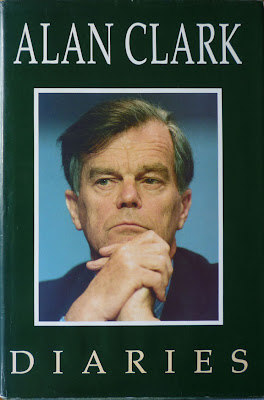 Alan Clark's Diaries were first published in hardback by Weidenfeld & Nicolson in 1993. I can't actually recall where I bought this first edition/first impression, but the UK hardback went through umpteen printings, so while first editions litter the likes of AbeBooks and charity and secondhand bookshops up and down the land, first impressions aren't so common. This volume, which covers the years 1983–1991, has picked up a subtitle since its original publication, and is now known as Diaries: In Power. It caused quite the sensation when it first appeared, for all manner of reasons, but primarily for the light it shed on the Arms to Iraq/Matrix Churchill affair – with which Clark, as Minister of State for Trade in the Conservative Government, was intimately involved – and for the infamous affair Clark was embroiled in with a mother and both of her daughters (together nicknamed "the Coven"). 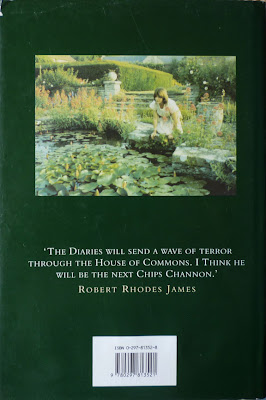 I'll be returning to that disgraceful multiple dalliance in the third and final political diaries post, but it's worth reiterating here how exceptional Clark's Diaries in general – and this volume in particular – are, almost in direct proportion to how objectionable he himself was. His political views are pretty much the polar opposite of mine, and certainly to the right of even the most foaming of true-blue Tories, while he was an absolute shit to his wife and the most horrendous snob. But his near-fascistic leanings, his fawning appreciation of Margaret Thatcher (whom he called "the Lady"), his rampant libido and his attempts to cast himself as a Lord in all but name – forever bemoaning the state of Saltwood (his inherited Kent castle home) and his need to sell off its treasures in order to fund his mania for classic cars and his high stakes gambling – are what make this initial offering of his Diaries so compulsively readable – that and the fact they're beautifully written. 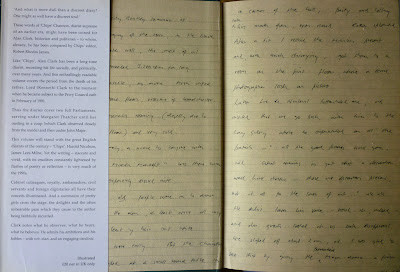 Of course, like many diarists, Alan Clark didn't write his Diaries in a vacuum. Committed diarists are usually well aware of their journal-writing forebears, and one diarist in particular exerted a profound influence on Clark: 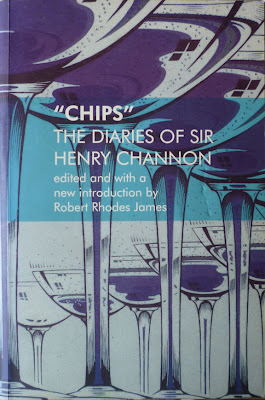 Chips: The Diaries of Henry Channon was first published in hardback in the UK by Weidenfeld & Nicolson in 1967; the edition seen here is a more recent paperback edition from 1993, re-edited and with a new introduction by Robert Rhodes James, and presumably issued to tie in with the publication of Clark's Diaries. Like Clark, Channon was a relatively minor political figure in the period his diaries cover – 1934–1958 – but, also like Clark's, Channon's diaries afford an outsider's clear-eyed viewpoint on momentous events, including the 1936 abdication of Edward VIII and the fall of the Chamberlain Government in 1939–40. 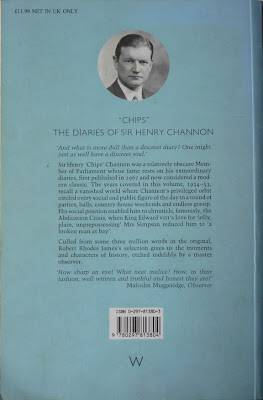 Channon was as much of a snob as Clark, and equally as distasteful in his own way, but his diaries are elegantly written and endlessly fascinating. Clark frequently mentions Chips in his own Diaries; according to Alan Clark's editor, Ion Trewin, Clark kept Channon's diaries close to hand, and "rarely failed to dip [into them] with his early morning tea". Unlike Clark's Diaries, however, Channon's have fallen out of print; the last edition was a 1996 paperback, and AbeBooks currently lists just thirteen copies of Chips in any edition, the cheapest being about forty quid. (I bought my copy in Brighton Books years ago, for much less than that.)

No such problem with the final volume of diaries I'll be looking at, however: those are in cheap and plentiful supply, in first or any edition, a consequence, perhaps, of the low esteem in which their author is held these days...
Posted by Nick Jones (Louis XIV, the Sun King) at 06:47