This latest Westlake Score – which, for those who've evidently been dozing or "goofing off" at the back of the class, are posts in which I detail newly acquired editions of various of Donald "Richard Stark" Westlake's novels – may not look like much to you, chief, but to me it represents another step on the path towards owning every one of Richard Stark's Parker novels in hardback. 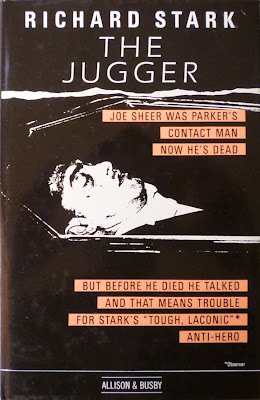 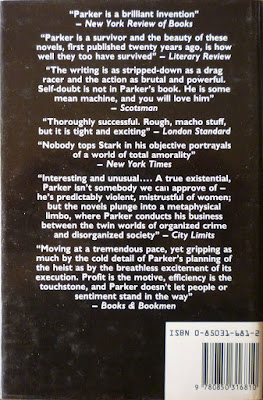 Published in 1986, this is the Allison & Busby hardback edition of The Jugger – the sixth Parker novel, originally published in the US in 1965. To recap: in the 1980s, British publisher Allison & Busby reissued almost all of the initial thirteen Parker novels – from Point Blank (a.k.a. The Hunter) to Slayground – in hardback, the first time that many of those novels had been made available in that format. (A&B also published Deadly Edge – Parker #13 – in 1990, but only as a paperback.) For book collectors, then, the Allison & Busby editions afford almost the only opportunity to own those twelve Parkers as hardcovers. Almost... but not quite. I'll return to that in a moment.

Of course, this is something that only really matters to book collectors – for whom hardbacks are always preferable to paperbacks – but matter it does (to us), and consequently a good number of the A&B hardcovers have become quite scarce and rather valuable. For instance, I had to order this copy of The Jugger from New Zealand – from the lovely folks at Codexco, Christchurch, an undertaking which gained an additional wrinkle with the recent earthquake there – while AbeBooks currently lists just two other copies of this edition, the cheapest of those being fifty quid. Mind you, the A&B editions are an imperfect solution to a collecting conundrum: about half of the Parkers they reissued were printed on inferior paper stock, which has since browned, and all of them are littered with typos. (Allison & Busby were once described to me by a secondhand bookseller as "a cowboy outfit".) The dustjacket designs are an acquired taste, too; most were designed by Mick Keates, and while I do like the first wave of jackets he created, with their bold typography, the second wave – which included The Jugger – I'm less keen on. 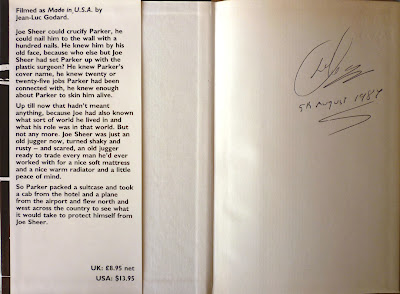 Even so, the Allison & Busby Parkers are much in-demand by collectors, and always command good prices when they (infrequently) appear on eBay. However, at least as regards a scant few of those thirteen Parker novels, there is another option for collectors. Because some of those Parkers were published as hardbacks a good decade or so prior to the Allison & Busby editions. They're incredibly scarce, and little-seen... but in my next Violent World of Parker/Existential Ennui cross-post, I'll be showcasing all three of them.

Meanwhile, on the non-Westlake/Stark front, next week I'll hopefully have a couple of reviews for you, both of them novels set – although published sometime after, in 1978 and 1979 – around World War II. One of those books is by Len Deighton, and the other sees the return to Existential Ennui of our good friend, Ross Thomas...
Posted by Nick Jones (Louis XIV, the Sun King) at 04:06