Rounding off this intermittent series of posts on crime novelist Donald E. Westlake's early-1960s science fiction stories, I've a particularly pithy tale which Westlake was the co-writer of, rather than the sole author. And of all the SF stories I've been reviewing in this series and the previous series, I think this might just be my favourite. 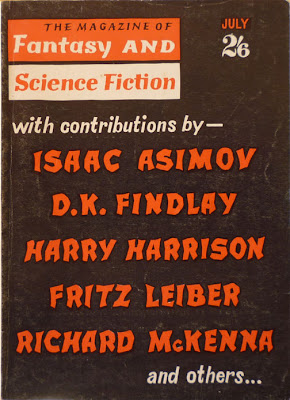 "The Question" was first published in the States in the March 1963 issue of The Magazine of Fantasy and Science Fiction, although the one you can see above is the British edition, published some months later in July. Westlake's co-author was Larry M. Harris, alias Laurence M. Janifer, a science fiction author who also penned a handful of sleaze paperbacks, which is possibly how his and Westlake's paths crossed (as in, Westlake also wrote sleaze softcovers, rather than our Donald was devouring them or anything). "The Question" was later reprinted in the 1978 Doubleday collection 100 Great Science Fiction Short Stories, edited by Isaac Asimov (with Martin Harry Greenberg and Joseph D. Olander), so it's slightly easier to come by than some of the other Westlake SF short stories I've reviewed. It's also a decidedly short short, clocking in at just two-and-a-half pages. 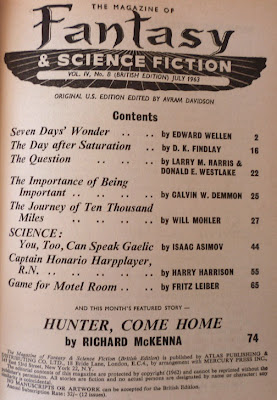 Now, I've tried to keep these reviews of Westlake's science fiction largely spoiler-free, but in this instance, I'm going to go ahead and reveal the ending, because it's so intrinsic to the nature of the tale. Therefore, if you have any intention of sampling "The Question" – and if you do, you'll be better off tracking down the American edition of F&SF or the Asimov collection, for reasons I'll return to in a moment – stop reading now. 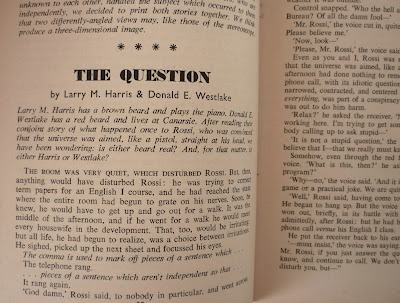 The story begins with an irritable, solipsistic sort named Rossi – "sometimes prey to the impression that the universe was aimed, like a pistol, straight at his head" – sitting alone in a room marking English term papers. The telephone rings, and a voice asks him what the weather's like outside... At least, I assume that's what is asked, because in the British F&SF in which "The Question" appears, there's be a line of text missing. The offending section runs like this:

'Hello there,' a voice on the other end said, a bright and cheery weather it was, outside.'

The missing line falls between "cheery" and "weather", but luckily, the question is repeated shortly thereafter, so I can get the gist of it. Anyway, Rossi quickly becomes infuriated by this asinine line of enquiry. The voice, however, is insistent, and after almost slamming down the receiver, Rossi's curiosity gets the better of him, and he informs the voice that "it looks like a nice day". That's not quite enough for the voice, so Rossi explains that it's a little cloudy. "You can't see the sun, you say?" responds the voice, and after Rossi concurs, the voice thanks him. But just before the voice rings off, Rossi overhears something evidently not meant for his ears:

Just a few words, but in those few words Rossi realized that he had been right, right all along. Everything centred around Rossi. Maybe he would never know why, or how. But the world, the entire world, was—truly and completely—aimed right at the Rossi head.

And what are those few words?

And with that, the story ends. It's a metaphysical head-scratcher, for sure: the eponymous question applies not only to the one posed by the anonymous caller but to the tale itself, which left me with more questions than answers. One thing it brought to mind for me was The Truman Show (1998), which also played with the concept of solipsism and the juxtaposition between apparent normality and a secret world behind the scenes. Certainly Westlake and Janifer adhere to the dictum of "less is more" with the story, although it could be argued a little more of the "more" might have been of benefit; Rossi and his surroundings are so lightly sketched that the eventual punchline lacks some impact. However, that's a minor quibble. "The Question" does precisely what it sets out to do, namely leave the reader utterly perplexed and pondering the meaning of that final line of dialogue. 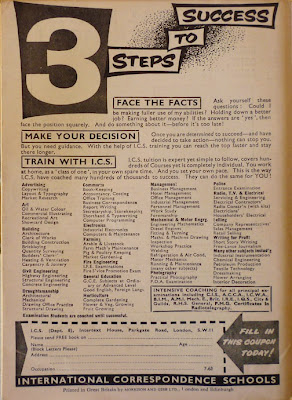 And that's yer lot for Westlake SF – at least for the moment; there'll be an additional SF post down the line. Next on the non-SF Westlake front I'll probably have a Westlake Score, but ahead of that, with the annual political party conference season in full swing here in the UK, I'm heading slightly off piste from Existential Ennui's traditional concerns with a selection of politically-themed books, all of which, to a greater or lesser degree, have a link to a celebrated diarist, famous philanderer and notoriously right-wing Member of Parliament...
Posted by Nick Jones (Louis XIV, the Sun King) at 07:55