We're in the midst of the political party conference season here in the UK; this week it's the turn of the Labour Party, who have descended en masse on Liverpool to debate how they can make Ed Miliband seem dynamic and purposeful – or at the very least mildly interesting – while last week the Lib Dems invaded Birmingham and next week the Tories will take Manchester, all to the overwhelming indifference of the British populace. (All three main parties have forsaken their traditional seaside conference locales this year for some reason.) So, in a slight change of tack from Existential Ennui's regular course, I thought I'd take a look at a few politically themed books this week – a mixture of recent and older acquisitions, all of which take the form of diaries, and all of which are connected in some way to this man: 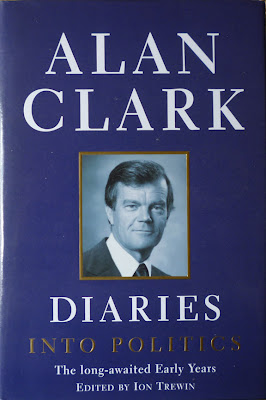 Alan Clark, for those who don't know, was the Conservative Member of Parliament for Plymouth Sutton from 1974–1992 and for Kensington and Chelsea from 1997 until his death in 1999. He held various junior governmental posts, including Minister of Trade at the DTI and Minister for Defence Procurement at the MOD, and became a privy councillor in 1991. He was a historian (and son of another famous historian, Kenneth Clark, the man behind the television series Civilisation), an author, a serial philanderer, a collector of classic cars, an inveterate snob and a frequent gambler who lived in an inherited castle in Kent (whose treasures he occasionally flogged off in order to sustain his extravagant lifestyle), skied regularly in Switzerland and held political views only marginally to the left of those espoused by Germany's National Socialists (he was an admirer of Enoch Powell, and once called himself a Nazi in a letter to The Guardian). But above all he was a committed diarist, and it's in this capacity that he's best remembered today. 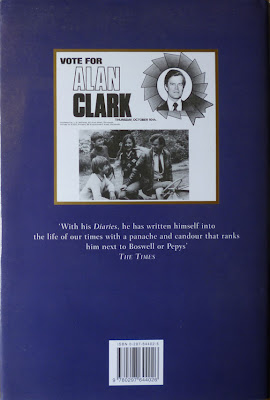 Published in three volumes, Clark's Diaries are by turns revealing, insightful, hilarious, hypochondriacal, vain, narcissistic and utterly disgraceful, and rank among the best political diaries ever committed to paper, rivalled only by those of Samuel Pepys and especially Henry "Chips" Channon, on whose diaries Clark modelled his own. They are, quite simply, brilliant, characterized by an elegant and fluid style, and shedding light on the life of an MP – albeit a highly unusual and idiosyncratic one – and the inner workings of government. (John Hurt – who was so magnificent recently in Tinker Tailor Soldier Spy – played Clark in a 2004 BBC adaptation of the Diaries.) 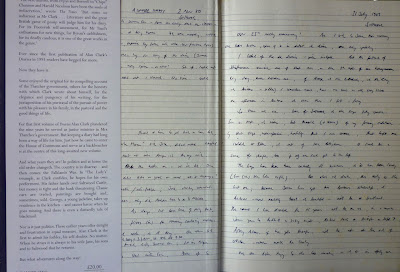 The volume seen in this post was the second to be issued, but chronologically is the first in the series, covering the years 1972–1982, and was published posthumously in 2000. I picked up this hardback first edition/first impression for a couple of quid (which is about what you'd pay for it online, except without the additional postage) in a Chichester charity shop (having already read it in paperback) during my summer hols, partly because Clark's Diaries are among my favourite books ever, but also because it makes for a nice companion to one of the books I'll be blogging about in the next post, which will encompass both another volume of Clark's Diaries, and the diaries which exerted the biggest influence on Clark's...
Posted by Nick Jones (Louis XIV, the Sun King) at 04:49