A Signed (er, by Someone...) First Edition of The Silver Swan by Benjamin Black (John Banville), Plus Christine Falls and a Bit of Richard Stark Parker Business

On with the signed editions we go, and here's a book I picked up just last weekend on an inaugural visit to Dim and Distant, a terrific secondhand bookshop in the small town of Heathfield, East Sussex:

The Silver Swan was published in hardback by Picador in 2007. Benjamin Black is, of course, the crime-writing alias of literary giant John Banville, and while I wasn't terribly keen on the single Black novel I've read – 2008's The Lemur – the critical weight of opinion on his expanding criminal oeuvre convinced me to put down four quid for The Silver Swan – his second B. Black offering – when I saw it in amongst the extensive selection of hardbacks on offer at Dim and Distant. Well, that, and this: 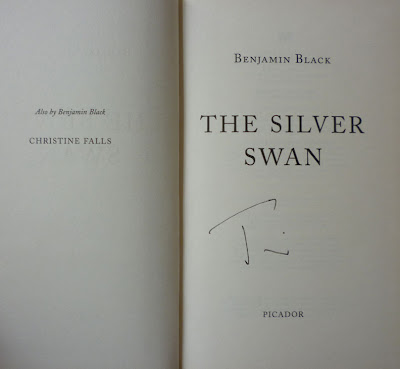 Which I figured was Mr. Banville's abbreviated signature. But having looked online, it doesn't appear to bear any resemblance to other examples of Banville's John Hancock, either his own or his alter ego's. If it's not his signature, though, I'm curious as to why whoever scrawled on it chose to do so on the book's title page, as owner inscriptions usually appear on endpapers. Strange. Anyway, even if it is some random sod's signature rather than the author's, £4 is still a fair price for a first printing, especially as I also found this next to it:

A hardback first edition/first printing of his debut Black novel, Christine Falls, published by Picador in 2006. So I can at least read the first two books in Banville/Black's series centring on Dublin pathologist Quirke in the correct order.

Banville is a fan of a writer who's an abiding obsession of mine, Donald E. Westlake, in particular Westlake's pseudonymous Richard Stark Parker novels. He provided the foreword to The University of Chicago Press' 2009 reprint of The Score (Parker #5), but his appreciation was underlined more recently when The Guardian ran a feature in their Saturday review section in July titled "Partners in Crime Fiction", wherein a variety of contemporary novelists chose their favourite crime writers (to tie in with the Harrogate Theakston's Old Peculiar Crime Writing Festival; my old mucker Keith Walters was one of two "bloggers in residence" at the event and has a series of posts on it on his Books and Writers blog). In his Benjamin Black guise Banville led the article, and his pithy Stark testimonial is well worth a read if you haven't chanced across it yet.

What's next then? Well, if you click on the back cover of The Silver Swan, that might provide a clue as to the identity of the author of the next signed novel I'll be showcasing – and I reckon I'm on much firmer ground regarding the authenticity of that signature. But there could well be another Violent World of Parker post ahead of that, so you'll just have to wait and see which one appears first. Oh the excitement...
Posted by Nick Jones (Louis XIV, the Sun King) at 05:40