An Anthony Price Interview Postscript – Those Signed First Editions of Our Man in Camelot, The Labyrinth Makers and The Alamut Ambush – and an Announcement

Well I hope we all enjoyed my exclusive two-part interview with British spy novelist Anthony Price – part one here, part two here, and also linked to by the estimable Jeremy Duns (thank you, sir). I certainly enjoyed meeting Mr. Price, and if nothing else, at least now there's an extensive interview with the author of the David Audley espionage novels freely available online for anyone who goes looking for one, something there wasn't previously. Doubtless I'll continue to make my way through Price's fine series, adding further reviews of the books to the four I've already posted (which can be found here, here, here and here), so there'll be plenty more from Mr. Price down the line. But before we move on, it wouldn't be Existential Ennui if I didn't seize with both clammy hands the opportunity to crow unattractively about the books that Mr. Price kindly signed for me when I met him, starting with the American first edition that he himself gave to me: 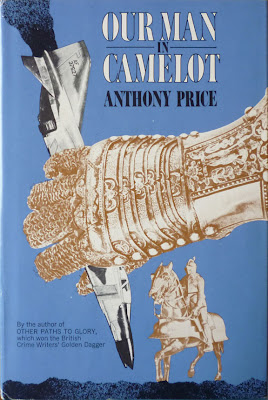 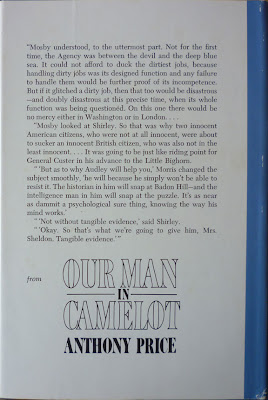 A 1976 US Doubleday hardback first edition of Our Man in Camelot, the sixth novel in the series (originally published in the UK by Gollancz in 1975), with a dustjacket designed by John Sposato. This is the novel which Price revealed to me was inspired by a US Air Force pilot who lived up the road from him and who mistakenly believed the author wrote about King Arthur, prompting Price to combine in one tale both Arthurian and aviation themes. Rather than precis the story myself, however, I'll let you have a look at the jacket flap copy instead (click on the images to enlarge 'em): 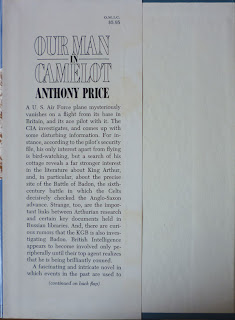 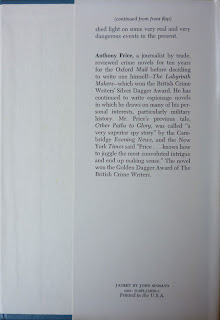 As I mentioned in my interview, Mr. Price signed and dedicated the book to me: 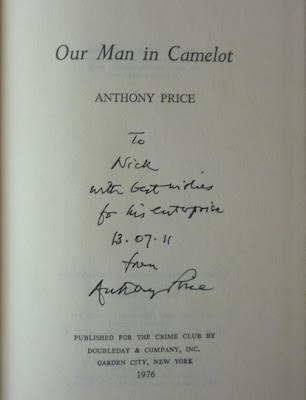 Which, considering there is currently only one other signed copy of this edition listed on AbeBooks, priced at nearly sixty quid, and only one other signed copy in any edition besides (a 1982 Futura paperback, going for more than £45), makes it really rather special. Of course, the fact that the book was given to me by its author makes it even more special, and something that I'll always treasure, but I suppose from a more objective collecting perspective, the other two books that Price signed for me could be seen as being even more remarkable...

See, shortly before I interviewed Anthony Price, as I detailed in this post, I chanced upon Gollancz first editions of the first two novels in the series, The Labyrinth Makers (1970) and The Alamut Ambush (1971). Both were for sale for much, much less than the going rate – anything from £150–£350 and £75–£200 respectively. And it was these two books that Mr. Price kindly signed and inscribed for me: 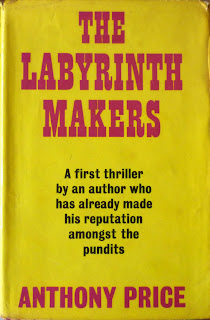 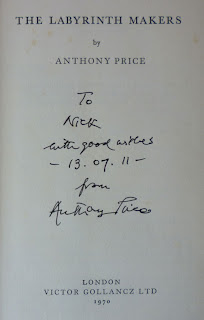 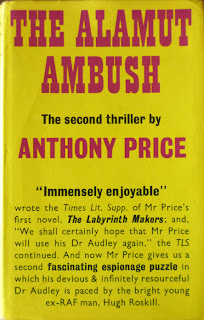 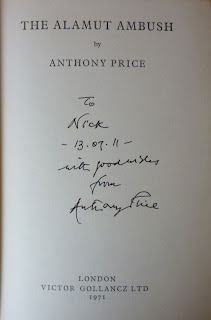 Making them, to my knowledge, the only signed copies of the two novels – in any edition, let alone first edition – available online. Or rather, unavailable online: I'm certainly not selling them. So as to their value... well, we're in the realms of pure conjecture. Pretty bloody valuable, I'd say.

Anyway, if you haven't yet read the Anthony Price interview, go have a look, even if you've never heard of him. You never know: you might find yourself suitably inspired to seek out one of his excellent novels yourself. And having posted one interview with an author, all being well I'll soon have another one to post as well – not quite as extensive as the Anthony Price one, but certainly of interest to admirers of current crime fiction – and indeed current crime fiction television.

Before that, though, I'll be staying with the signed editions for a wee while, with a couple more books bearing Anthony Price's John Hancock which I picked up online before I met the man himself, and then signed editions of novels by Robert Rankin, Eoin Colfer, Joseph Wambaugh, Ian Rankin, and a number of other authors who shall for the moment remain a secret (I don't want to spoil the surprise). Those – plus maybe one or two other bits and bobs – should keep me busy here on Existential Ennui for the foreseeable future (at least until that other interview I mentioned pans out – if indeed it does pan out), but they won't be the only blogging I'll be doing. Because as well as continuing to post dreary, prolix (my new favourite word), books-related nonsense on Existential Ennui, I'll also be posting dreary, prolix, books-related nonsense on another blog, too (besides the aforementioned, day job-related Ilex Press one, I mean).

Which brings me to a little announcement – although it's not so much an announcement by me, as an announcement about me, by someone else. So if you'd care to pop along to this post on this utterly essential website dedicated to a certain career criminal by the name of Parker, I'll be back shortly to elaborate and elucidate.
Posted by Nick Jones (Louis XIV, the Sun King) at 04:31