Let's draw a line under week one of Spy Fiction Fortnight with a little book I was prompted to track down after seeing it mentioned in this PDF article by Jeremy Duns on Dennis Wheatley and Ian Fleming (which is well worth a read when you get the chance). In the article, Duns identifies chapters five and six of Fleming's Bond novel Thunderball (1961) – where we're introduced to Blofeld for the first time – as being directly inspired by an 1894 novel by George Griffith called The Outlaws of the Air. Thing is, by the time Fleming came to write Thunderball, Outlaws of the Air had fallen into obscurity, and it's unlikely Fleming would have had a copy. So how could he have drawn from it? Because he would have had a copy of this book, in which the opening scene from Outlaws of the Air is extracted: 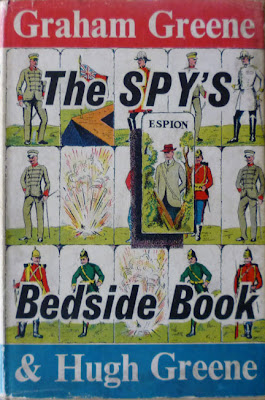 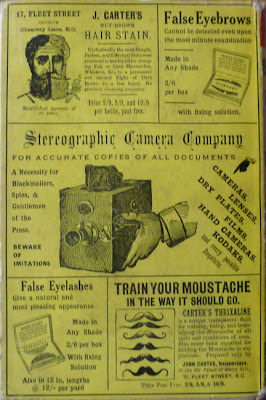 The Spy's Bedside Book was published in the UK in hardback in 1957 by Rupert Hart-Davis, with a jacket designed by A. S. Douthwaite (based on the board game L'Attaque – the front cover, anyway; the back consists of subterfuge-related novelty ads). Edited by Graham Greene and his brother Hugh (who's perhaps better known for being Director-General of the BBC during the 1960s), it's a collection of short snippets from all manner of espionage texts, from novels to stories to true life accounts, sorted into themed chapters. So alongside the aforementioned Mr. Fleming – who makes three appearances under, respectively, Delights of the Profession (an excerpt from From Russia, with Love titled "Foreign Travel"), Professional Prerequisites (Casino Royale, titled "Blanc de Blanc Brut, 1943") and Tricks of the Trade (Moonraker, "Vodka with Pepper") – you also get more factual snippets from the likes of T. E. Lawrence, Robert Baden-Powell and, indeed, Fleming's brother, Peter.

In the Introduction, Graham Greene wonders how many readers "would be able to detect truth from fiction in this anthology if the editors had not printed the names of the contributors... Could the reader really tell which was fiction, between Mr Dennis Wheatley's spy trapped in a bathroom at the Ritz, and Colonel Lawrence's misadventure in Arabia? Of the two I find Mr Wheatley's style a shade more convincing..." Attacking the line between truth and fiction from a different angle, in the Epilogue Hugh Greene relates an episode about enquiring in a secondhand bookshop if they had any spy stories and being asked in return, "What foreign government do you represent?" Turns out the shop had had an order from a foreign government for any book that so much as mentioned a spy, fact or fiction, which resulted in up to fifty large parcels being posted. "I hope," Greene retorted, "that they are enjoying the books in Moscow." "It wasn't the Russians," replied the shop assistant. "It was the Germans."

"No doubt," offers Hugh Greene in closing, "such parcels in the future will always include at least one copy of The Spy's Bedside Book." Well, if one story circling the internet is to be believed, that's precisely what did happen. According to this blurb for the Folio Society edition of the anthology and this Evening Standard story, 100 copies of The Spy's Bedside Book were bought by East German Intelligence. (Unrelated to this, a copy was also later found in Cuban spies Kendall and Gwen Myers's Washington apartment.) I can't speak to the veracity of that tale, but it's striking that in his anecdote, Hugh Greene's nameless shop assistant also fingers the Germans. And there's something else in this edition of the book which, to my mind, casts doubt on the story. Just after the Epilogue, we find this amusing page: 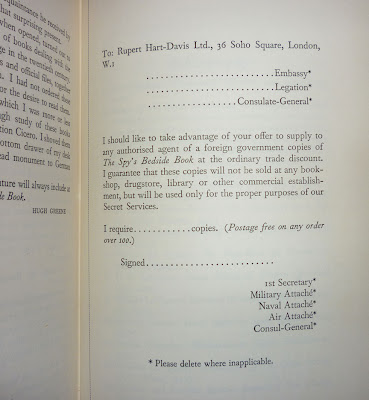 A spoof tear-out order form for foreign powers wishing to buy copies in bulk. Note the parenthetical "Postage free on any order over 100": did the Stasi use the order form, d'you think? (Thus saving themselves the cost of shipping.)

My copy of the book (a first printing/impression, I'll have you know) also has an inscription on the front endpaper which made me smile. You often find inscriptions and dedications in secondhand books – there's a great blog devoted to them – and sometimes they can tell you something about previous owners. This one, I feel, gives a little insight into the motivation behind the dedication: 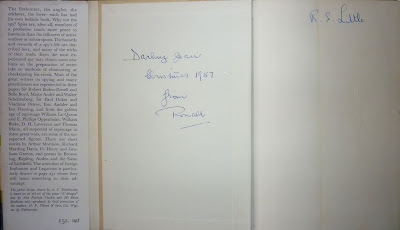 From Ronald to Joan? Not to sound sexist or anything, but surely that should be the other way round? A clear case there, I reckon, of someone giving the gift of a book simply so they can read it themselves.

UPDATE 9/3/11: Jeremy Duns has just made available to me a fascinating piece of contemporaneous paraphernalia, so I thought I'd add it to the post. It's an advert for The Spy's Bedside Book taken from the Guardian – dated 29 November, 1957 – and featuring a blurb by none other than Ian Fleming. It also sports a rather good cartoon of Graham and Hugh Greene depicted as mac-wearing spooks. And here it is: 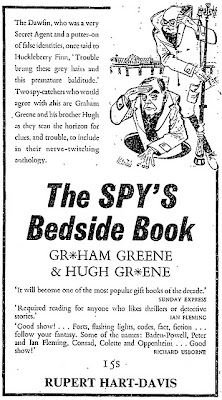 Splendid stuff. Thanks, Jeremy! Anyway, Spy Fiction Fortnight will of course continue next week (the clue's kind of in the title), when we'll have some more from Graham Greene, a smidgen of Mark Gatiss, a soupcon of Ross Thomas, and more besides. See you then.
Posted by Nick Jones (Louis XIV, the Sun King) at 04:38